What would we do in a world without our beloved Above & Beyond? Multi-GRAMMY nominated trio Above & Beyond will broadcast the 400th episode of their cult radio show and podcast, Group Therapy Radio, exclusively on Twitch, Saturday September 26th, from 7pm BST. For your information, 7pm BST is 5 hours ahead of EST, so 2 pm EST, 1 PM CST, etc. You’re welcome for that!
Usually, this event is held in a sold out arena far from Above & Beyond’s home base in the UK. However, this year’s Group Therapy milestone celebration will be recorded on a small sailing boat as it meanders its way through the socially distanced heart of London, the city where it all began for Jono, Tony, and Paavo. We’re so thankful that despite not being able to share in this event in person, we will be able to enjoy it safely and from the comfort of our own homes! 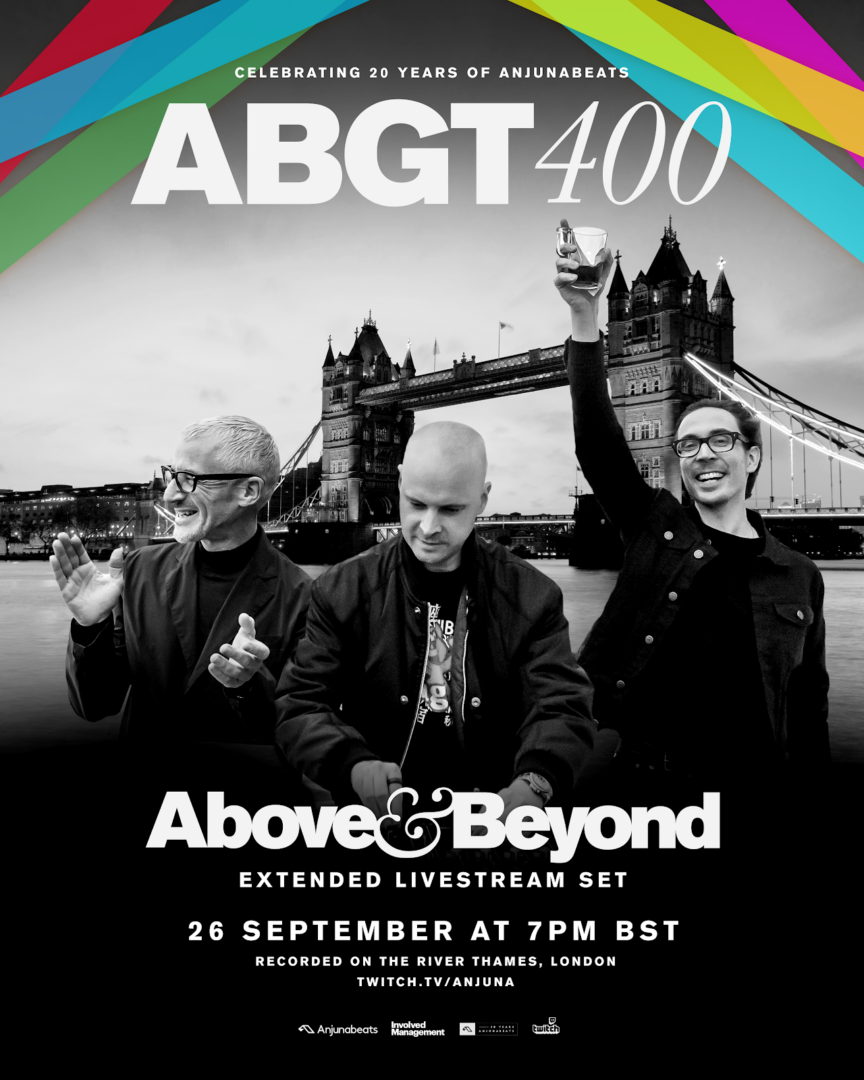 About ’20 Years of Anjunabeats!’

This year marks the 20th anniversary of the band’s formation and that of their record label, Anjunabeats. What a wonderous and joyous occasion that was! During an extended livestream set, the band will showcase music from the past and present of their imprint, which has introduced the world to artists like Mat Zo, Arty, Audien, Seven Lions, and Lane 8.  Are you drooling yet??

It’s very strange approaching ABGT400 without the usual late nights in the studio together finishing off tracks we’ve been working on over the summer. We just haven’t been able to do that this year. ABGT400 will be the first time we’ve got together since March – that’s the longest time we’ve been apart in 20 years. Jono’s been working on a film score, Paavo’s been tinkering away at his beautiful lakeside studio in Finland, and Tony’s been on a deep odyssey, discovering the joys of livestreaming. As Paavo put it, the world is taking a deep breath, reflecting on how we’ve got to where we are. So, in keeping with that theme, that’s what this year’s Group Therapy celebrations are all about: looking back at the music that brought our family together. Happy birthday Anjunabeats! – Above & Beyond

Fans will be able to chat with Above & Beyond and their family of Anjunabeats artists during the broadcast on Anjuna’s Official Twitch channel and Discord server Fans can be part of the stream using the hashtag #ABGT400 or #Anjunabeats20.
Exclusive commemorative items, including a very limited run of signed merchandise, will go on sale during the livestream.
Above & Beyond’s weekly radio show, Group Therapy, has a cult following around the globe, reaching millions of dance music lovers every Friday through FM and satellite radio, social media and streaming. Previous milestone events have been celebrated with live broadcasts from sold-out arenas in NYC, Sydney, Amsterdam, London, Washington State (USA), Hong Kong, Prague, and Bangalore.
Discover Above & Beyond’s sounds of 2020 and get some hints as to what you’ll be hearing during ABGT400 by following their ‘Played By Above & Beyond’ playlist
Saturday, September 26 at 7pm BST on twitch.tv/anjuna
Recorded on the River Thames in the band’s hometown of London
The show will feature an extended Above & Beyond set
full Anjunabeats hits from the archive
Watch the announcement video and RSVP to the livestream
CONNECT WITH ABOVE & BEYOND
Facebook
Instagram
Twitter
Spotify
Posted in Festivals and tagged Above & Beyond, Above and Beyond, anjunabeats, anjunadeep, Arty, Audien, Lane 8, mat zo, new music, New Release, news, Press Release, seven lions
← Dosem Releases ‘Megacities’ Off Dream DecoderAnjunadeep Presents Reflections Vol. 1 →
Don’t forget to follow The Festival Voice for all of your electronic music and festival news!
Instagram: @TheFestivalVoice
Facebook: @TheFestivalVoice
Twitter: @thefestvoice
Snapchat: @thefestvoice
YouTube: TheFestivalVoice