International Music Summit (IMS) is the leading voice for business, culture and education in electronic music. During the 3 day, 13th installment of the summit, they will unite the most influential industry figures  through conversation, connection and celebration. IMS Ibiza will bring artists, visionary thinkers and industry leaders to the center of powerful discussions. Making a meaningful difference and being a catalyst for change is the point of these discussions.

Iconic electronic musician, producer, visual artist, academic and environmental activist Brian Eno will be at the forefront of debate. Brian will open IMS Ibiza with an interview with IMS partner BBC Radio 1 DJ Pete Tong. He will speak about the environmental crisis the world is facing and will introduce the project as a founding trustee of EarthPercent.

This important interview will take place via video call. It is one part of focus at IMS Ibiza on the climate emergency. The interview will follow into other presentations and initiatives. These presentations examine the debate around the issue and what action must be taken. IMS will donate the cost of Eno’s flight to EarthPercent. They will also carbon offset all air travel associated with producing the 2020 event.

EarthPercent encourages artists and music companies to commit a small percentage of \revenue to organisations addressing the climate emergency. As an industry with huge cultural influence we should be taking a leading position in being conscientious and pro-active by supporting those organisations in line with that goal. The aim of EarthPercent is to establish an effective way for the music industry to be part of a solution by generating income via a rolling and continual mechanism,

“There’s a revolution going on: the biggest and broadest social movement in human history. It grows out of two realisations: that the planet – and with it human civilisation – is in danger of collapse from a rapidly changing climate. And that it’s us – us people – who have to do something about it. The music industry has always been a leader in movements for social change, and we can be proud of that. But if ever our efforts were needed, now is the time. This is The Big One and I am delighted to have this opportunity with IMS to speak with the global electronic music community at such a critical moment.” Brian Eno

Brian Eno was a founder member of Roxy Music. Brian has worked with some of the most creative artists of our time including works with Talking Heads, U2 and Coldplay. He has also produced a discography of highly influential solo albums. Working with the likes of David Bowie, David Byrne, Grace Jones, Karl Hyde and James Blake as well as many others, his collaborations deeply interweave pop culture. He coined the term “ambient music” and recorded the album “Ambient 1: Music for Airports”.

International Music Summit is an educational, inspirational and motivational thought leadership platform. IMS is dedicated to creating and encouraging the awareness of, and appreciation for, electronic music, and related art forms. They do this through the presentation of summits and events that celebrate both the ongoing and historic contribution of the genre to culture worldwide. IMS annually hosts major events globally in Ibiza, Los Angeles, China and Malta. IMS was created by Ben Turner, Danny Whittle, Mark Netto, Pete Tong & Simeon Friend. 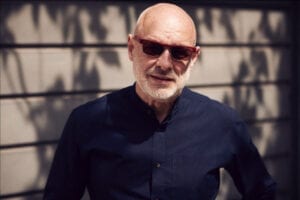