Ready to take part in a once in a lifetime event? Well, get ready, because BUKU Music + Art Project, New Orleans’s premier multi-faceted boutique music festival, announced the lineup for BUKU: Planet B! This will be a one-time-only fall iteration of its flagship spring event. Planet B offers up an alternative way to dance through the rabbit-hole of BUKU on the banks of the Big Easy. The goal is to celebrate the resiliency of New Orleans and the triumphant return of live music. As a result, BUKU: Planet B is purposefully boutique in size but captures the expansive multi-genre curatorial ethos of BUKU, welcoming over 50 acts to its creative playground on October 22-23, 2021.

For the past decade, BUKU has fostered a boutique festival experience. The festival proudly reflects the diverse and progressive subculture of New Orleans. It’s birthed the #BUKREWE, a community of festival lovers, carnival kings and queens, ragers and twerkers, that come in all shapes and sizes. All of these groups flow together along the banks of the Mississippi. Those in the know can attest to the wild costumes, unhinged self-expression, and myriad of personalities that set the BUKU vibe from start to finish and have made it one of North America’s most authentic places to party. 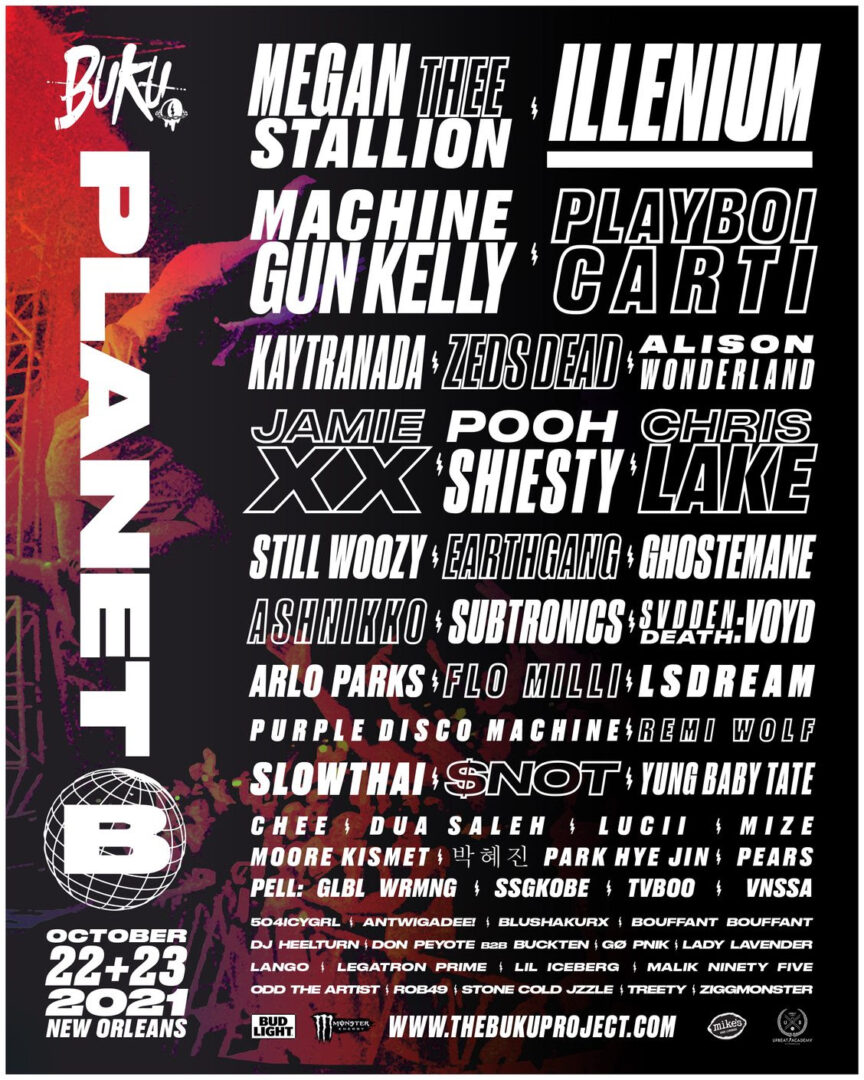 As you would expect in New Orleans, dancing takes center stage at Planet B with the cutting-edge eclecticism of producers Kaytranada and Jamie xx. In addition, you’ll find crazy names such as Australian dance music producer and vocalist Alison Wonderland, and the trio of bass titans Zeds Dead, Subtronics, and SVDDEN DEATH: VOYD. Adding to the diverse vibe, Chris Lake and Purple Disco Machine will also treat the #BUKREWE to their discography of genre-defining house heaters.

As a barometer for the sounds taking over tomorrow, BUKU: Planet B welcomes breakout stars like Remi Wolf, Dua Saleh, Moore Kismet, VNSSA,박혜진 Park Hye Jin,TVBOO, and others. Plus over 20 local New Orleans acts will be shared. This is in an effort to showcase and support the local arts community, including the first festival performance by Pell’s GLBL WRMNG collective.

“For the past year, we’ve watched our fans step outside of their comfort zones and persevere through weird times,” said Dante DiPasquale, BUKU’s co-creator. “PLANET B is the result of us being inspired by them to do the same, and all of us at Team BUKU are excited to finally party with them again.”

This festival is one of a kind! It is set against the uniquely New Orleans backdrop of the hunting Market Street Power Plant and the historic grounds of the old TwiRoPa venue. Planet B aims to harness the chaos of the last year and release it in the form of raw creativity. We all need that creative outlet right now, that is for sure! Attendees will be guided between multiple stage environments, a dizzying landscape of art installations, street-artist performances, and a multitude of surprises. In addition, fans may find themselves mesmerized by a local graffiti artist, enhancing their costume with a custom face painting, joining a marching band procession, catching a pop-up breakdancing crew, or just hanging with friends while gazing at the New Orleans skyline. It’s an urban oasis as much about oddities and community as it is about the headliners.

Civic duty also remains at the heart of the BUKU spirit. For instance, the event organizers continue their Social Responsibility Commitment to fostering a diverse and inclusive environment geared towards social justice, reducing the environmental impact of the event, and supporting New Orleans community organizations. In 2020, BUKU doubled down on this commitment alongside its charitable partner Upbeat Academy by launching their Take Action Project (“TAP”). Thus far, the project has completed three fan-mobilizing campaigns raising over $10,000 for racial justice, voting rights, and environmental sustainability organizations. BUKU will continue this mission in 2021 alongside Upbeat Academy, a non-profit that inspires and empowers New Orleans youth through music education, who also act as the beneficiary of proceeds from every ticket sold to BUKU or Planet B. Learn more about these programs: https://www.thebukuproject.com/community

BUKU: Planet B will be the ultimate release for music fans in dire need of connection and creative exploration. It will continue to provide an inclusive home for the technicolor characters that call New Orleans home while welcoming #BUKREWE far and wide to experience the city’s eccentric culture for themselves. Come and get it.

Register for Presale Now for Access to Lowest-Priced Tickets
www.thebukuproject.com