When you think of music festivals in Austin, TX, your mind automatically thinks of Austin City Limits or South by Southwest, right? Well, there may be a new festival that will automatically come to mind, now. I’m talking about Camp Nowhere. Camp Nowhere had its debut this July in Houston, Dallas, and Austin, and I had the pleasure of attending in Austin. Austin is known for its amazing food, so it was fitting that the venue was behind a barbecue restaurant, Stubbs. 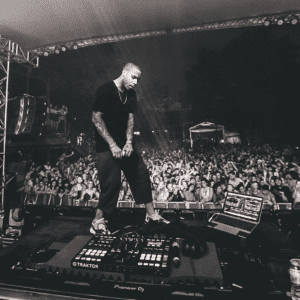 When I entered the venue it was unlike any other venue I had been to thus far. It looked like a shrunken festival ground with bars and lit up trees along the sides of the dirt incline. At the very front was your average sized stage and various and sundry cactus statues. On the lineup were CRAY, R. Lum. R, TroyBoi, Big Wild, and Louis the Child. Since the venue is quite near the University of Texas – Austin campus, the crowd was on the younger side, and that was quite noticeable. While I was excited for the show to start, part of me was apprehensive about the age of the crowd. Fortunately, I did not witness a lot of behavior that would make me think I was surrounded by a younger, college-aged crowd. 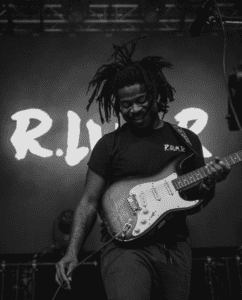 Despite the heat and humidity combination, even at 6:00 PM, everyone was excited for the show to start. CRAY and R. Lum. R were two names I had never heard of, but boy did they bring it. Both of them had the crowd ready for TroyBoi, Big Wild, and Louis the Child. Watching all three artists, one after another, was an amazing experience. But nothing compared to how amped the crowd was. Despite being one of the sweatiest crowds I’ve ever been a part of, people, for the most part, seemed to be hyped to be dripping, dancing, and getting down with hundreds of their closest friends. For some customers, though, the venue did not meet their expectations; if you were in the very back, the soundboard blocked some of the visuals. 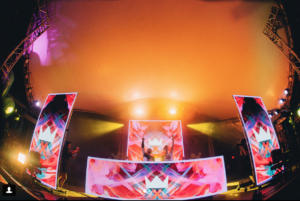 Additionally, the crowd area was, basically, a giant rectangle that went straight back, and up a bumpy incline. While you couldn’t necessarily see very well in the back, the sound carried phenomenally. Plus, if you happened to end up in the back, you had easy access to the very affordable beverages. Those festival-goers who gave feedback said, despite some of their dislikes of the venue, the artists, especially Big Wild, made up for it “a million times over. 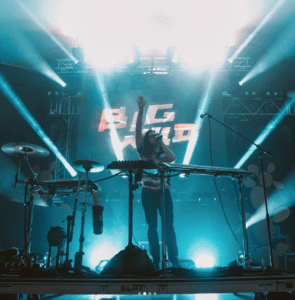 After the show was over, I had the privilege to catch up with Jackson Stell, AKA Big Wild, his tour manager Chris Leckrone, and his visual director Dan Sanford. After a couple of drinks and some chit-chat, we decided to venture out to get a snack. If you are ever in Austin and are up around 3 or 4 in the morning, definitely give 24Diner on Lamar Boulevard a chance. The chicken and waffles did not disappoint, and neither did the maple milkshake! Overall, the heat, humidity, and bumpy ground did not deter me or my friends from wanting to go back to Camp Nowhere, and I hope to see this festival grow and improve over the coming years!