We all love festivals but this one is pretty cool because it is a non-profit festival! M3F is North America’s most celebrated non-profit music festival. As of just now, they have announced the 2022 lineup and released tickets for their highly-anticipated return to Margaret T. Hance Park in downtown Phoenix, Arizona. The festival itself is taking place from March 4-5, 2022. The non-profit aspect is pretty cool! Since 2004, the festival has donated $3.2 million to charity, including $1.1 million donated in just the last two years alone. 100% of proceeds from M3F are donated to charity, which is the primary focus for the festival.

This festival is entirely unique and is an outlier in the for-profit world. M3F was originally spawned as a team-building exercise for its producers, WESPAC Construction. However, now the festival acts as a philanthropic flagship for the City of Phoenix and a national invite for fans looking for a feel-good edition to their yearly music calendar. Since the event’s inception, the non-profit has donated over $3.2 million to various causes, with over $1.1 million in donations coming from the previous two years alone. Awesome! You can get behind that cause!

For their 2022 lineup, M3F will be bringing artists from a diverse range of genres. 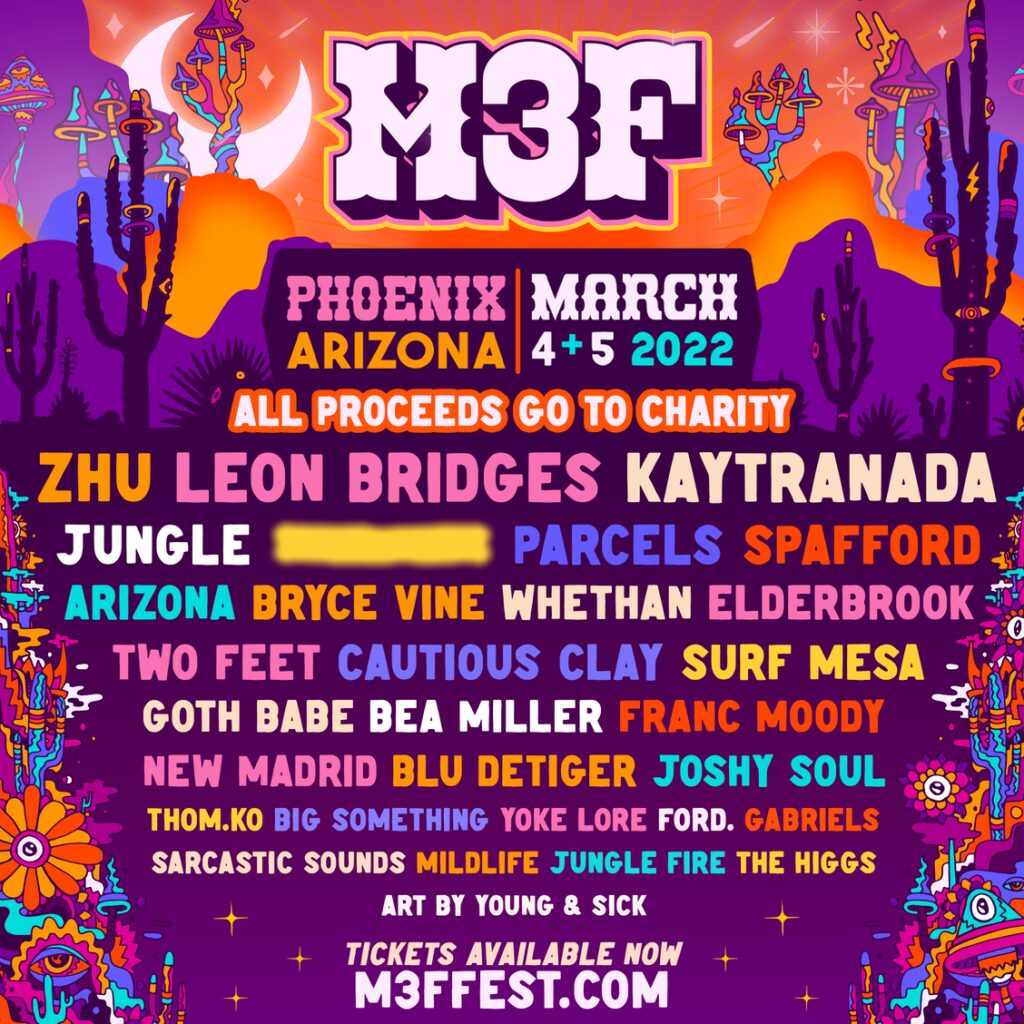 We love a sustainable festival! It is great to see that over 80% of its waste is being recycled, onwards to its amazing food and beverage curation, art installations, and much more. Additional details on immersive programming are to be announced soon.

The team has been up to great things the past few years. Just before the world shut down in March 2020, M3F raised $600,000 for beneficiaries including the Music Therapy Program at Phoenix Children’s Hospital, the Northern Arizona Chapter of Habitat for Humanity, the Leukemia & Lymphoma Society, and Teach for America. Like everyone else, they were forced to take a year off in 2021. As a result, M3F offered to return the funds raised to its donors but was honored to hear that these benefactors trusted the organization’s charitable vision in the face of national shutdowns. It was in the absence of the event, 18 years into building the organization, that M3F has risen to its position as a high-impact non-profit group that just happens to produce a burgeoning festival in its own backyard.

With the help of its dedicated partners, sponsors, and charities, the event has quietly and authentically stood as a guiding beacon for what can happen when the cultural influence of music, art, food, and immersive experiences are used for the betterment of society at large.

Community. Culture. Charity. This is M3F.

Tickets for M3F are now on sale and can be purchased through their official website.