Some of you have been fans of Nelly since the good old days. The man, the legend, Nelly, multi-platinum, three-time Grammy-winning artist, and four-time AMA award-winning entertainer has now announced his Fall Concert Series. This is a first-of-its-kind experience showcasing the on-stage fusion of country, hip hop, rap, and R&B with a distinctly “rock n’ roll” presentation. Heck yes! You won’t be able to get enough of the full live band as well as the multi-million dollar package. You can expect tons of rising stars for one unforgettable show. Leading dance music promoter, Relentless Beats has partnered with RNC Entertainment to bring Nelly’s Lil Bit of Music Series to Rawhide Event Center in Chandler, AZ, on October 15th. 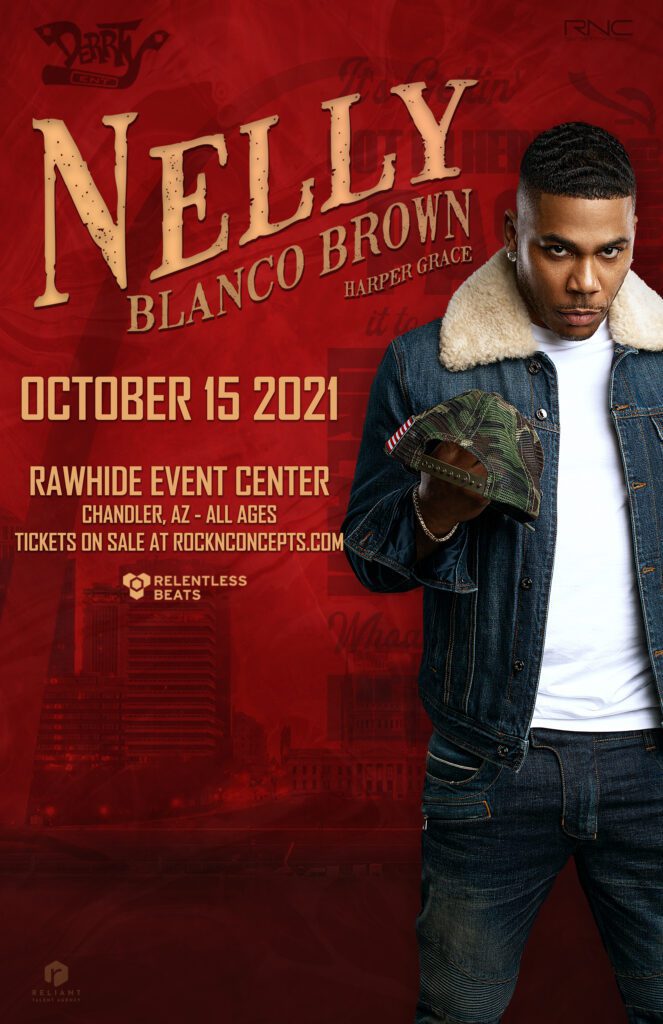 We’ve gotta celebrate 20 years in style! This unique production stems from the celebration of Nelly’s 20-year anniversary of the RIAA certified Diamond record “Country Grammar” earlier this year. Fans were blessed with the digital release of a LIVE, full band production of the complete album, not to mention his continued commercial success in country music. If you’re a Nelly fan, you won’t be able to get enough of this! So whether fans are attending to party with the classics or bask in his most recent hits like Cool Again with Kane Brown, Good Times Roll with Jimmie Allen, and Lil Bit with Florida Georgia Line; Nelly is ready to shake up the live music scene with this show that is sure to have a little something for everybody.

Nelly will hit the road just in time to celebrate the release of “Heartland.”

This country-inspired EP that he likes to call a collection of “country club-bangers.” His lead single “Lil Bit” from the project continues to make significant waves in the country space as it is his 3rd collaboration with the multi-platinum duo Florida Georgia Line.

The first of three of these Lil Bit of Music Series will feature Nelly and Blanco Brown. You can expect an amazing show here- and there are over a dozen dates in October to choose from! Blanco has teamed up with Nelly as one of the pioneers of hip hop and country fusion. The Atlanta-born, platinum-selling artist and creative visionary known for his #1 hit singles “The Git Up” and “Just the way” with the band Parmalee has coined his unique sound as “Trailer Trap.” Brown brings soul and sincere and playful energy to the stage, along with an underlying message (as titled in his most recent single ) – “Nobody’s More Country” than anyone else.
This collection blends together people from all walks of life. Some people can appreciate multiple genres. Nelly and Blanco are here to give them this blend! From Nelly’s initial success in 2004 with Tim McGraw in “Over and Over’ to the remix of Kane Brown’s “Cool Again” just last year, he continues to prove that music transcends all boundaries and genres, insisting, “No matter what you listen to, everyone likes to party, and to celebrate the same way.”
Tickets are on-sale now, and can be purchased at www.relentlessbeats.com. This show will begin at 7 p.m. PT. Nelly’s Lil Bit of Music Series is all-ages.
Visit www.relentlessbeats.com for the most up-to-date information on the Arizona date of Nelly’s Lil Bit of Music Series and all Relentless Beats events. Stay connected on Instagram and Twitter at @RelentlessBeats and Facebook at www.facebook.com/relentlessbeats.
Posted in Festivals and tagged Blanco Brown, Florida Georgia Line, Kane Brown, Nelly, Parmalee, relentless beats, Tim McGraw
← Wild Heaven Beer Launches New Venue and Shows!Enjoy Your Departure to Playa Del Carmen →
Don’t forget to follow The Festival Voice for all of your electronic music and festival news!
Instagram: @TheFestivalVoice
Facebook: @TheFestivalVoice
Twitter: @thefestvoice
Snapchat: @thefestvoice
YouTube: TheFestivalVoice