The past 20 years have been good for Oregon with the amazing Northwest String Summit. Each and every year, this festival has brought droves of fans to Horning’s Hideout in North Plains, Oregon. This is only a short, thirty-minute drive northwest from Portland which leads to a long weekend of world-class musicianship and decade-spanning friendships in the most idyllic Pacific Northwest summer setting. The festival has been working its tail off to provide attendees with the best of the best and as a result, festival organizers announced a hefty addition to Sting Summit’s already-stacked lineup for the festival’s 20th-anniversary event over July 21-24. There are already some great headliners in there such as Umphrey’s McGee, Yonder Mountain String Band, and Greensky Bluegrass. Now, Joe Russo’s Almost Dead will bring their beloved reimaginings of the Dead’s vast catalog and beyond to String Summit’s main stage. Keller Williams will bring along his Compadres (previous Compadres include members of String Cheese Incident, Leftover Salmon, and Elephant Revival), Sierra Hull will bring her mighty mandolin prowess back to Horning’s Hideout, and the artistic cross-pollination of Ghost Light will be on full display. Full lists of additions and previously-announced performers can be found below. This is going to be one groovy event! 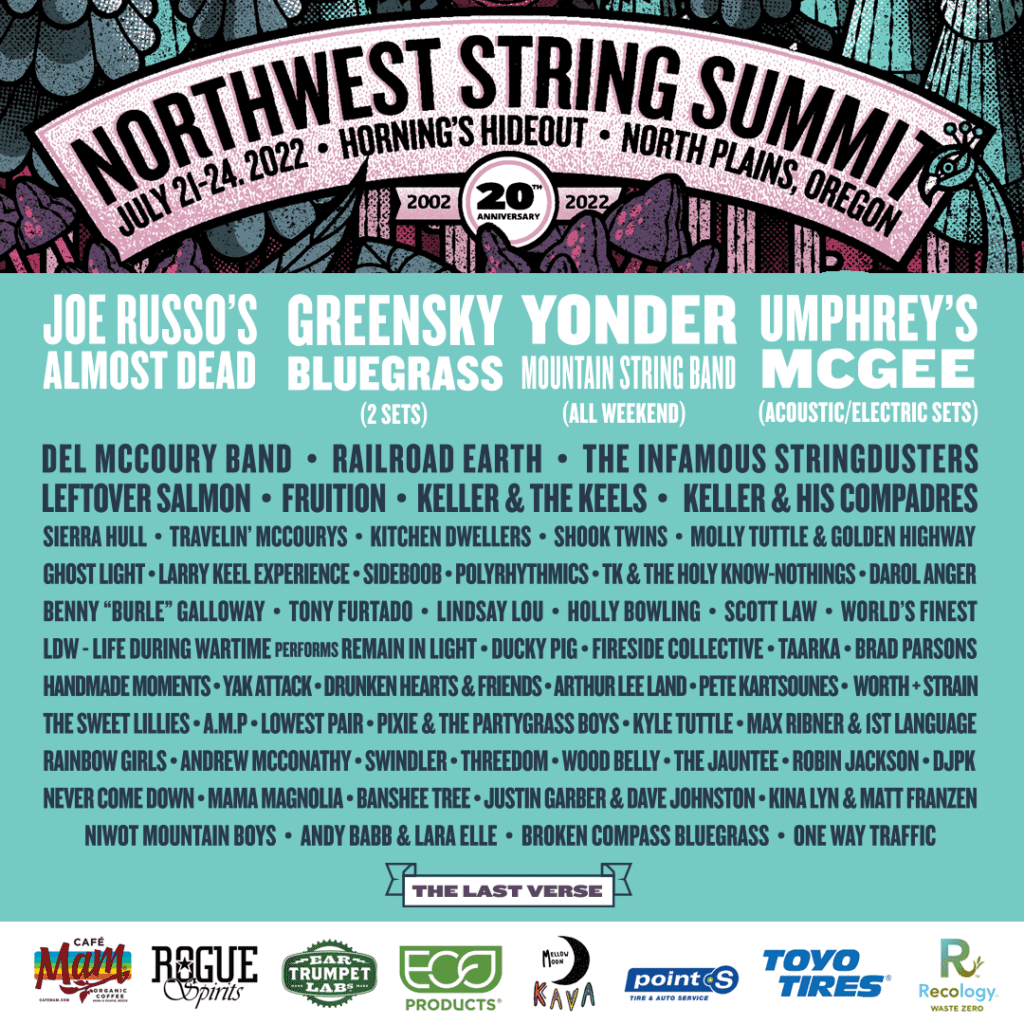 Tickets for Northwest String Summit 2022 are now on sale including Expedition Glamping campsites designed to accommodate 2 adults in total comfort in a canvas glamping tent with a queen bed, mattress, linens, and pillows along with all the comforts of home; nightstand, table, chairs, rug, coat rack, and more. That sounds like a dream come true! This still allows you to get the camping experience but without all the stress! 4-day passes, parking & RV passes, basecamp camping, and Expedition glamping packages are available for purchase here. Ticketless fans are encouraged to act quickly as Tier 4 General Admission tickets are the final tier, and once they’re gone, they’re gone.  You don’t want to miss out on this one!

The entire announcement of artist additions for String Summit 2022 includes

With the announcement of String Summit’s 20th-anniversary lineup, festival organizers shared an open letter to longtime patrons letting them know that this year’s event will be the festival’s last—billed as String Summit Presents: “The Final Verse.” “These past couple years have taught us to simplify, to return to roots, and to hold on tight to our loved ones and the friendships we’ve made. To appreciate all that we have, who we are, and celebrate our roots and lives while we can,” the letter reads. “But equally important is to embrace change as an opportunity for progress!” For two decades, Northwest String Summit has cultivated a first-class boutique festival experience with an intimate, neighborly atmosphere, bringing the highest level of talent and musicianship to the most idyllic setting. And while it’s uncertain what the future holds for Northwest String Summit’s beloved team, they promise to make this last hurrah one for the record books. “So, here we are creating this last chapter of the Strummit adventure together,” the letter concludes. “Let’s make it a finale for the ages! We intend to make this last Strummit special on so many levels and we hope you will join us in commemorating our history.”