Ready to close out the season? Sounds crazy to think about, but October is right around the corner! While we aren’t ready to close the season yet, we have to think ahead! As Ibiza is added to the safe travel list, Amnesia continues to announce its much anticipated season in reverse. Next up is Pyramid’s sure-to-be historic 2021 closing party on Sunday, October 10th. This always legendary event will be headlined on the Terraza by firm favorites Ricardo Villalobos & Luciano, KiNK (live), Mar-T, and in the Club by Nina Kraviz, Dax J, Anetha, and Luca Donzelli. Talk about an amazing lineup! Despite the current pandemic, Amnesia has worked hard to pull together two rooms of the world’s most elite DJing stars. This Pyramid closing party is proof of that, but there is much more to come in August, September, and October. Don’t worry, festy season isn’t over yet! 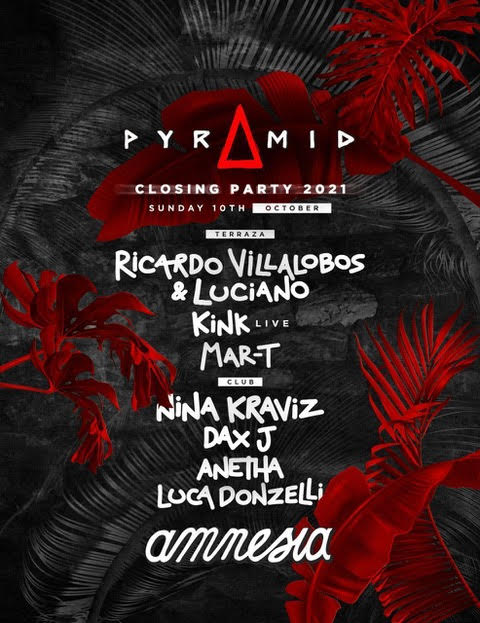 In just a few short years, Pyramid has shaken up the Ibiza landscape.

Monday nights used to be the name of the game, but they recently changed to Sundays. However, due to the pandemic, not all of these events came to fruition. Pyramid has focused on the music and brought the island back to its glory days. You can dance until the sun comes up. Everyone knows that the night is synonymous with globally acclaimed DJs, mind-blowing production, sensory explosion, organic materials, and immersive audiovisuals. The closing show is truly going to be a celebration like no other.

Fittingly, then, the world’s most iconic DJs will headline the famous Terraza.

Ricardo Villalobos and Luciano have already sold out their show at Cova Santa, and are official Pyramid ambassadors. The duo will play some of our favorites and show us their dexterous DJ skills that have earned them a top spot in our hearts. They’ll also be joined by Bulgarian live wizard KiNK. He’ll be cooking up some electrifying techno and creating a spectacle that cannot be missed. Lastly comes Mar-T, the long-time Amnesia resident, a DJ who knows the club’s crowds and sounds inside out, and who never fails to amaze.
In the Club is new school techno queen Nina Kraviz. You’ll recognize that name! The DJ, producer, and Trip label boss has innovated the techno world in recent years and can do anything from deep, pulsing, acid-laced rollers to raved-up sounds that leave the dance floor in awe. You’ll also be awed by Dax J. He is a London-born, Berlin-based artist who is the quintessential DJ in every sense. He has this amazing talent to produce individual and famously raw techno that blows your mind. Then there’s Anetha, a Parisian techno boss who has risen quickly to the top. Lastly, Italian Luca Donzell will light up the night with his storytelling music.
The Pyramid closing party is one of the real must-attend events in Ibiza. After the 18 months everyone has had, this one is set to be even more special than ever before.
Tickets:
https://www.festicket.com/festivals/amnesia-ibiza-pyramid-10th-october/2021/shop/
Socials: