Shaky Knees is Ready to Rock Out

Shaky Knees is back! Like everybody else, this iconic Atlanta, GA rock festival took a break in 2020, but they’re giving us the goods for their grand return in 2021. The festival boasts over 60 artists from huge headlining names to rising stars from local areas. This year’s line-up features such names as Stevie Nicks, Run the Jewels, and woah… The Strokes! 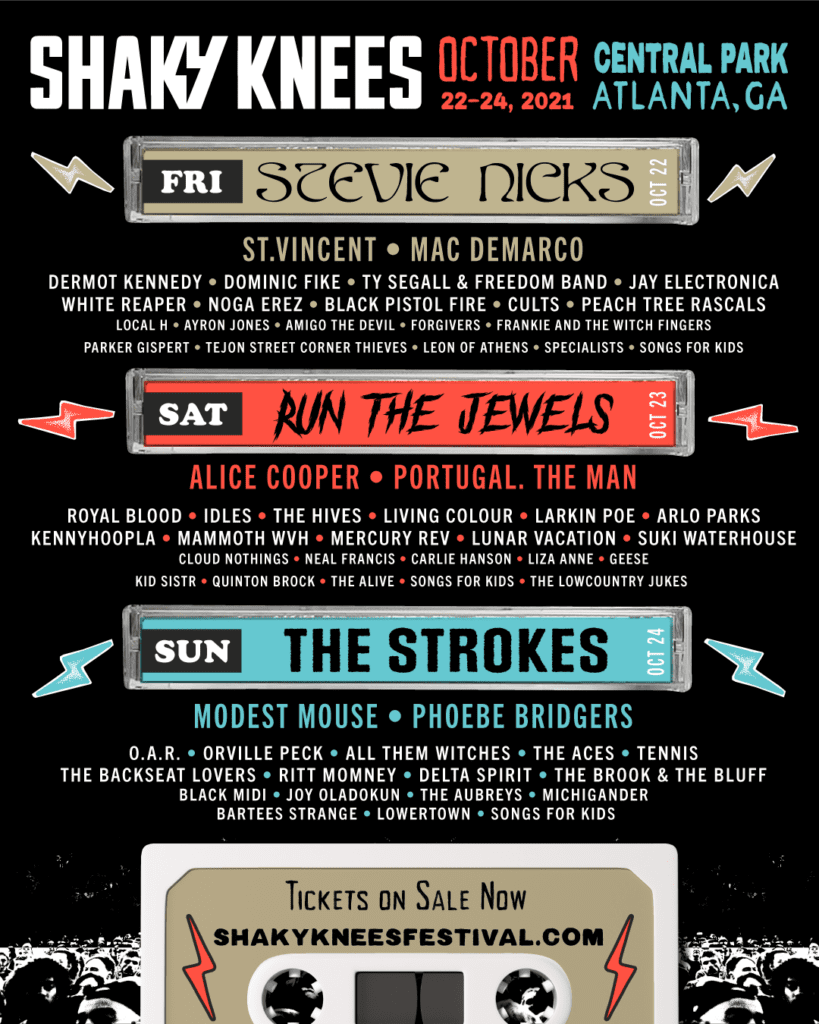 Shaky Knees is a staple of Southern festival-going. Hosted in downtown Atlanta in Fourth Ward West’s Central Park, Shaky Knees has been putting on shows since 2013. The success of the rock festival quickly spawned a country music event in 2015, Shaky Boots. Even more recently established is Shaky Beats, an EDM version of the festival that began a year later in 2016.

Usually hosted in May, the festival has been pushed back slightly and will now commence on October 22 and is a 3-day festival, though 1-day passes are available. Some particularly special performers jump out among the line-up. Especially exciting is the appearance of St. Vincent, who hopefully will be performing from her most recent album, Daddy’s Home. Other exciting appearances include Cults, IDLES, Arlo Parks, Orville Peck, Tennis and so many more.

During lockdown, it almost felt like the rock scene had dried up as concert venues struggled to stay afloat. The return of Shaky Knees will be a boon for rockers everywhere and will bring in a fresh tide of headbanging and knee-shaking to the masses. These artists have been locked away as long as we have, no doubt creating exciting new work to share with us as soon as they take the stage. I, for one, can’t wait.

Posted in Festivals and tagged Alice Cooper, Georgia, Mac Demarco, Modest Mouse, Phoebe Bridgers, Portugal. The Man., Run The Jewels, Shaky Knees, St. Vincent, Stevie Nicks, The Strokes
← Magic in The Sky is Giving Back 10% of Ticket Sales!!!The Full Lineup of Magic in The Sky is Out! →
Don’t forget to follow The Festival Voice for all of your electronic music and festival news!
Instagram: @TheFestivalVoice
Facebook: @TheFestivalVoice
Twitter: @thefestvoice
Snapchat: @thefestvoice
YouTube: TheFestivalVoice
Home » Blog » Shaky Knees is Ready to Rock Out!