I went to my first EDC Las Vegas and I am at a complete loss for words. I don’t even know where to start. It’s impossible to describe the insane experience I had and the overwhelming love I felt this past weekend, but I’m going to try.

The story of me full sending to EDC this year is a miracle of its own. I’ve been to over 30 festivals but EDC was never in the cards for me, financially or logistically. After the cancellations of Bonnaroo and Imagine, I knew I had to make up for them somehow. I talked to some of my friends about going to EDCLV but none of them were able to make it happen. I gave up and thought “maybe next year”. Not even a week later I was offered a spot at Camp EDC and given a free wristband for the event ON THE SAME DAY by two different people. It was meant to be! I was a little bit anxious because it also meant I’d be going solo, but I wasn’t about to let that stop me. Going alone to EDC was the best decision of my life because, at a place like that, you are never really alone. 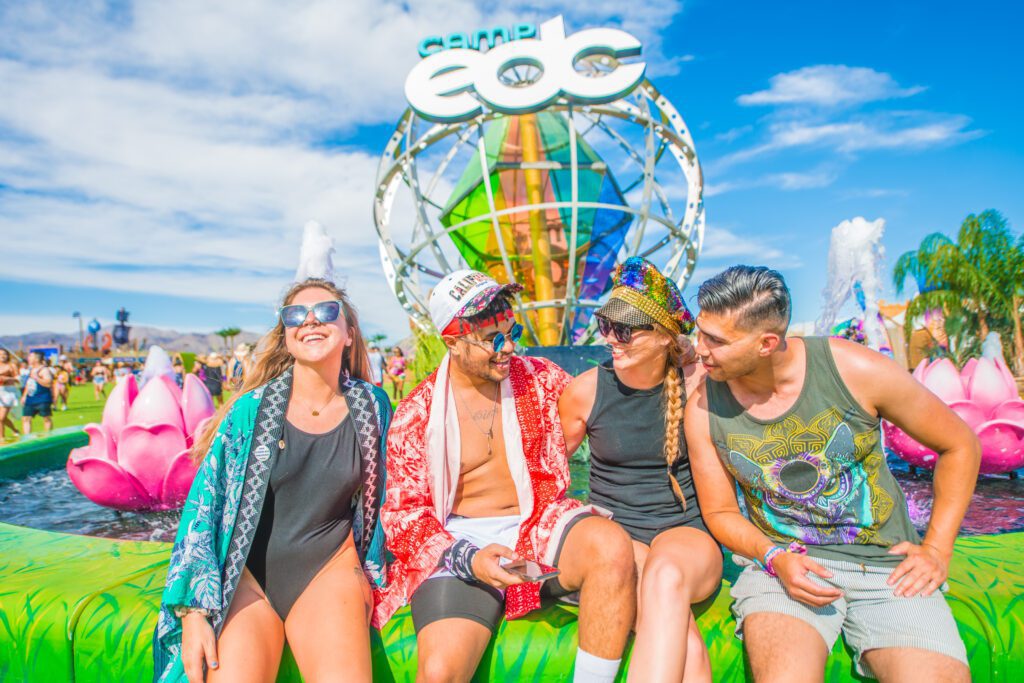 Let’s talk about the people at EDC. The love was flowing and the vibes were high. Everyone was so excited to be back after two and half years and you could feel that contagious energy throughout Las Vegas Motor Speedway. It was definitely that ‘first festival feeling” again. There was this unanimous aura of joyous emotions among people, a feeling of togetherness after two really tough years. I encountered so many beautiful souls. Almost everyone I met felt like family like I had known them forever. The people at EDC expressed kindness to me in a way I’ve never experienced. From the girls who hyped me up when I was taking pictures, the guys who carried my luggage in and out of camp, the strangers that adopted me into their groups, the people that would stop just to tell me how beautiful I looked, the list goes on. I will never forget you guys. Thank you for being a part of my story. 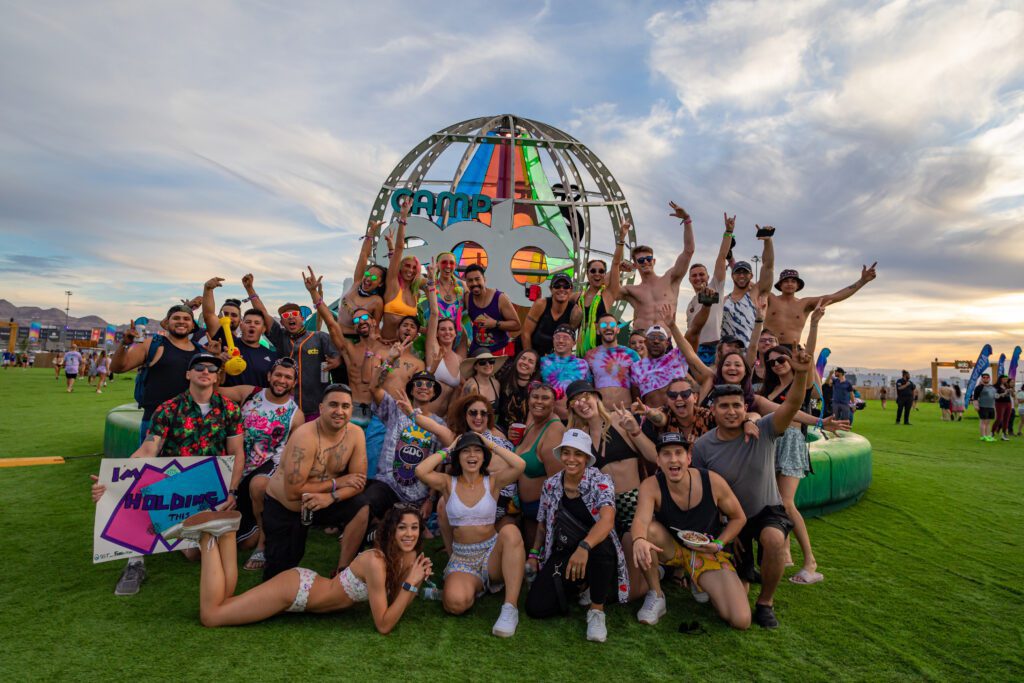 Let’s talk about the production and sets at EDC. All of the artists on the lineup brought the heat, literally (we love pyrotechnics!) and figuratively. A lot of people have asked me who my favorite sets of the weekend were, but it’s so hard to say. I personally loved Louis the Child and Troyboi, they both had incredible performances. Zedd’s intro was a mix of “do it to it” and squid games and the whole crowd (especially me) went crazy for it! I have seen many pictures and videos of the fireworks at EDC but it’s even more insane in person. The drone show leading into the massive display of fireworks blew my mind. I have never seen anything like it in my life. They weren’t kidding when they say “under the electric sky.” It was overwhelmingly magical. The festival hosted 14 stages this year and each one had a vibe of its own. Circuit Grounds was my favorite because it had a plethora of screens surrounding you and the visuals were wild. 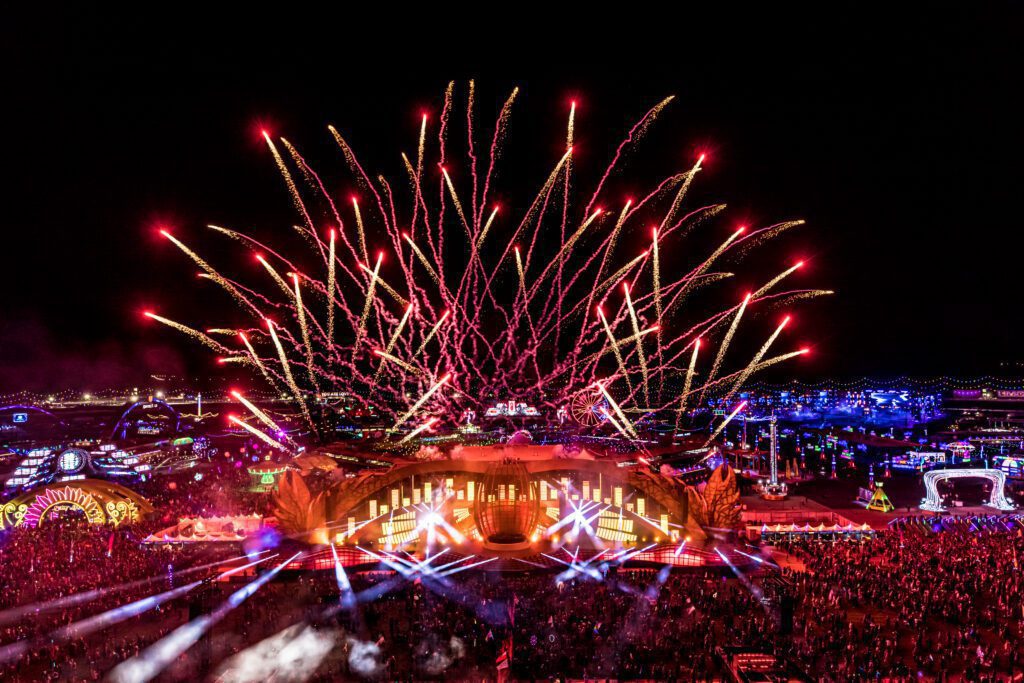 Let’s talk about my experiences at EDC. I just want to say WOW. Insomniac Events executes everything down to the smallest of details. I saw everything from acrobatics to fairies to fire spinning. The characters and performers were an amazing touch to the overall experience. Downtown EDC was super cool. There were drag shows, karaoke, a circus, and even wedding ceremonies. Now I know it’s called “Electric Daisy Carnival” but I had no idea there would be so many carnival rides. Riding the Ferris Wheel is a memory I will always cherish. The view was so beautiful at the top and seeing all the lights brought me to tears because I was just so happy to be in that present moment. Camp EDC was by far the best camping experience I’ve ever had at a festival! Camp had so many free perks including goat yoga, pool parties, shuffling classes, massages, hair braiding, sound baths and so much more. Not to mention FREE showers which are unheard of at festivals. It was a total glamping experience in those shiftpod tents.

I now understand why everyone calls EDCLV “the super bowl of festivals.” This festival changed my life. I feel whole again. It’s been five days since I got home and I can still feel that “high” from the weekend. I learned such a valuable lesson in love as well. The love I shared under the electric sky… is the love I want to continue sharing with the outside world, every single day. That is the power of the community that EDC attracts. I will definitely be back for the 26th year celebration in May 2022 (tickets are already on sale, guys!), and every year after that. Thank you Insomniac Events for an incredible first EDC.