On the eve of its 20th anniversary, Anjunabeats is proud to welcome another trailblazing artist to its ever-growing label family, Justin Blau, a.k.a. 3LAU. ‘Tokyo’ is 3LAU’s first ever track with Anjunabeats. 3LAU has become one of the most recognizable artists in the global dance scene. In addition, 3LAU shares the same indie-spirited nature as label founders Above & Beyond. For example, 3LAU has reworked some of the biggest artists in pop music. Additionally, 3LAU has headlined international festival brands including EDC, Ultra and Electric Zoo. 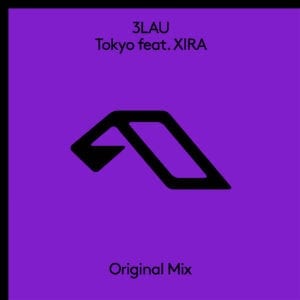 Blume recordings was set up as the first not-for-profit dance record label in 2016. The label released Justin’s debut LP ‘Ultraviolet’ in 2018. His charitable endeavors have raised over £200,000 for causes like Pencils of Promise and cancer research as well as early detection related charities.

3LAU’s Anjunabeats debut ’Tokyo’ has plenty of hallmarks from label classics. For instance, the track features a spirited vocal courtesy of Sydney musician XIRA. Similarly, it is a story of love and longing spanning across the globe and a rolling dance floor energy.

“Over the past 9 years that I’ve been touring, Tokyo has become my favorite city to visit. It somehow manages to balance deep historic culture with futurism, modern architecture, and efficiency,” explains Justin. “I wanted this song to capture the essence of a night in Tokyo, and what it feels like to be both enchanted by and lost in an unfamiliar place. I’m especially excited to be releasing Tokyo on Anjuna, as I’ve been a fan of Above & Beyond and many other Anjuna artists like Lane 8 & Audien for quite some time. This song is definitely the perfect entry point for me to join the Anjuna fam.”

3LAU ’Tokyo’ featuring XIRA is available to download and stream on Anjunabeats now. Finally, Justin will be closing the year with shows in Texas and New Mexico.

Don’t forget to follow The Festival Voice for all of your electronic music and music festival news!

Posted in Festivals and tagged 3LAU, Above & Beyond, Above and Beyond, anjunabeats, Audien, EDC, electric zoo, Lane 8, new music, Press Release, tokyo, Ultra, xira
← You’ll Never Be The Same After These Remixes‘Known You Before’-Jason Ross & Seven Lions →
Don’t forget to follow The Festival Voice for all of your electronic music and festival news!
Instagram: @TheFestivalVoice
Facebook: @TheFestivalVoice
Twitter: @thefestvoice
Snapchat: @thefestvoice
YouTube: TheFestivalVoice
Home » Blog » Travel to ‘Tokyo’ with 3LAU