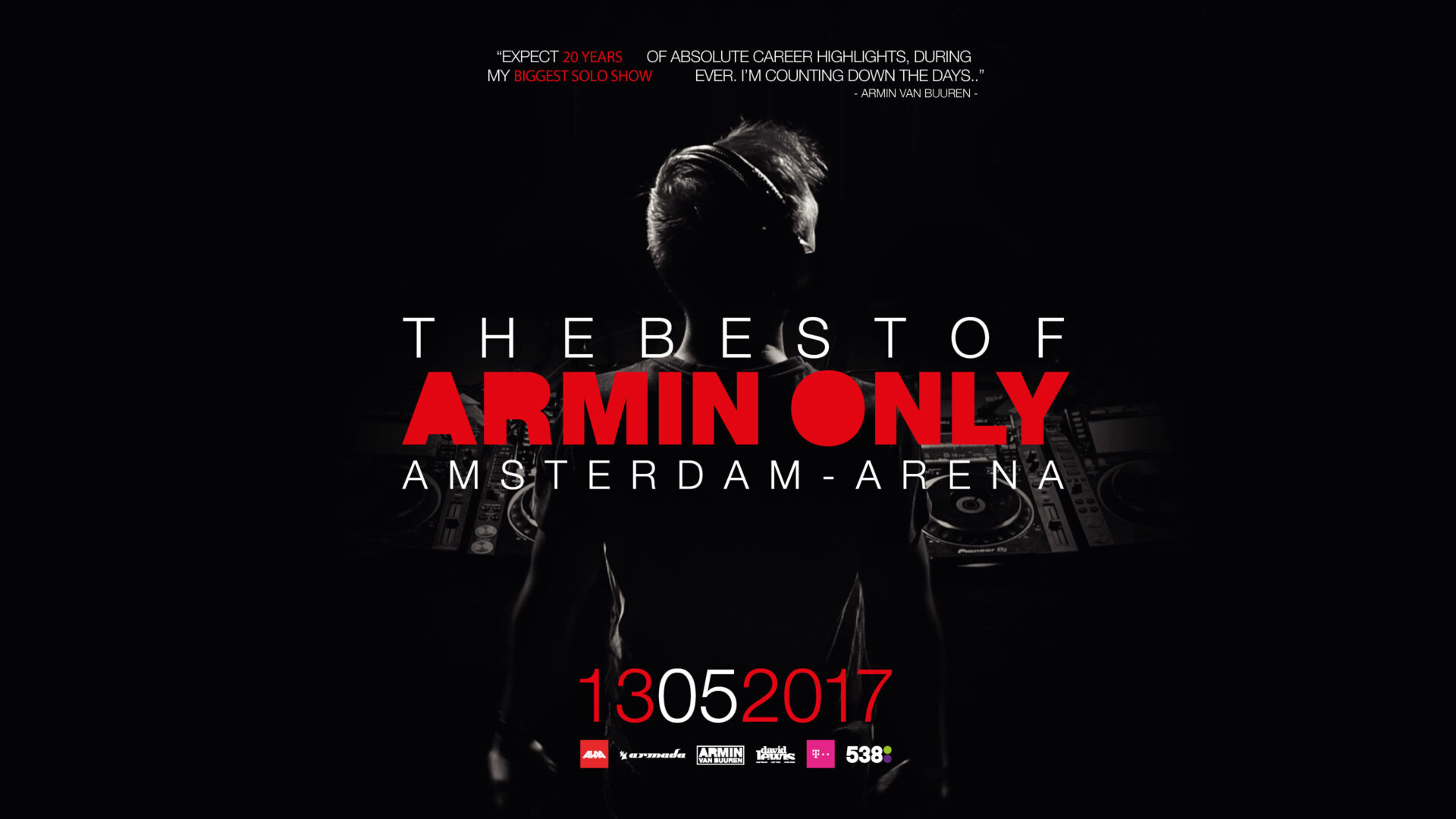 Armin Van Buuren’s The Best of Armin Only 20th-anniversary concert was the premier event in the Netherlands this past Summer 2017. More than 100,000 people from every corner of the globe congregated in Amsterdam to celebrate one of EDM’s greatest musicians in his home country for two epic nights.  Both nights of the concert were set in the iconic Amsterdam Arena, a massive venue that holds 50,000 people. The event showcased Van Buuren’s greatest hits over the course of his legendary 20-year career for his largest audience to date.

Our story begins at 2 a.m. during an eleven-hour bus trip from England to The Netherlands. My cousin and I had decided to travel to Amsterdam to experience the rich culture and nightlife for which the city is famous. Behind us on the bus were two very pepped up English ladies jabbering away excitedly about some concert in the city. My curiosity got the better of me and I turned around and asked WHAT in the world they could possibly be excited about at this hour of the morning. “Armin Van Buuren” they said. I replied… “Who?”. The way they looked at me you would have thought I committed a murder. At this point in time I was not as familiar with the EDM world. They explained to me that Armin Van Buuren is one of the greatest DJ’s in the world and that he was having a show to celebrate his career. I promptly purchased tickets on the popular ticketing app Ticketswap for only 50 Euros – ground floor standing room. When we arrived in the city I exchanged contact information with my new friends, Tina and Donna, and said goodbye for the moment. 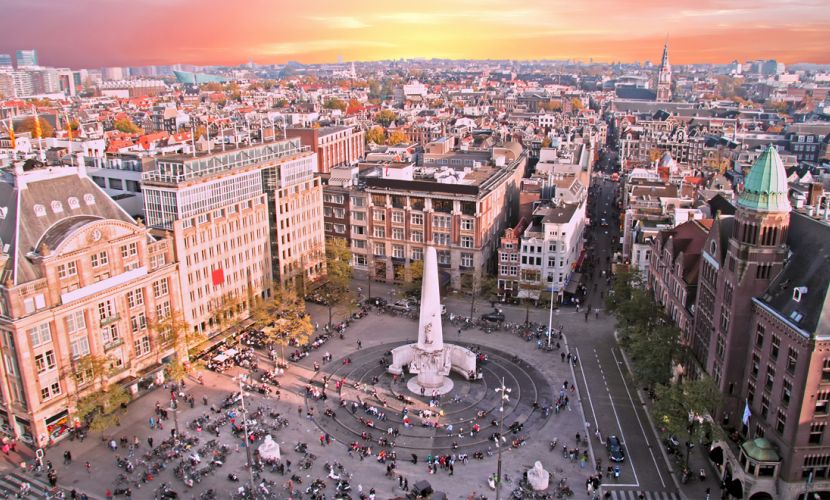 My cousin and I checked into our hostel in Leidseplein Square and we met one of our roommates Bobby; a man from Chicago on a solo Euro trip because his friends bailed last minute. We told him about Armin’s show and convinced him to buy tickets. Our squad was set. The three of us enjoyed our first day in the city (the concert was the next night), met Tina and Donna for some drinks at a bar, and listened as the city cheered to Amsterdam City Football’s victory in their playoff match until the wee hours of the morning. We did some more sightseeing the next day and then finally the big night had arrived. Me, Tom, and Bobby, called an uber and we were off to Amsterdam Arena.

We arrived at Amsterdam Arena an hour prior to show. Droves of people carrying flags and totems representing countries from all over the world poured into the arena gates. I guess I didn’t realize just how big of a deal this event was. We got through security just fine and climbed a massive stairwell into the arena. Amsterdam Arena by itself is an incredibly impressive facility. The outside of the arena was plastered in a monstrous LCD screen while inside was a massive, 50,000 seat stadium topped with a gorgeous glass and steel roof. 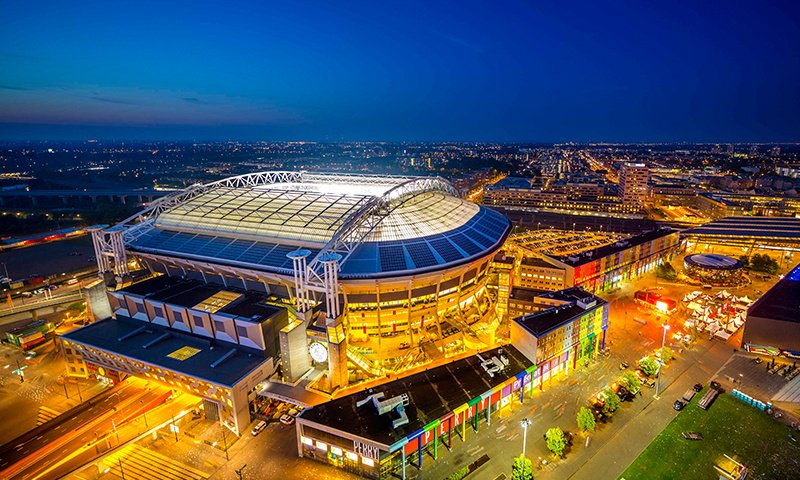 We took to the very center of the stadium, positioning ourselves between the tech booth and the end of the runway stage. The ground floor quickly began to cram with bodies. This crowd was the calm before the store. You could feel the electricity in the air as people were awaiting for what they knew would be the EDM event of the summer. Bobby left to grab a drink and unfortunately we didn’t find him for the rest of the night. The show began and Tom and I were swept onto the dance floor. I was not prepared for the journey I was about to undertake.

“You could feel the electricity in the air as people were awaiting for what they knew would be the EDM event of the summer.”

Armin Van Buuren took to the stage adorned in a brilliant white jumpsuit. The stage lay bare except for the DJ booth and a gargantuan LCD display towering above it.  The stage measurements extended 150 feet across the arena with a runway extending another several hundred feet into the audience. Two large catwalks descended from the ceiling like spaceships, blasting hot ravers with cool streams of nitrogen fog. Sections of the stage disconnected from the ground and hovered above the audience. The show clearly spared no expense, programming over 1 million light cues, 5,000 pyrotechnic cues, and 1200 60” LCD screens into an immersive and enigmatic rave experience of a lifetime. 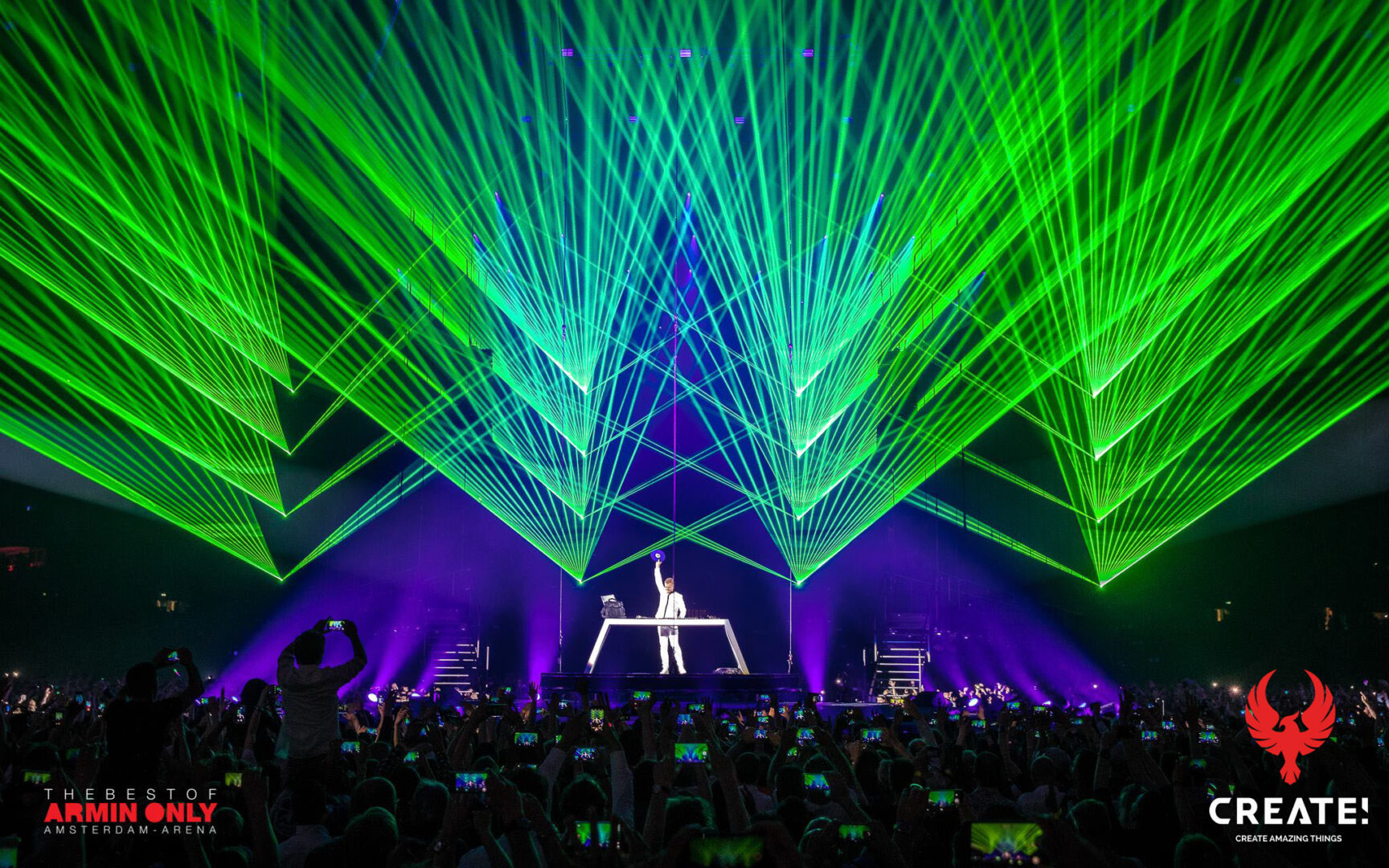 Van Buuren played 4 hours of his most iconic hits, accompanied by world-class musicians, dancers, aerialists, and acrobats. It was a spectacle unlike anything I’ve ever seen. Musicians hung from the ceiling, attached to a fly system, playing horns and trumpets upside down. A diverse dance ensemble of men and women charged fiercely down the runway, dancing with precision and ferocity to Van Buuren’s driving beats. A 20-member drum ensemble extravagantly draped in white marching uniforms paraded across the stage. A team of acrobats flew above the audience, and later performed flips on trampolines hidden behind the stage. 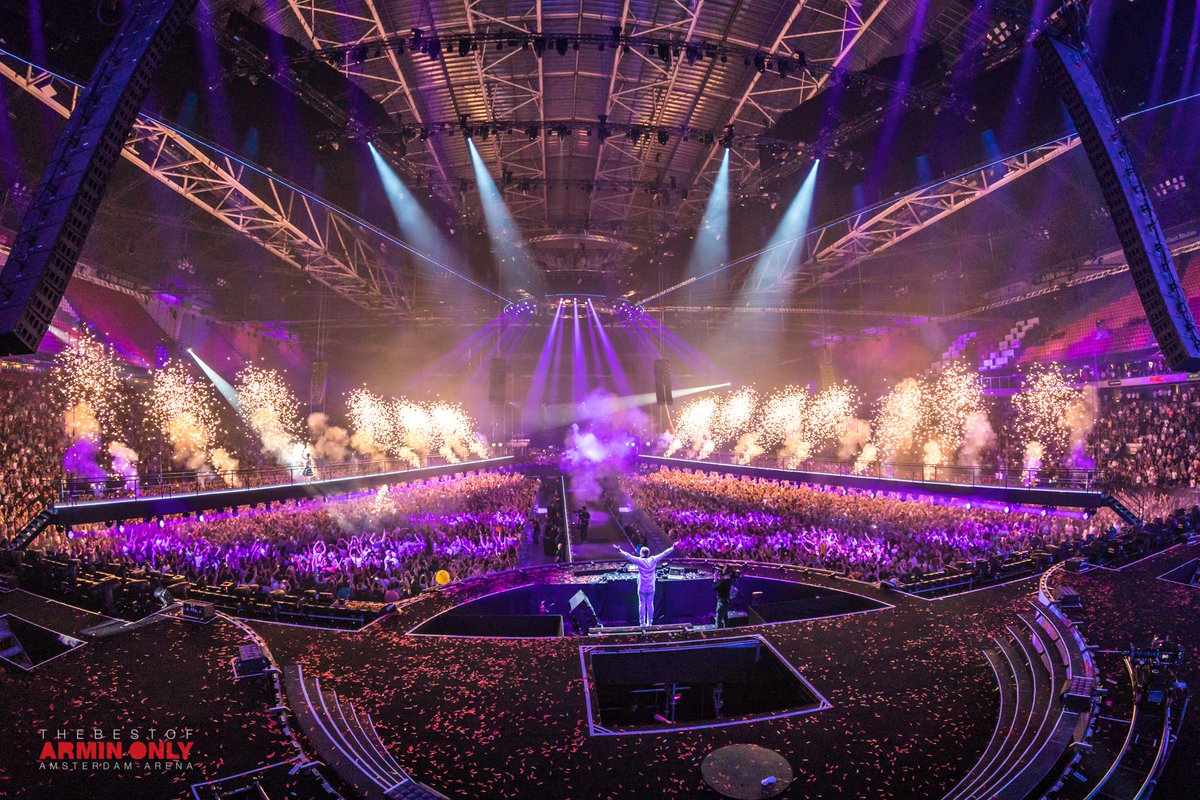 Armin Van Buuren evoked the real magic of the night with his intoxicating energy. I’ve never seen a DJ command the dance floor with such love and enthusiasm. Van Buuren played his classic throw back hits, his favorite chart toppers from his famed A State of Trance radio broadcast, and debuted his newest music for an upcoming world tour. Singers like Trevor Guthrie joined Armin on stage to perform collaborative hits. Armin even brought his brother, Eller Van Buuren, on stage to perform (Eller is a world-class guitarist). The night ended with a brilliant and touching performance dedicated to lives that had been lost the following year followed by one last great rally. Friends and strangers held hands and embraced, sharing their love of music and connection, and danced the last of their hearts out under the glass ceiling of Amsterdam Arena.

“I’ve never seen a DJ command the dance floor with such love and enthusiasm.” 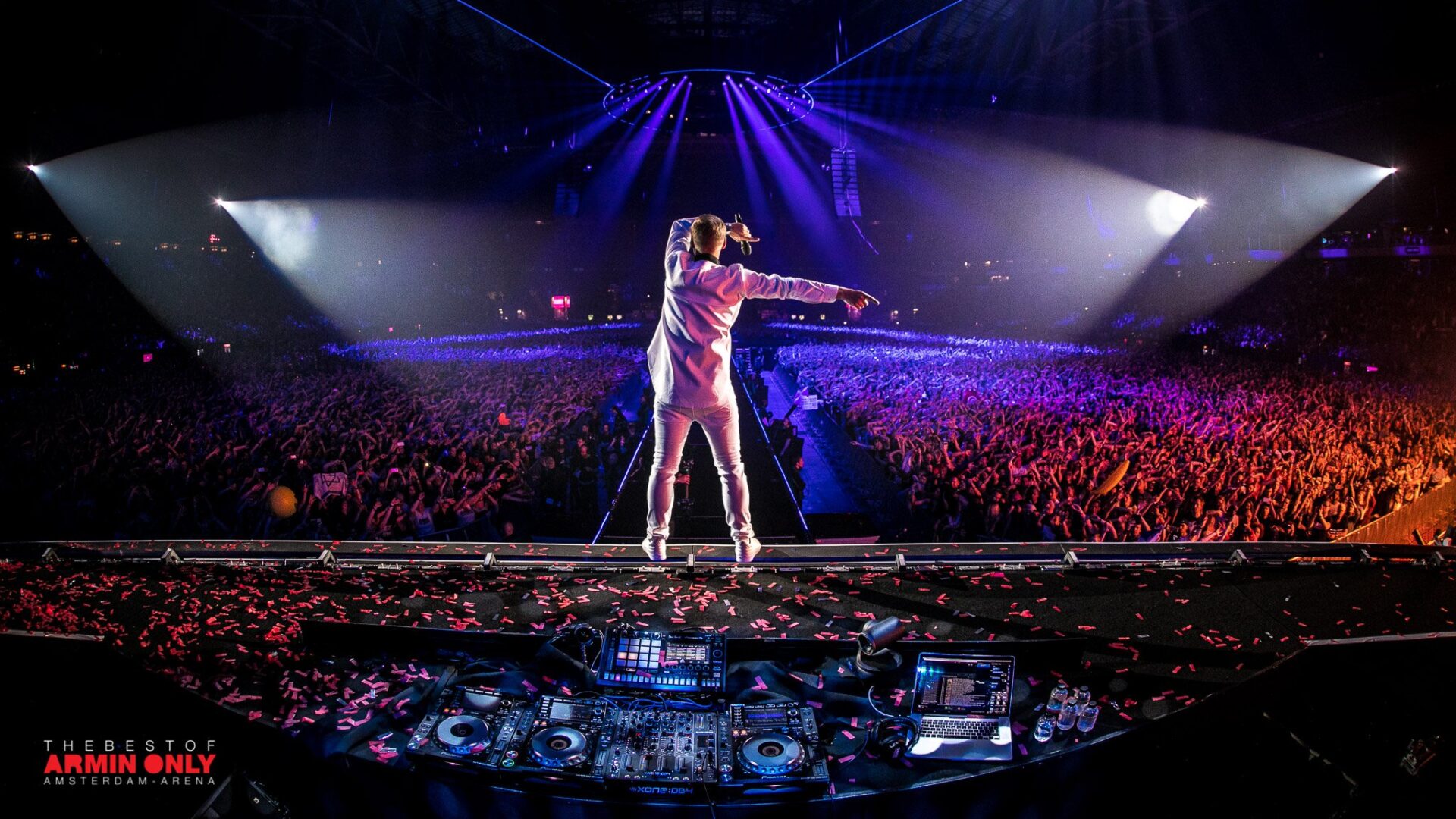 Parting Is Such Sweet Sorrow

Beyond all of the hype and spectacle, my favorite memories of the night are forever cemented in the connections that I made while dancing. I had brought my cousin Tom (who I hadn’t seen in 6 years) along to the concert and we had an incredible time catching up. In my most notable interactions, I made friends with a couple from Lithuania (my motherland) who I took pictures for, and we are now pen pals. I met another man who was a 45-year-old Dutch bodybuilder and he gave me tips on how to improve my physique. I follow his page on Facebook too. Tina, Donna, and I, are still friends and we keep in regular contact. We’ve been trying to find a time to meet again to see Armin perform.

The weekend left me with new knowledge, love, and friendships that I will forever cherish and nurture. I couldn’t have picked a better event or better artist to introduce me to the world of Electronic Dance Music. Armin Van Buuren is just getting started, and for those that are looking for the Armin experience, Amsterdam is the best place to be. And if you’re looking for a new, mind-numbing EDM concert experience, there is one and only Armin Van Buuren.

For tickets and information on ARMIN VAN BUUREN click HERE!