We are not born ravers. For every one of us, there is always one show that you consider to be the show that got you really into the scene. For me, that show was Magnifique. 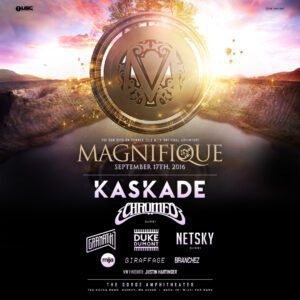 Magnifique was a show hosted at the Gorge in Washington State back in September of 2016, almost 5 years ago from the time of writing. If you don’t know what the Gorge is, it is an outdoor festival venue in Eastern Washington, right off the Columbia River. It is considered one of the most beautiful live music venues in the world, and the view from the hill is something you have to see once. Magnifique was headlined by Kaskade but included but not limited too, Chromeo, Duke Dumont, Mija, and Giraffage. It was run by the United States of Conscious (USC), a production company out of the Seattle area that shut down last year.

This event is what I consider to be my first official rave.

I had been to one camping festival earlier in the summer and had fallen in love with live music and the Gorge. So I convinced my friends to buy tickets to Magnifique just because I loved the venue and that was the only show we could get tickets for. At this point in my life, the only EDM that I had listened to was Avicii, Major Lazer, The Chainsmokers, and Adventure Club. And for most of those artists, I had very limited experiences with. I really had no idea of the world that I was about to get myself a part of. 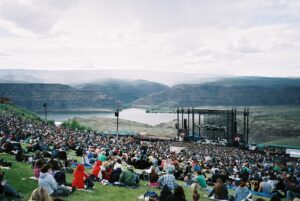 My friends and I drive from Seattle to the event that day and after a little bit of waiting got into the venue. For the first couple of hours, we chilled up on the hill. But then Mijja came and really getting into the groove of the music, I decided to go down into the pit. For most of the night, I went back and forth from the pit to the hill to meet up with my friends, who had decided to chill on the hill until Kaskade came on. I was having the time of my life in the pit, just dancing all stress and worries away from the previous month. To my surprise, I actually started to enjoy the music, something that I did not expect due to my disinterest in this type of music before.

Finally, my friends and I meet up just outside of the pit and go into the crowd right before Kaskade comes on.

It is crowded, but there is an air of excitement all around. Then, Kaskade comes up on stage and starts playing. And it is amazing. This set would change my life. I started really getting into the music like I have never before and rarely have since. I received my first ever Kandi. I started dancing with all those around friends or strangers. And of course, I started screaming lyrics to songs I have never heard before but feel like I’ve known all my life. Halfway through the set, Kaskade starts playing a mix of two songs, Atmosphere and Disarm You I would later learn, and it was at that moment that I knew that this was my scene, my people. This was the moment that I fell in love with EDM.

After the set is over, my friends and I head back to the car and drive back to my friend’s house in the nearby college town. The entire car ride home I couldn’t stop talking about the music and how much I loved the event. My friends even had to tell me to shut up I just couldn’t stop talking about it. That day I started looking up all the artists I had listened to, trying to find all the songs I heard throughout the night. I even discovered Illenium that night, one of my favorites, through his Disarm You remix. So many things that define what I love in the scene came from that night. From Illenium, Kandi, dancing, and so much more came from that night. I don’t think many forget their first real rave night, I know I won’t.