EDC Mexico, a place where despite everything that is going on we can all still see the light and dance as one. I attended EDC Mexico last year for my 25th birthday, my “golden year” spent in a city full of some of the most kind-hearted people I could have ever imagined. Although I paid no heed to the advice of family members, I traveled to one of the most dangerous cities…or so they lead me to believe. Once there, I had to completely submerge myself into a possibility of danger, although I was never alone a few hours into my journey the only real difference between this and a bigger city was the fact that I was the minority, I’m from a small town in Virginia so coming to a third world country shook me. I saw a lot of things I never thought I could, I knew I was in a third world country, not in Kansas anymore. The buildings weren’t very big, or nice, there was a ton of graffiti that gave it a very creative vibe. There was also graffiti everywhere.

Even though I would never go out at night by myself, there were times when my boyfriend and I would make late night beer runs and never once really felt bothered or scared. People were friendly, we made our way through the city with hand gestures and Google Translate because regrettably, we both don’t know Spanish. The only thing I did know how to say was “Tengo quince Gatos en mis Pantalones” which translated into “I have fifteen cats in my pants.” You’re welcome. For the most part, there were people in charge that could speak pretty clear English. The norms that we’ve created here are sometimes very different than in Mexico, like margaritas or queso, hard to get or a block of cheese that’s melted. The waitress was completely shaken when I kept saying “CHEESE…CHEESE?” With a puzzled look on her face. Absolutely not complaining, it was just something I had to get accustomed to.

I have friends from Guadalajara that we met up with the following day to take us under our wing, thank God. A large group of people from all over. We had one more day to hang out and get to know each other before the fest, and what better way to get to know each other than to eat?! Before planning for this trip the ultimate life-saver and something I never had to worry about because I brought it was Pepto! My significant other and I tried a lot of street food and stayed pretty in the clear because of it, seriously don’t test your “iron stomach” in a foreign country my friends, you may lose.

Day of: the nerves were more alive than ever, I couldn’t believe how happy I was to party it up in Mexico City! A long ways away from home, but oddly feeling quite at home. Guided through the gates, the bag checks, ticketing, and in we were. I looked around, and although I knew I was I different, we were all the same. Signs like “All Are Welcome Here,” willing to help and kind people never really ran shy & above all, Mexico really does know how to party. The music, the lights, the artists, the production, in particular, were something to be in absolute awe about. Electric Daisy Carnival 2018 was undeniably something for the books. Sometimes you need to get out of your comfort zones and try new destinations, this was my top pick festival of last year, not only does Pasquale Rotella deliver on his festivals but he always seems to have this way of bringing one another together. If it weren’t for his vision, I probably would have never met up with my friends from Guadalajara, but I wouldn’t have connected with so many other people as well, people I consider my friends now, my family now, places I can call home. It’s truly a great feeling to be able to visit somewhere in the world and not feel alone. I give this festival two thumbs way up. Mexico City will come to life in February, and you shouldn’t miss out! This year’s tickets are now on sale, head on over to https://mexico.electricdaisycarnival.com/en/tickets/ 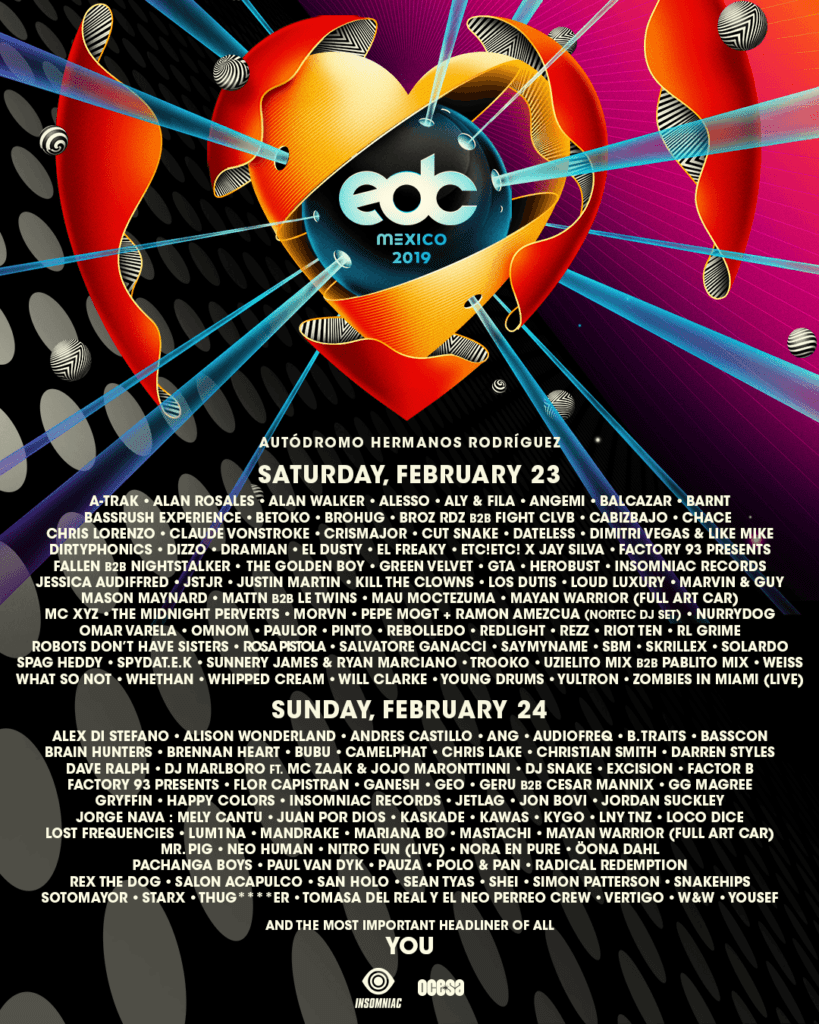