This past week I attended Electric Forest for the first time. This festival was located in Rothbury, Michigan from June 22nd-June 27th. It was almost an entire week of music, friends, and incredible vibes. 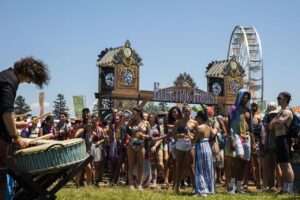 I arrived at the festival on the 22nd, which is an extra early arrival they added this year. I loved this because getting in was so much quicker and you had a few days to settle in before the festival itself, starts. We set up camp, made some food, and set out on a walk! Being my first time at Electric Forest, I set out to do a ton of exploring. The first few days we made friends with our campsite neighbors and overall, laid back for some over-do relaxation. For the first 2 days of early arrival, because the festival wasn’t open, they had ‘Main Street’. Essentially, this was a street before the gates of the festival with stages, food, and shopping. They also feature ‘The Brainery’ – an area where you can do workshops that they feature or yoga! Main Street also had a charging booth and a water refill station. 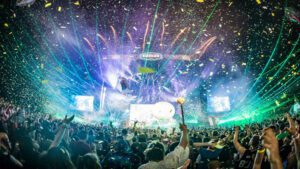 Fast forward to day 1 of the festival. Going into the fest was absolutely breathtaking. Everybody was friendly, delicious food was wafting from the vendors, and music is bouncing from stage to stage. I was speechless. That day I had the pleasure of seeing Big Wild and Disclosure – both of who were phenomenal to see live. The music goes until 2 am but if you’re still craving to boogie, they have a full lineup of RV sets – essentially in the RV camping area there’s a stage where the DJs play after hours. This is an absolute must-see at Electric Forest (a lot of DJs do secret sets there, too).

Over the course of the festival, I saw familiar artists and ran into some new ones, too! Some notable mentions are CloZee, GRiZ, Rainbow Kitten Suprise, Mersiv, Slander, Lettuce, Joe Hertler & The Rainbow Seekers, and Lotus. You can check out their full lineup here! 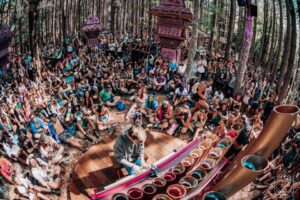 Finally, I want to touch on The Forest itself. There was a wedding venue, hammocks all across the trees so you always have a shady place to relax, the trading post, and even secret stages. One day, I took a nap in the hammock and woke up to some of the best music I have ever heard! There are fairy doors, quests you can do, really there’s something for everybody in there. And honestly, even with 4 days to explore I barely scratched the surface.

Electric Forest was truly one of the most incredible experiences. If you’re on the fence – go. You’ll meet beautiful human beings, listen to great music, and make priceless memories. Thank you so much Insomniac and Madison House Presents for putting this event on and I can’t wait to see you all next year!