There are a few changes this year to Electric Forest 2019, including one weekend and a new ticketing system, Elevate Tickets. Electric Forest will be returning to one weekend June 27-30, 2019 after having two weekends in 2017 and 2018. The change back to one weekend is part of a long-term conservation plan. Look forward to improvements to come in infrastructure including additional grass areas. This goes hand in hand with Ecology’s mission to be sustainable. Messages can be found throughout the forest saying reduce, reuse, recycle, refuse plastic, glowsticks prohibited.

With this announcement, there is buzz over the artists on this initial line up. There are many familiar faces returning to the forest. Electric Forest is so much more than a lineup. Everyone that enters the Sherwood Forest and Double JJ Ranch embrace forest family with support, encouragement, and homemade gifts. Forest family are your newly met neighbors and anyone you dance throughout the forest with. I highly encourage you to solely explore, walk through the forest as many times as possible looking up, down, all around to discover the endless intricacies, smiling faces, and artforms throughout.
Electric Forest started out having more jam bands and has seen more electronic dance music artists in recent years. 2019’s lineup includes some rap, dubstep, electro-funk, live musicians and new artists to discover. Jam bands include Lettuce, Pigeons Playing Ping Pong, SCI, Spafford, Twiddle and Grateful Shred. The daily headlining acts Odesza, Kygo, Bassnectar, and Zeds Dead are no strangers to the forest and have all played in the past. Daya, Honey Dijon, Quinn XCII, T-Pain, and Tierra Whack will be among the newest additions to the forest family!

Anomalie is a Montreal artist blending electronic jam sounds. Tauk is currently touring based out of New York and blends various genres together. FM-84 plays 80s pop from San Francisco. Riot Ten is bringing some hard trap from Texas. Horse Meat Disco is based out of London throwing LGBTQAI+ parties for everyone celebrating happiness and bringing disco back. Claude Von Stroke and Sacha Robotti will be representing from Dirtybird Players for house music. Just to name a few.

One thing that has returned from last year is the Wish Machine! Dream big forest family and post what you would wish for in return for making a positive impact in the world. Last year wishes were granted for a wide array of projects including pre-loaded MP3 players & burritos for individuals without access to music, Veteran artwork at the giving tree, water filters in Cambodia, Bone Marrow registration, forest last day cleanups, and planting trees to celebrate Wally.

Wally formally known as Walter Wojack owned the Double JJ Ranch was beloved for riding a four-wheeler throughout the forest. Wally passed away in April of 2017. Wally was a WWII veteran. In 1955 he purchased the JJ Ranch and began to plant 6” white pine seedlings. This where Electric Forest takes place in the Sherwood Forest. His spirit lives on.

Wally also believed that if one person could play then so could another, regardless of genre. The original festival in 2008 was named Rothbury Festival had members of Phish, the Grateful Dead, the Alman Brothers, and the String Cheese Incident present. No festival was held in 2010 and in 2011 Electric Forest debuted. The String Cheese Incident has played multiples sets at every Electric Forest since.

There are many ways to get involved in the forest including volunteering, performing, sustainability and various art opportunities. Submissions are already filled for Luminaria which are lanterns to commemorate loved ones who are here with us in spirit, but you can create your own personalized Luminaria in the forest! Keep your eye open as more plug-in programs get announced. What’s your favorite forest memory? 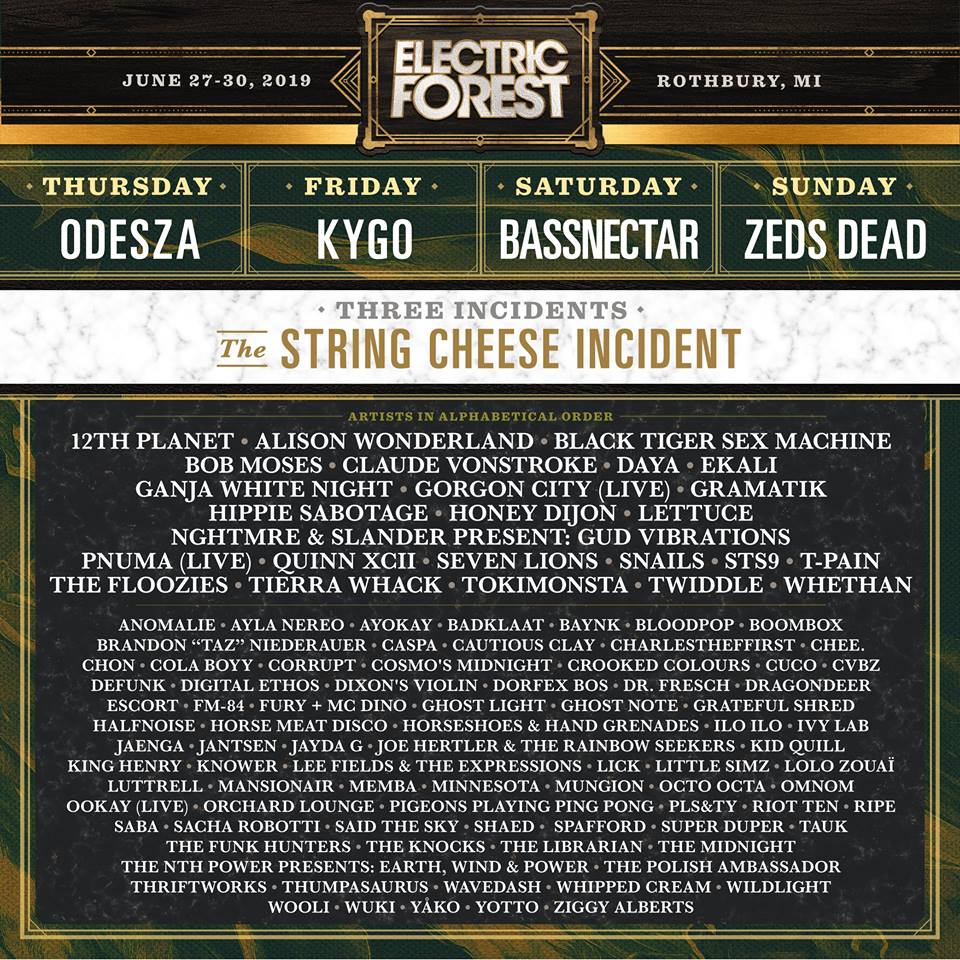