Get out your best glittery outfits and dancing shoes this new years eve, because Decadence is returning to not one, not two, but three states! Put on by Global Dance, AEG, and LiveNation,  Decadence is one of the biggest New Years celebrations in the U.S. Not only does it have a stacked lineup, but you have your choice of three states to visit. Colorado, Arizona, and Utah will be hosting Decadence this winter.

Arizona and Colorado’s lineups are pretty much the same over the span of the two days, Dec. 29-31. Decadence Utah is different from CO and AZ in the sense that it is only one day, Dec. 31, and the lineup is not the same. Decadence Utah is also put on by Global Dance, but instead of AEG and LiveNation, V2 is the other sponsor. 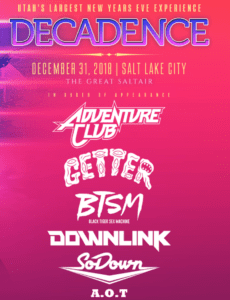 Utah’s getting a smaller taste of the Decadence lifestyle, compared to Colorado and Arizona. Granted, those two states have been hot spots for EDM for a little bit longer! Check out the lineups for CO and AZ Decadence below! This will be the second year that Utah has hosted Decadence, and the fifth year for Arizona and Colorado. 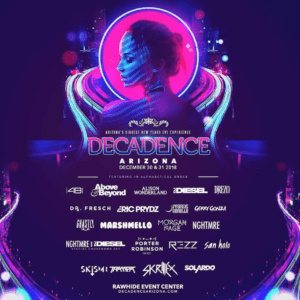 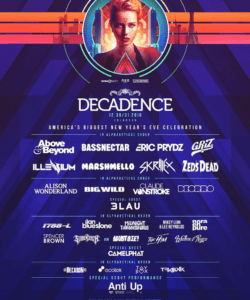 Don’t miss out on the hottest New Years Eve event! It’ll be one to remember! And don’t forget to tag @TheFestivalVoice to be featured on our page.