Skip to content
elrow is going to take you to outer space!!! Last time they were in North America in July of this year, they threw one of the first large scale events in NYC for 10-whole hours! Now, enjoy the party as elrow announces they’ll be closing out the year. Enjoy the most in-demand sci-fi pop culture-themed winter festival RowsAttacks! Ibiza is coming to New York with a post-apocalyptic invasion on two stages at Avant Garden in Brooklyn, NY.  The party takes place on December 11 for a mothership’s worth of partying. Plus, you can expect an otherworldly lineup from CID, Jackathon party curator Heidi, and Barcelona’s Rendher. This is one of elrow’s strongest lineups in years so it’s sure to be a special night for music-loving creatures from all corners of the galaxy. 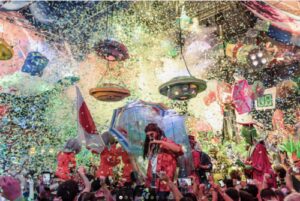 “We’re excited to have our first indoor festival in New York since pre-pandemic days! We’ll be making up our RowsAttacks tour as this has been the most requested theme by our American fans. Last but not least, this is my most favorite lineup ever in elrow North America.” – Michael Julian, Head of elrow North America 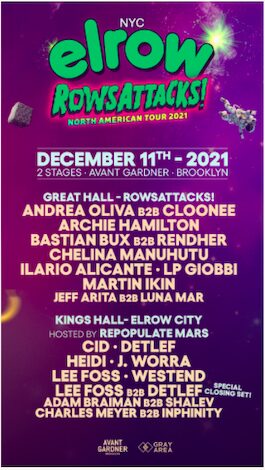 elrow makes sure their event will take you out of this world! The otherworldly performers and cosmic acrobats will engage and immerse audiences in an interplanetary experience. They’ll be dressed as extraterrestrials, astronauts, monsters, Yoda, and other sci-fi beings. With UFO sightings and space alien visitors in the news, and William Shatner blasting off into space, elrow’s futuristic outer space theme is on point. You will be able to check out larger-than-life props of UFOs, rockets, and more as the design team goes all out for this multisensory, interplanetary battle between Planet elrow and the evil Planet Sensible. Plus- you get the trendiest DJs in the house and techno universe will be spinning out-of-this-world beats to keep the international elrow crowd moving. Earth may be an apocalyptic wasteland but Planet elrow is teeming with friendly aliens of all types seeking out the best party in the galaxy. 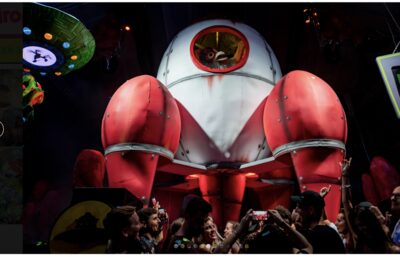 This is one of the most sought-after experiential events in the world. As a result, elrow’s strength comes from its reputation, with NPR calling it ‘the leading adult clubbing brand’. Since its 2016 U.S. debut in NYC which attracted 800 attendees, elrow has steadily expanded its footprint in the United States. We’ve seen them grow in notoriety and reputation with each show. Now, we see them attract more than 5,000 revelers per show as it heads into the fifth year of its New York residency. The New York Times gave praise, calling it an “art and music extravaganza … a roaming celebration that is part Cirque du Soleil, part Alice In Wonderland.” elrow hosts the globe’s craziest parties to attend right now with North American residencies in New York and Las Vegas.
All Aliens Are Welcome!
Doors Open at 5 PM  – 6 AM
Tickets: https://za.fan/elrowP1
What to expect?
Watch here
Posted in Event, Press Release and tagged Adam Braimin, Andrea Oliva, Archie Hamilton, Bastian Bux, Charles Meyer, Chelina Manuhutu, CID, Cloonee, Detlef, Heidi, Ilario Alicante, Imphinity, J. Worra, Jeff Arita, Lee Foss, LP Giobbi, Luna Mar, Martin Ikin, Rendher, Shalev, Westend
← What’s Up Elephante?Marshmello Joins Decadence AZ!! →
Don’t forget to follow The Festival Voice for all of your electronic music and festival news!
Instagram: @TheFestivalVoice
Facebook: @TheFestivalVoice
Twitter: @thefestvoice
Snapchat: @thefestvoice
YouTube: TheFestivalVoice