Session Victim today announce their forthcoming 11-track album titled ‘Needledrop’. The album includes new single and music video for ‘Made Me Fly’. The single is a collaboration with singer-songwriter Beth Hirsch. Beth is best known for her work with French duo Air on their 1998 album ‘Moon Safari’. The music video was created by animator Mike Scott and tells a computer game love story visually inspired by 80’s and 90’s point and click adventure games.

The German pair of Hauke Freer and Matthias Reiling are no strangers to releasing quality long-format albums. The duo rose through a discerning community of DJ’s. For instance, they have previously released three consecutive albums on tastemaker label Delusions of Grandeur culminating in 2017’s “Listen To Your Heart”. 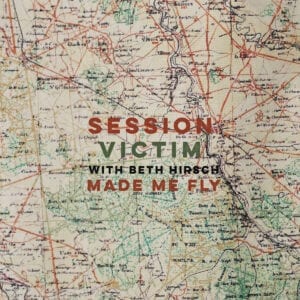 Their latest and fourth studio album is set to be released on ‘Night Time Stories’. This is the London based sister label to the coveted ‘LateNightTales’. The collaboration marks a notable move towards the downtempo dynamic of artists like Nightmares on Wax, DJ Shadow and Portishead. For instance, artists that have all played a strong influence in Session Victim’s variety of output over the last decade. ‘Needledrop’ provides a suite of both uplifting and easy-listening moments. In addition, the tracks boast refined and understated individually, yet cohesively crafted with the honest musicianship and inarguable credentials that we know of production duo Session Victim.

As accomplished producers, Session Victim have been intent on delivering a characteristic body of work for uninterrupted play. And with ‘Needledrop’ they have landed with significant inspiration from the lavishly textured and subtly layered jazz and soul compositions that found their way into late 90’s trip hop. For instance, the group fuses an array of live instrumentation and organic groove through their intuitive sampling sessions. As a result, Session Victim’s fourth album succeeds in actively engaging the listener’s mood and intellect in equal measure.

A setting, a mood, all exposed to the almost random dropping of the stylus on a vinyl record; ‘Needledrop’ as the name suggests, positions Session Victim among downtempo’s most quality works by delivering a genuine feeling of intuitiveness in its production approach. The album is entirely natural in composition yet flawlessly precise in execution.

Album opener ‘Bad Weather Mates’ sets the tone with a palette of retro soul and feel-good warmth of instrumental hip hop. This continues right through to ‘Still High’; as authentic an exhibition of their strengths as record collectors as their nuance as producers.

It takes significant commitment to do so, yet Session Victim have displayed experienced restraint to avoid the album’s tracks being lured back to a 4/4 dancefloor formula. In addition, the songs retain a fusion of jazz, electronica and low-slung house music for which their energetic international DJ sets have become synonymous.

With this album, Session Victim have focused their attention on a large arsenal of dusty influences across long forgotten vinyl. In addition, 90’s computer games influence the album. As a result, the album rediscovers the intuitive and playful sides of their production personalities, while also demonstrating their cherished music knowledge.