Wow, May sure is flying by. Personally, I cannot believe that it is already May 22nd!! But here we are, getting ready for festival season! While you wait, be sure to check out these awesome new tracks. 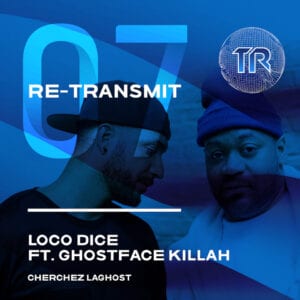 Nu Strut pairs up with superstar vocalist and producer Wreckno in their new single “Pornstache,” out on Electric Hawk Records on May 21st. Pairing disco-funk with bad bitch bass music, this track is sure to fill the dance floor. Leading with a 70’s inspired guitar riff, “Pornstache” embodies a charismatic sound that writes itself as the sound of the summer. Wreckno’s infectious lyrics and vocals paired with Nu Strut’s energetic sound design keep the groove and vibrant intensity flowing. Choral breakdowns featuring a crescendoing drum lead-up takes us into the main guitar motif we hear throughout the track. The motif continues throughout the entirety of the track, making “Pornstache” our new hot girl summer anthem.

Lakou Mizik and Ray premiered the album’s debut single, ‘Ogou (Pran Ma Kwen)’, via NPR World Cafe, giving a telling look at what’s to come. Characterized by vibrant strings, traditional Haitian rhythms, and a jubilant chorus, ‘Ogou (Pran Ka Mwen)’ is an impassioned plea to the Vodou spirit of Iron and War for protection from the brutality of life’s daily battles – “Ogou, you brought me here, take care of me.” 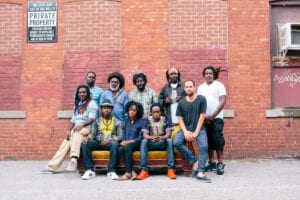 Since first bursting on the scene, the UK sensation has perfected the progressive sound with a tireless output that has traversed melodic techno, euphoric house, after-hours-ready deep house, and a myriad of other engaging influences. He’s established himself as a dynamic force and is now applying his versatility on a three-track package that transcends generations and genres. The lead single “Thanks, Guy” drops on Friday, May 21, and is not too far in front of the other two records which land on the label the subsequent week.
Stream HERE

Diplo, Elderbrook, Andhim- One by One Music Video

Diplo, Elderbrook, and Andhim are three of Dance Music’s best-known artists in their own right. Now, they come together on the legendary FFRR imprint and Diplo’s Higher Ground to deliver the summer-ready house anthem ‘One By One’ out now. They now release the Official Video, directed by Stefano Ottaviano the London-based filmmaker and visual artist who has worked for high-level brands including Nike, Mercedes, MTV, and Disney. With a particular flair for visual effects and art, he creates a stunning backdrop, highly surreal, replicating the featured actor multiple times, as if they were reinventing themselves, again and again, creating a dream-like visual and blurring space and time.
Stream HERE 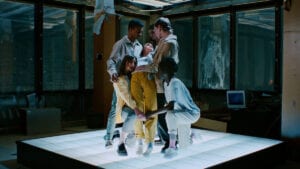 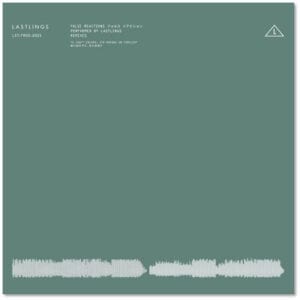 Conrank has been cooking on some serious gas lately as we see another release making it four for four! Starting back in January when we hailed Conrank’s newfound heavyweight rock sound, each month was followed up by ‘Mind State’ and then ‘Bonfire’ leading into ‘Psych Out’, a punky rock energetic track powerful enough to blow out your ear drums!
Could Conrank be leading to something? Are we about to see an incredible transformation in weight division? The art shows the rising of the crown as the darkness looks on from the shadows… ‘Psych Out’ is Conrank’s continued exploration of shredded guitar riffs and his own vocals which are getting better with each release!
Stream HERE 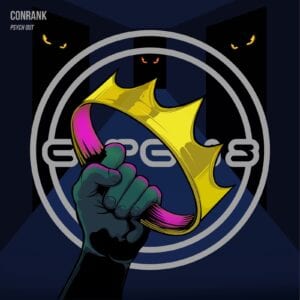 James Righton shares a performance video for his new single “Release Party” which was released earlier this month on DEEWEE. The video was directed by Steve Mackey & Douglas Hart at London’s Denmark Studio. Righton said, “The video was a breeze. I turned up, danced for an hour in Cuban heels, and then left. Steve and Doug are visual wizards” 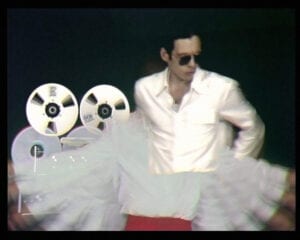 Following the release of “La La La, ” which has already surpassed over 5M combined streams, the adventures of AREA21 continue with today’s release of ‘Pogo. ’ The song exudes the feeling of being completely uninhibited, living life wild and free, which makes it the perfect soundtrack for the coming summer months. Written by Martin Garrix and Maejor, Martin also plays electric guitar on the track, one of the many talents from this multi-faceted artist. 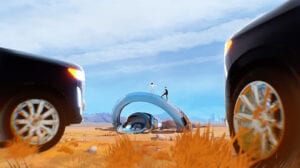 Out now, Parra for Cuva’s wafting and delicate melody is interrupted by Innellea’s dark, acidic thump, which punctures the dreamy hypnotic soundworld through to a digital and mesmerizing dystopia. While the original track is an upbeat trance-inspired groove, Innellea dims the warmth by adding his trademark dynamic techno sonics and raw accelerated beats to masterful effect. 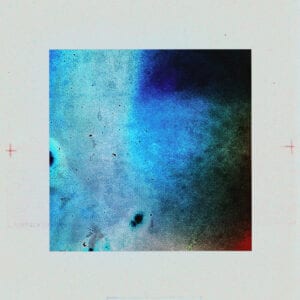 With ‘No Lover’ releasing last month, LOOPERS is ready to wrap up all his output from the last couple of months in an EP called ‘Greed’. Adding two extra tracks that go by the name of ‘Human Error’ and ‘With You’, the DJ/producer has collected a banger selection of tracks for everyone to enjoy over the weekend.

DubVision are finally back with some new heat called ‘Bad Blood’. Not steering away from their successful output of the last couple of months, this one will for sure please the fans. 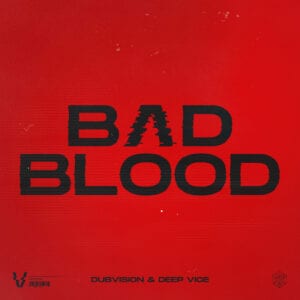 Joining forces on ‘Think I’m In Love’, the forward-thinking pair deliver a track that is set to be a regular on radio and across dancefloors globally. Packed with a funky bassline and disco cowbells, ‘Think I’m In Love’ drives home the signature sound of Vantage and reinforces the undeniable influence of Todd Edwards impact on the worldwide music scene. 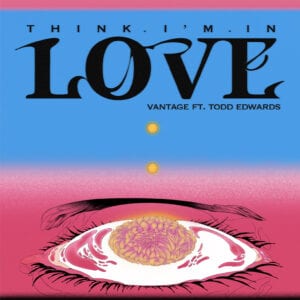 As they continue on their inspiring trajectory, the young pair drop a new single, ‘The One’. Released via Another Rhythm in partnership with Three Six Zero Recordings, the powerful euphoric track is an exercise in tension arguably beyond their years and affirms TIBASKO as one of 2021’s breakout artists to watch.

The pair’s effortlessly indulgent production quality on “The One” forges an ambitious sense of scale; a reminder that their output is also aimed above and beyond the dancefloors, with the biggest festival crowds and global airwaves in sight. 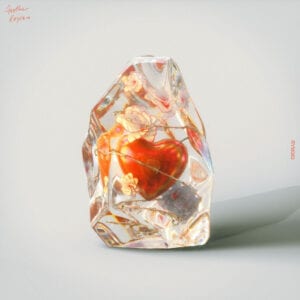 Emerging from the shadow of the previous single ‘We Are Not Alone’, ‘You’ consolidates their influences and redefines their target audience, being suitable for both packed club experiences and home listening environments during life’s more intimate moments. Modulating synths taking center stage and ineffably ethereal vocals echo across the breaks of the track, whilst being tied down by lush melodies all created by GHEIST in their Berlin-based studio. 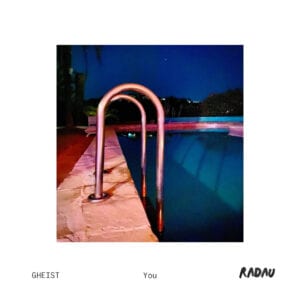 The line between our physical and digital world has been blurred more than ever these past 12 months; a maelstrom of live streams, virtual meetings, and frenetic blockchain activity. We are living out our dystopian futures in the present, a fitting context for the debut compilation EP from Spirit Bomb, the world’s first entirely virtual artist record label

As its digital tendrils extend deeper into our physical realm, the Spirit Bomb universe has enveloped some of contemporary music’s top producers, enabling them to wander the uncanny valley hand in hand with their virtual counterparts on Spirit Bomb 001. 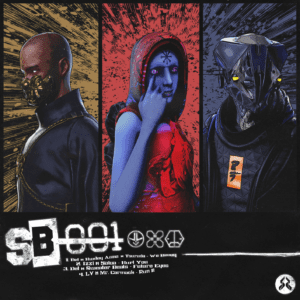 Unsurprisingly the combination of his auteur-like sensibilities and a singer who – like Fulber – only writes when she has something significant to say – has created a lightning strike of a track. For his part, Rhys has created one of his most floor-flooring C.O. productions to date, setting its somber, ethereally signaling bleeps off against urgent breakbeat surge and brilliantly charged synths.

Catching its tonal drift, Jaren’s verses pick up on the nuance bound into its opening elements, in turn allowing full reign to her extraordinary range. Her song – rich in metaphor-peaks with a chorus that implicitly leaves the titular creatures’ meaning, but engagingly open. 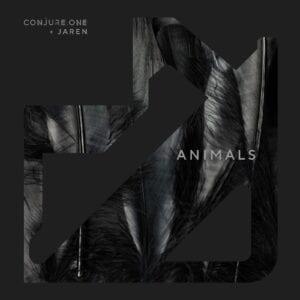 ‘Feel It’ was premiered this week during Comic Gate’s second ‘MOSAIIK’ livestream from the rooftop of the Selina venue in San Miguel De Allende in Mexico’s central highlands.  This UNESCO World Heritage city was voted Condé Nast Traveller’s Best Small City In The World in 2020 (and for the third year running no less!), and it provided a stunning backdrop for Cosmic Gate to showcase their new music.
This made for a welcome return to Mexico for Cosmic Gate – the country that hosted the event that many consider their greatest-ever performance: ASOT Mexico 900.
Stream HERE

Fatum has been label regulars since ‘Mandala’ in 2015. Some of their label hits include, ‘Chocolate’, a cover of Tangerine Dream’s ‘Love On A Real Train’, and super collaboration ‘All In’ with Genix, Jaytech & Judah. They’re also prolific remixers, recently reworking Gabriel & Dresden’s ‘Coming On Strong’, 3LAU and XIRA’s ‘Tokyo’, and Nox Vahn’s ‘Brainwasher’.
They returned to the label in early 2021 with ‘Out Of Space’ (feat. Trove), followed by their cover of Planisphere’s ‘Symphotek’. Both tracks join ‘This Is The End’ on the ‘Stream Starting Soon EP’, alongside ‘Make It Rain’ and the title track ‘Stream Starting Soon.
Stream HERE 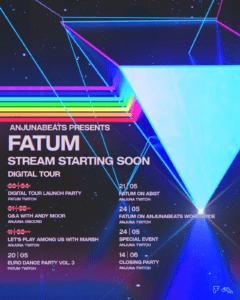 “‘Pretty Boys’ is a 1980s fever dream, and like our favorite rock & roll dream songs, it was written in a rush of inspiration and grounded with a cinematic guitar riff,” says Forgivers frontman Jed Winokur. “While the verse vignettes hint at the larger idea of longing that the chorus drums up in “love can’t seem to light the way,” there’s also something else lurking in the lyrics — the idea that what we long for may also be longing for us too. And even though the ephemeral love in the song is always fleeting, it’s saying there’s still plenty of strength and beauty for us all to stumble upon.” 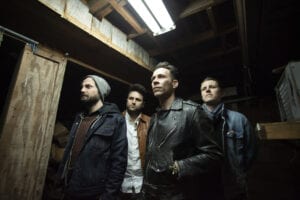 SofaBurn Records and Mojave Desert-based Americana duo Starlight Cleaning Co. are excited to announce the release of the band’s self-titled debut album. Out today, Starlight Cleaning Co. is the brainchild of Rachel Dean and Tim Paul Gray, two musicians who originally met at Pappy and Harriet’s in 2015 and who turned their respective solo acts into a full band three years ago, resulting in a soulful and beautifully focused operation that sounds like they could have thrived in both the Seventies and Eighties. Together in harmony, Dean and Gray recall the great male-female duos such as Buckingham Nicks, Sonny & Cher, Gram & Emmylou and John Doe & Exene. Stream Starlight Cleaning Co. in full on Spotify HERE and order the album via SofaBurn Records HERE. 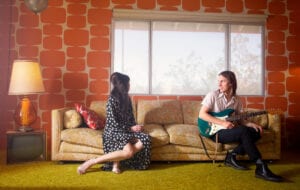 Lonely Archer Records and Los Angeles-based dream-pop quintet Nightjacket are excited to announce the release of its brand new EP, Following The Curves (download and stream HERE). Representing a turning-of-the-page for the band, Following The Curves introduces its new vocalist, Canadian-born Andrea Wasse (Digital Daggers, DeadXLife). Recalling the haziness of Eighties and Nineties touchpoints such as The Cocteau Twins, Mazzy Star, and The Sundays, Following The Curves is also a personal exercise in chemistry and musical partnership. 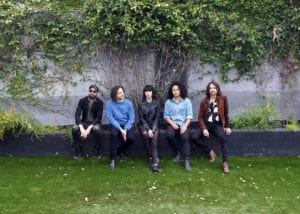 Happy May 22nd! Check with The Festival Voice next week for more content!