Jay-z’s Made in America Music Festival has announced its return this year on Labor Day Weekend – Saturday 4th and Sunday, September 5th – in Philadelphia. Like many other live events, Made in America was canceled in 2020 due to COVID-19.

The lineup for the upcoming festival includes headliners such as Justin Bieber and Lil Baby along with other top-tier artists such as Doja Cat, Megan Thee Stallion, Kehlani, and A$AP Ferg (just to name a few). Still not convinced by the lineup? 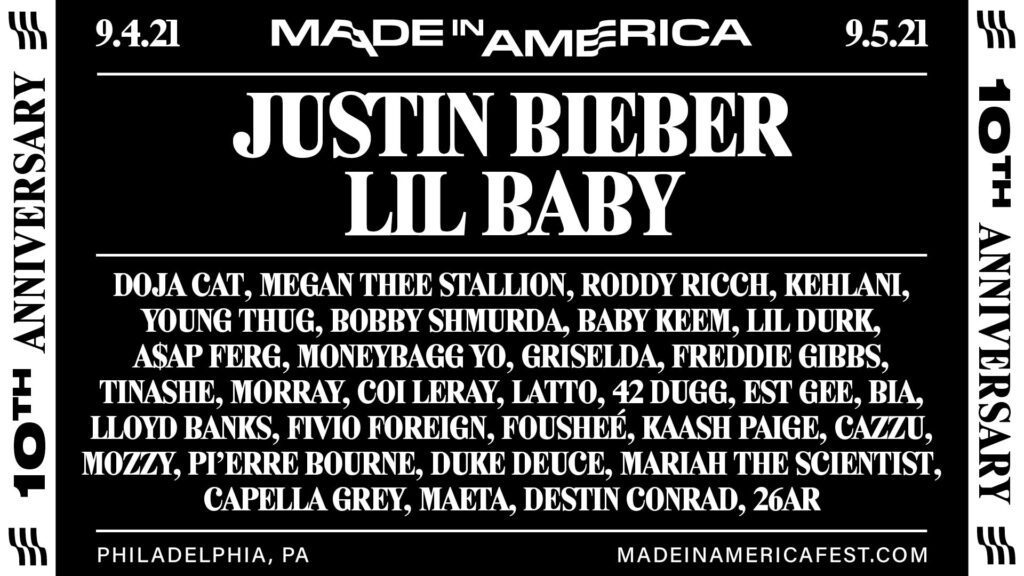 How about going for a cause?

The Made in America festival is doing more than just entertaining. Produced by Roc Nation, and curated by rapper Jay-Z, the Made in America festival 2021 will benefit the ACLU (American Civil Liberties Union) of Pennslyvania as its official charity partner, and a portion of net proceeds will also support The REFORM Alliance, a nonprofit that aims to reduce the number of people trapped within America’s carceral system, and the festival will host numerous other charities in addition to the stated above. Since the creation of this two-day festival in 2012, the event has generated over $135 million in economic impact for the city of Philly. How ’bout dem apples? GA and VIP tickets are still available!

The 10th annual festival will return to the Benjamin Franklin Parkway.

“This year will be like no other, as Made In America celebrates 10 years of music history-making moments,” stated JAY-Z. “The artists’ performances will be even bigger and Cause Village will host a wider range of amazing philanthropic organizations. We look forward to sharing incredible memories with our festival attendees and the city of Philadelphia.”

Come for the music, or come for the cause (or preferably both). A festival that wants to better the future sounds like a pretty good festival to me. Until then, see ya’ll on the dance floor 🙂