Ready for an unforgettable weekend? Well, get wrecked with Holy Ship! Wrecked! This is one of the most coveted parties on the planet and they’ve just announced a ton of new information! The 2022 edition will take place at Hard Rock Riviera Maya, Mexico December 13-17. And get ready for one weekend of a lifetime, because this includes activities, theme nights, branded party takeovers, and day-by-day stage lineups for the Main Stage, Beach Stage, Pool Stage, Sunrise Stage, Tropic Stage, and Wrecked Stage. 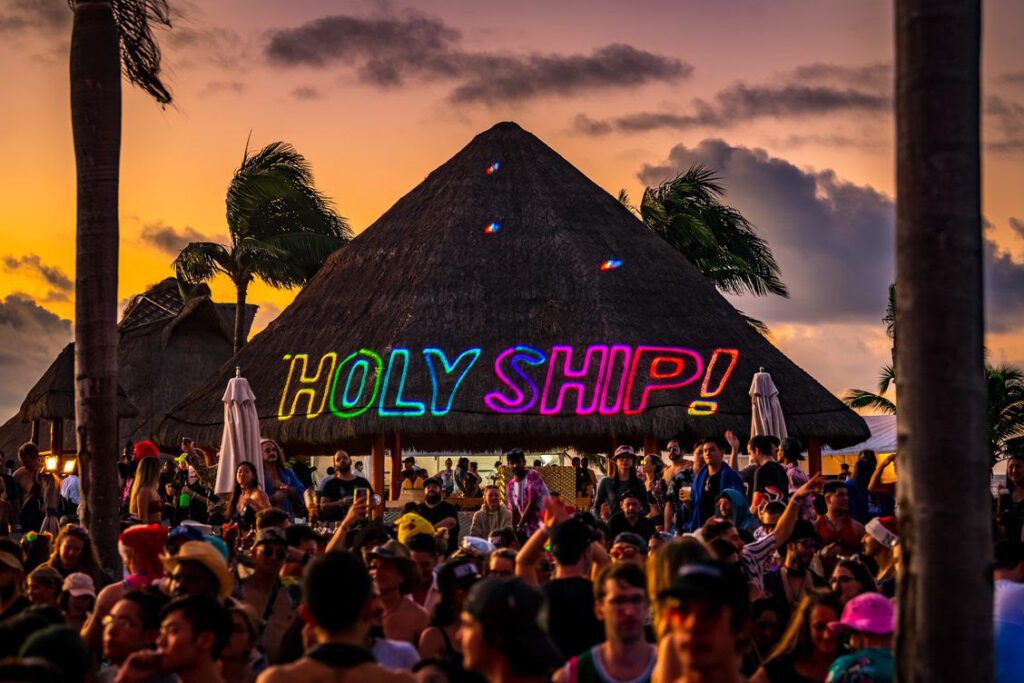 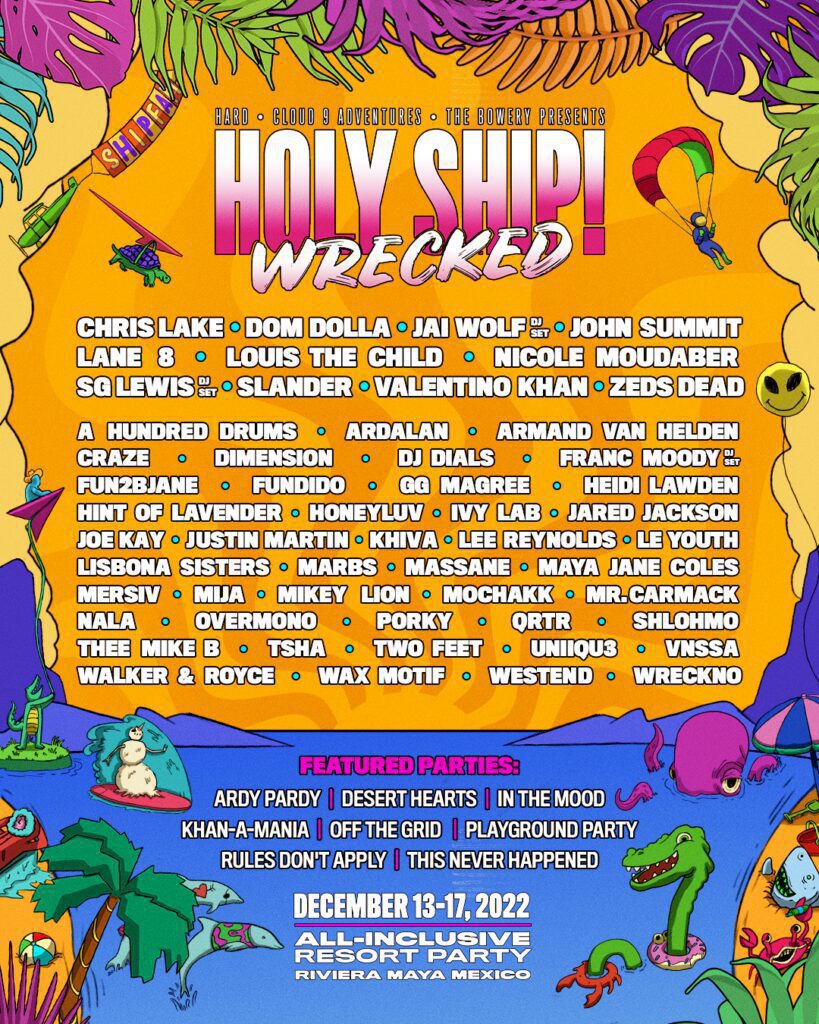 Of course, you get more than just music with Holy Ship! There are tons of amazing activities to take part in such as the Desert Hearts Master of the Universe Pageant, Valentino Khan’s World Sumo Wrestling Federation, the Lisbona Sisters’ Spa Retreat, and Wreckno’s Jungle Catwalk Competition featuring special guest judges GG Magree, Mija, and Khiva. Newly announced theme nights including Wildin’ Out All Things Jungle and Y2K That’s Hot give attendees the opportunity to don their most creative outfits as well. More details regarding the iconic Sunrise Set will also be announced in the near future.

Day one highlights include Nicole Moudaber’s In the Mood takeover at the Tropic Stage with Maya Jane Coles and HoneyLuv. Walker & Royce’s Rules Don’t Apply takes over the Wrecked Stage with the groove-heavy duo teaming up with Ardalan for their Escapade project, along with Justin Martin, VNSSA, and QRTR. The Main Stage Kick Off Party is led by Zeds Dead, Dom Dolla, Westend while the Sunrise Stage sees Mersiv, Shlohmo, UNIIQU3, and A Hundred Drums. During the day, attendees can take a dip at the Pool Stage with the Lisbona Sisters and Dials or bask at the Heaven Pool with Le Youth and fun2bjane. Sounds like a blast!!!

We’re not done yet because day two commences with a Big Beach Blowout soundtracked by Nicole Moudaber, Walker & Royce, HoneyLuv, and Thee Mike B. Valentino Khan brings Khan-A-Mania to the Pool Stage alongside GG Magree, Wreckno, and UNIIQU3. In line with the Wildin Out: All Things Jungle Theme, the Sunrise Stage welcomes special In The Jungle DNB All Night sets from Zeds Dead, Dimension, Ivy Lab b2b Craze b2b Mr. Carmack, and Mija. Get WREKCED at the Wrecked Stage, which sees DJ sets from SG Lewis, Jai Wolf, Franc Moody, and Fundido b2b Hint of Lavender while the Tropic Stage’s performers include TSHA, Overmono, QRTR, and Heidi Lawden. Main Stage headliners Chris Lake, Armand Van Helden, Mochakk, and Porky b2b Marbs bring the house flavor for night two. This is going to be legendary!

Did we mention that was only Day 2? Party starter Ardalan rings in day three with an Ardy Pardy at the Tropic Stage with Mochakk, Joe Kay, Jared Jackson, and Nala. The “Bass Downs, Hands Up” dubstep party at Wrecked Stage is not to be missed with SLANDER, GG Magree & Mija’s So Tuff So Cute, Wreckno, A Hundred Drums, and Khiva all playing. Switching up the vibe will be the So Fresh So Clean Pool Party enlisting Joe Kay, Craze, a Shlohmo Hip Hop Set, and Thee Mike B for a hip-hop-themed party certain to get attendees in the proper headspace for Y2K theme night. House music reigns at The Beach Stage with Dom Dolla b2b John Summit and Armand Van Helden among the bill while more trap-heavy sounds can be found at the Pool Stage with Mersiv and Mr. Carmack. Main Stage acts include Louis The Child, Lane 8, Jai Wolf, and Two Feet. The Sunrise Stage is capped by Maya Jane Coles, TSHA, Overmono, and fun2bjane.

Ready to enjoy the resort life? Resort amenities will be beyond amazing with 9 all-inclusive restaurants, cocktail and tequila bars, complimentary room service, a waterpark, zipline, extreme sports, and a fitness center, making this a truly worry-free, action-packed experience. You can relax in style! Those looking for R&R can spend the day being pampered at the Spa and Salon or kicking back in their own private hot tub and balcony before getting back out on the dancefloor. 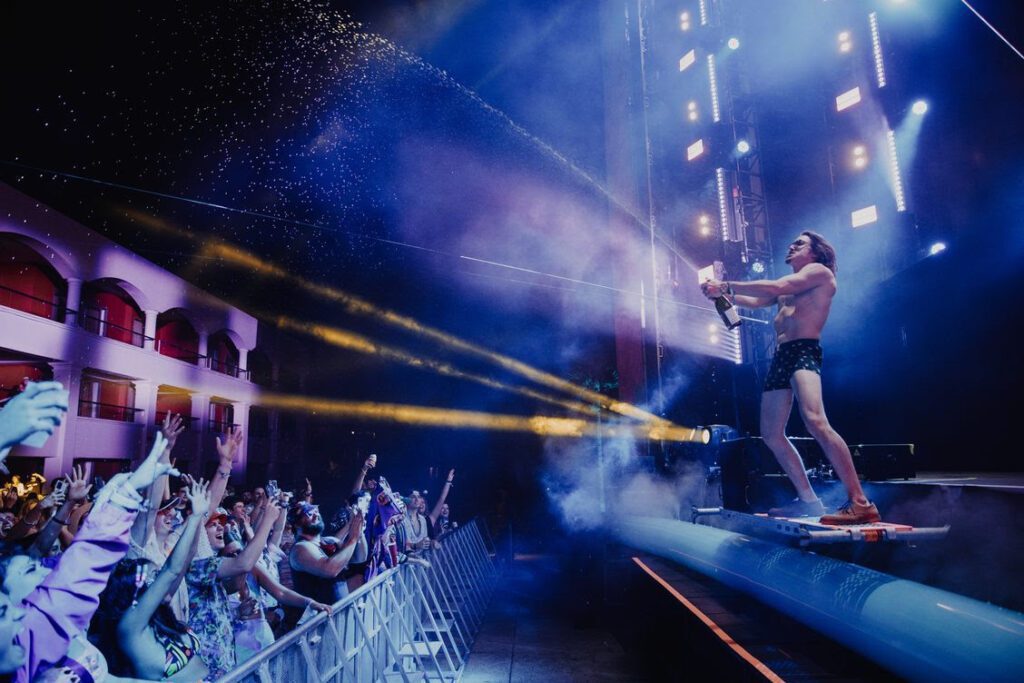 Ready to join the Shipfam? The idyllic locale, massive lineup, and Shipfam community make Holy Ship! one of the best events in the world. Add in the WRECKED feature, and we’ve got an amazing weekend lined up. Stepping into this wild and wonderful world of mischief makers and wildcards grants unprecedented access to a global network of warmhearted party-starters. Making no distinction between veteran or virgin, fan or artist, Shipfam unites to break down social boundaries and bring the ultimate feel-good vibe to the sunny shores of Mexico.