View All
Ready to live it up this March? Well, get ready, because SXM Festival returns from March 8-12, 2023 for a musical and cultural experience like no other. It is taking over AN ENTIRE ISLAND. That’s right, this is the ONLY festival in the world to do so! Prepare yourself because the Caribbean gem of Saint Martin | Sint Maarten is going to be one hell of a party! Prepare yourself for one crazy week of world-class electronic music. There will be so many fun things to do, such as beach parties, villa experiences, and boat parties. Add that into hilltop sunrise sessions and peak-time boho parties. This will be one week you will NEVER forget!
SXM Festival has proven itself since 2016 to be more than just another festival. This crazy experience has grown to massive heights, becoming one of the most talked about gatherings in the world. It is the epitome of the culture it encompasses such as Caribbean, French, and Dutch culture. Over 35 countries come together for some of the BEST underground electronic music for 5 days and 5 nights of extraordinary music.
Let’s talk about the lineup for a minute! SXM Festival’s 2023 lineup features many of the most celebrated names in the international house and techno scene. The bill is led by Grammy-nominated, triple platinum production duo CamelPhat, Music On leader Marco Carola, pioneering electronic producer Dubfire, and the musical experience of Astra Club – a b2b set from DJ Tennis and Carlita. Additional highlights include beloved Italian artist Francesca Lombardo, the reinvented house sensation Gordo, and Brazilian stand out DJ and producer Mochakk, along with the return of Swiss favorite Sonja Moonear following her memorable 2022 performance and a live set from visionary melodic house and techno veteran Rodriguez Jr. 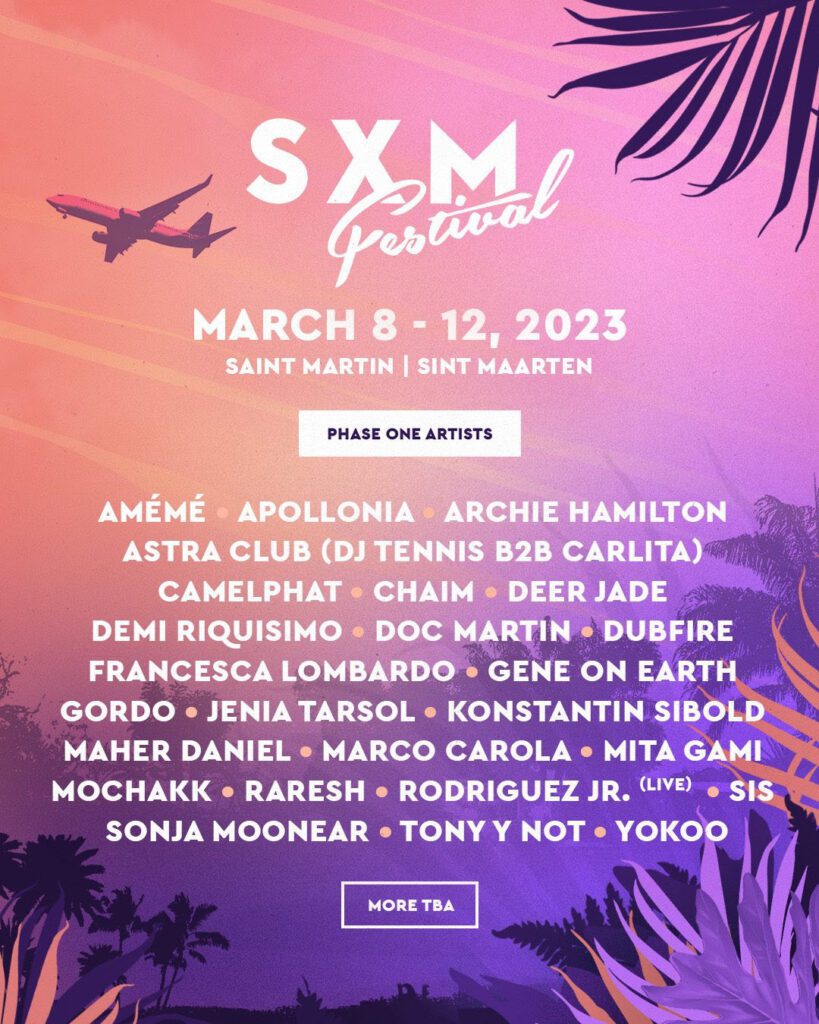 The lineup’s global depth extends further with emergent West African DJ and producer AMÉMÉ, Palestinian DJ Maher Daniel, French exports Apollonia and YokoO, Berlin-based DJ and producer Gene On Earth, and German producer and co-founder of the Common Sense People event series Konstantin Sibold. A diversity of styles round out the lineup from the likes of acclaimed selector Doc Martin, Moscow Records and Moss Co. imprint head Archie Hamilton, the mystical melodic sounds of Deer Jade, and psychedelic house producer Mita Gami among others.
The party venues are simply incredible, starting with the legendary Happy Bay. The secluded private beach nestled in the jungle serves as the main evening venue and is home to the iconic Arc Main Stage and the immersive Ocean Stage. Other highlights include Boho Beach Club, the perfect place to chill out and escape during the day, and the infamous Villa Party, accessible only with a VIP ticket. Experience a revival of the luxury only bygone movie idols of the 60s jetset have lived, combined with modern-day luxury and design. This party is definitely one of the highlights of the festival. This exclusive estate, Sandyline, is a showcase for the chic, a day time rendez-vous for your inner rock star. Sounds like a win! 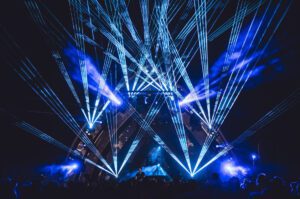 And if you’re going to go all the way to a private island takeover, you might as well go VIP! Get the best of the best because VIP Ticket holders receive access to exclusive areas with lush amenities at Happy Bay, priority table service, a chill-out area, a dedicated VIP bar and special cocktails, pop-up bars, VIP washroom, surprises and more.
But that isn’t all because VIP Ticket holders are also guaranteed first access to the ultra-exclusive limited capacity Satellite events; The Panorama Party and Boat Party. Whew! The Panorama Party gives attendees the chance to party at the peak of Sint Maarten’s highest mountain with breathtaking 360-degree views of the best Caribbean sunset. And I’m telling you, that is something you don’t want to miss out on. That Venue has been used for the Cercle live stream and has to be seen to be believed. Other Satellite Parties include the Boat Party, setting sail at sunset on the largest lagoon in the Caribbean. Also this year, a new Catamaran Cruise will take 100 people to the most beautiful spots with food, drinks, swimming and a surprise DJ. VIP Tickets also allow advanced table bookings for each venue. 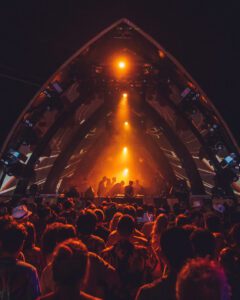 Want to have the BEST possible experience? Well, be sure to book your experience directly through SXM to get some added benefits such as Private Airport transfer, Admission directly in the Villa, Ultra VIP parking at Happy Bay, Dedicated VIP Host & Concierge Services, Priority Table Service, Photo Shoot, Pre-Festival styling sessions, hosted backstage visit and more.
For the 6th edition, the event will continue to build upon its deep connection with the cultural and ecological fabric of the beautiful host locale of Saint Martin | Sint Maarten. It’s important for the festival to leave a smaller footprint and to replenish the local environment. They do so by taking part in initiatives such as going paperless, planting palm trees, saving energy with LED and solar lights, and eliminating plastic waste throughout the festival while collaborating year after year with local talents, it is the mission of SXM Festival to become increasingly sustainable throughout their growth. The festival also has a no-trace policy: every venue is transformed to be more beautiful at the end of each event. 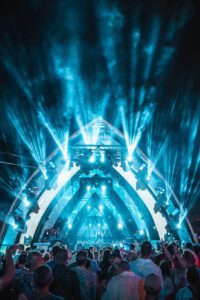 Whether you are a returning vet or a first-timer, SXM Festival and the beautiful island of Saint Martin | Sint Maarten holds rich cultural surprises behind each twist and turn. It is truly a sum of its parts and a voyage of a lifetime.
Tickets for SXM Festival will be available to purchase on Friday, January 13th. Those interested in purchasing passes or learning more can head to their official website. The Phase Two lineup will also be announced at the end of January with more exciting artists. 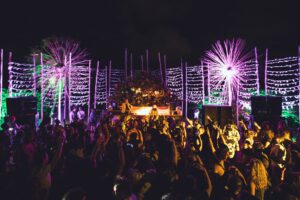