If you’re in the bay area, you need to check out Noise Pop Festival! This is San Francisco Bay Area’s premier independent music and arts festival and now, they’re proud to reveal the initial lineup of music performers scheduled to perform at next year’s festival taking place February 20-26, 2023. Festival badges are on sale now with individual concert tickets becoming available for purchase this Friday, November 18 at 10:00 a.m. PT via www.noisepopfest.com.

For nearly three decades, Noise Pop Industries has been a part of the San Francisco scene with thousands of concerts and festivals across Northern California. This will be the 30th anniversary of the main festival for the brand, Noise Pop Festival! This will be amazing with tons of music concerts, art shows, film screenings, happy hours, secret after-hour parties, and more taking place nightly over the course of a full week in February.

Similar to years past, the 2023 lineup will ultimately offer fans a meticulously curated selection of iconic indie-rock darlings, boundary-defying up-and-coming acts, rare reunion shows, anniversary album plays, and Bay Area debuts from international performers, along with more than 100 local performers found here in the Bay Area. The initial Phase 1 music lineup is listed below and available online at www.noisepopfest.com. 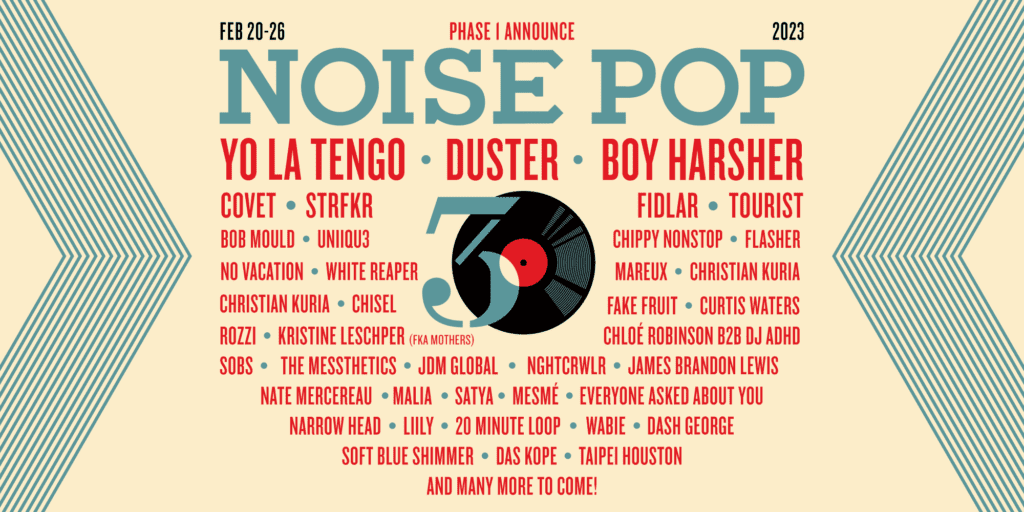 Kicking off the festival on February 20, organizers will welcome a very special opening night celebration at Great American Music Hall featuring performances from several 90s throwback acts and cult favorites like Chisel, Everyone Asked About You, and 20 Minute Loop; while punk rockers FIDLAR performs an intimate kick-off show at Bottom of the Hill; and dream-pop band No Vacation returns to SF for an unofficial homecoming performance at The Chapel. Tons of great acts!

Later that week on Wednesday night, indie rock trio Yo La Tengo will perform at The Fillmore in support of their latest album This Stupid World being released next February. This is the band’s first full-length record since 2020; as homegrown San Jose’s own Covet will play their biggest Bay Area show to date to celebrate their own upcoming album release.

And there’s so much more because on the following night, February 23, a pair of beloved festival alumni will return to perform at Noise Pop including electric-pop trio STRFKR headlining The UC Theatre as punk rock visionary Bob Mould offers fans a special solo electric set at The Chapel.

Friday will mark a total takeover of the Bay Area with more than eight concerts taking place across the city that night including festival headlining performances from Boy Harsher as the electro-pop duo performs at the three-story mega-dance club 1015 Folsom; and San Jose-born lo-fi rockers Duster, who host their biggest Bay Area show to date at The Regency Ballroom. Rising R&B singer and SF-native Christian Kuria will also perform at The New Parish; Canadian-Nepali singer/songwriter Curtis Waters will headline a special concert at Rickshaw Stop presented in partnership with Popscene; and Grammy-Award-winning William Edward Phillips will bring his electronic music project Tourist to Public Works for a late-night dance party.

Additional phase one lineup highlights include a four-night residency at SFJAZZ Center’s Joe Henderson Lab featuring James Brandon Lewis and local favorites Nate Mercereau and Satya, plus other acts to be announced soon; as well as the highly anticipated return of the international event series HE.SHE.THEY. with special guests like UNIIQU3, Chippy Nonstop, Chloé Robinson, among others. The festival will also mark the San Francisco debuts for acts including Ted Leo’s pre-Pharmacists band, Chisel; as well as LA-based musician Aryan Ashtiani’s underground synth-pop project Mareux; in addition to the very first North American show for the Singaporean rock outfit Sobs. This is awesome!

Participating venues next February will once again include a number of historic concert halls and landmark venues like Great American Music Hall, Bottom of the Hill, The Chapel, Rickshaw Stop, The Regency Ballroom, August Hall, The New Parish, Gray Area, Public Works, and 1015 Folsom, among others. Entry to all of these iconic spaces will soon be available to those who purchase weekend festival badges, in addition to ticket-buyers at individual festival concerts.

“We are fortunate to be celebrating our 30th anniversary this year. It’s been a continuous joy and privilege for us to make our small mark on the history of music and culture in the Bay Area during this time” said Kevin Arnold, Founder and CEO of Noise Pop Industries.

Weekend tickets are on sale now although tickets to each of the newly announced concerts will become available for purchase starting this Friday, November 18 at 10:00 a.m. PT via www.noisepopfest.com. All badges grant access to all general admission (non-reserved seating) music concerts, happy hours, after-hours, and film screening events throughout the weeklong festival, which is great! Fans are encouraged to act fast as badges are limited and pricing will increase with each wave of new performer announcements.

This year’s festival’s artwork was designed by none other than Shepard Fairey, considered one of today’s most accomplished and sought-after contemporary artists. Learn more about his incredible artwork by visiting his company Obey Giant at www.obeygiant.com.

Stay tuned for more festival announcements through the official festival website at www.noisepopfest.com. Any sponsors looking to get involved in next year’s event are encouraged to contact brett@noisepop.com.