These parties in paradise are seriously the best. I mean, who doesn’t want to party in paradise? And Pollen Presents is at it again, this time they are teaming up with the legendary dance music producer Tiësto for a unique experience in beautiful Cancun, Mexico. Going by the name Tiësto: The Trip, the destination getaway will take place March 31-April 3 while giving attendees the chance to escape from reality and enjoy paradise. Sold!

It’s going to be a wonderful time! First off, there’s a lineup curated by Tiësto that will feature friends, collaborators, and some of his favorite artists. In addition, the experience will also include sunrise to sunset beach parties, cultural explorations that will help guests better understand the region, and more. Sounds like a blast!

In addition to the standard package, you can enhance your trip with some great adds ons to the main package!

For example, this will include a boat party and cenote excursions. There are also two VIP upgrades available! These epic additions include a Platinum VIP option featuring an exclusive meet & greet with Tiësto, which you cannot miss out on, bottomless brunch hosted by Tiësto, complimentary welcome drinks, VIP priority entry lines into all venues, exclusive VIP areas at The City and Mandala Beach, transportation to and from the airport to the hotel, and access to dedicated VIP bars. Wow!!! That’s a crazy VIP package!

If you’re a Tiësto lover, this one is for you. You get to experience MULTIPLE  performances from Tiësto, along with a sunrise set from his VER:WEST alias. That is just the tip of the iceberg though because the lineup also features genre-defying American / German duo SOFI TUKKER, English DJ, producer, and television personality Joel Corry, acclaimed American house producer influenced by his Indian heritage KSHMR, and Canadian production and DJ duo Loud Luxury. 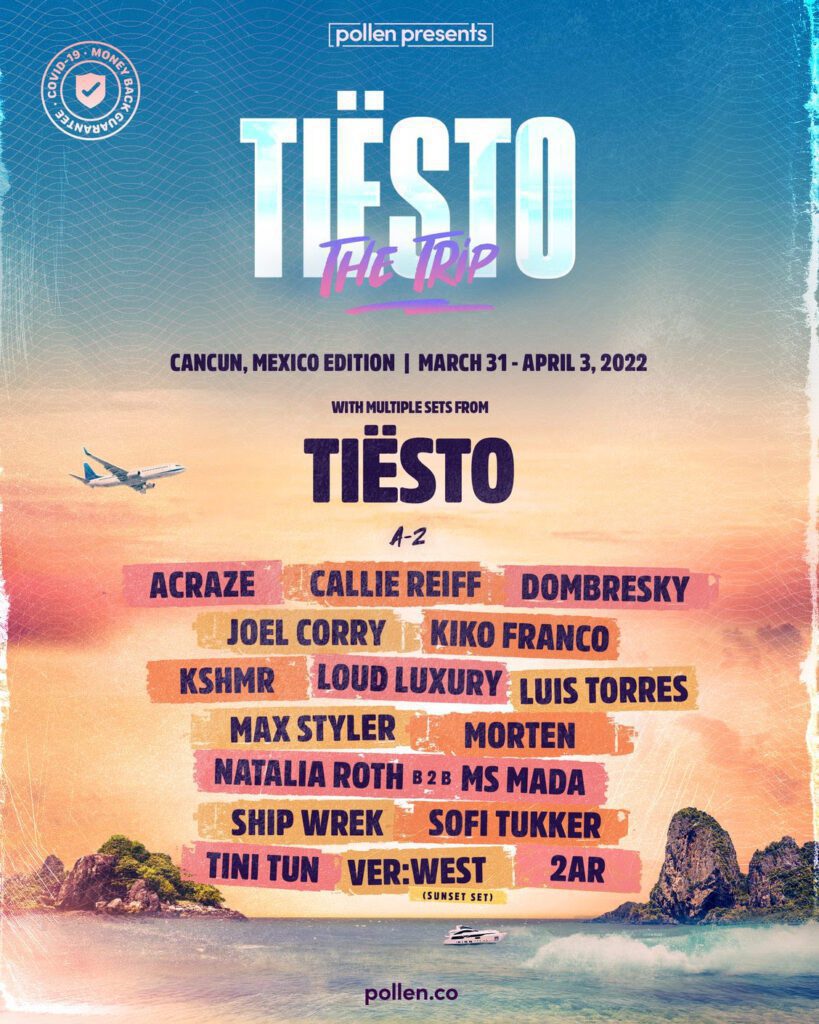 Of course, Tiësto is a name that needs little introduction. If you’re in the dance music scene, you have heard of the legend! The ​​Grammy Award-winning, multi-platinum Dutch DJ and producer is one of the the biggest artists known around the globe! He has spent his time spreading the love of dance music across the globe. He’s been at this for almost 30 years and we owe him a ton! The international icon has continued to be a pioneer and innovator since day one. As a result, this trip will allow fans of Tiësto to witness the legend himself showcase both his performance and curation abilities.

For more information about the experience, including payment plans, package upgrades, and FAQs, visit pollen.co to stay up-to-date with the latest in lineup, pricing, and news.