San Diego has got it going on this summer! Their summer season looks set to kick into another gear with the launch of DAY.MVS in Waterfront Park this August. The two day city-center festival will touch down on the beautiful grassy oceanfront location August 7 + 8, showcasing some of the most popular names in electronic music. Ready to dance? I sure am!

This event was brought to you by the crew behind the beloved CRSSD Festival. Just this past week, they hinted at a possible Fall return. Now, DAY.MVS will be a back to basics two stage event focused on house and techno. This event is perfect if you are a huge house or techno fan!

Alright, ready for that lineup?

DAY.MVS’ August edition will be led by the immensely popular Grammy-nominated tech-house sensation Fisher. He is a larger than life personality who was formerly a pro-surfer, who has deep ties to the San Diego region. He’ll be joined by the melodic and progressive house star Lane 8. Not only will Lane 8 perform, but he will also help curate a stage on Sunday. US house icons MK and Felix da Housecat, and the rapidly rising talents of Nora en Pure and Monolink. Bring on the heat! 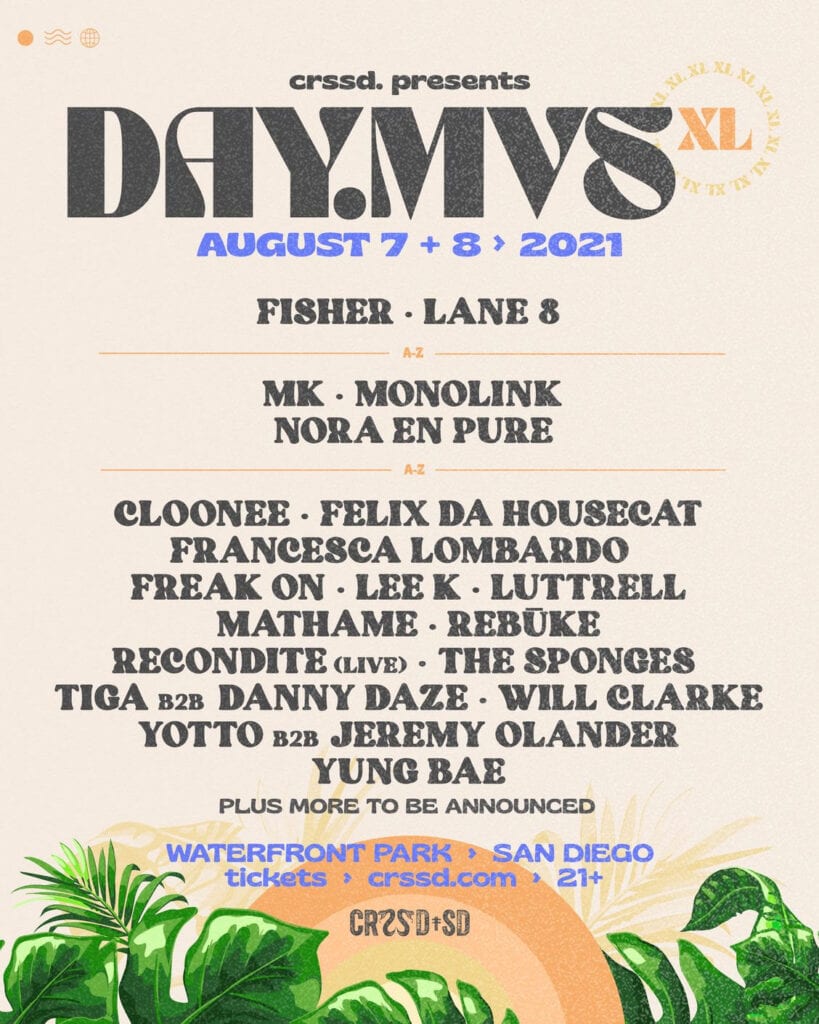 Not only that, but the event will also include a special back to back between Tiga and Danny Daze, a live set from Recondite, Yotto, and Jeremy Olander going back to back. And of course, we can’t miss a set from the beloved resident Lee K. In addition, The Sponges and Yung Bae will bring the sunshine and funk.

Not only will you get to enjoy the daytime festival, but DAY.MVS will host after-parties across the city in San Diego venues. In addition, you can set sail for after-hours events on a boat departing from the Waterfront Park location. Food and beverage offerings will include food stands, mixology programs, and pop-ups from local San Diego faves.

Ready for those tickets? Sadly, they aren’t on sale until June 8th at 12 PM PDT. Grab them HERE!