Suwannee Hulaween has unveiled its brand new, genre-bending lineup! The 9th edition of the festival is star-studded and dynamic! The festival returns home to the Spirit of the Suwannee Music Park in Live Oak, Florida from Thursday, October 27 – Sunday, October 30.

This festival is one of the best out there! It has been going strong since 2013. The Halloween-themed music, arts, and camping festival has evolved into one of the country’s biggest and best cross-genre affairs. They focus their time creating unique cross-genre lineups including some of your favorite genres such as electronic, jam, and indie to bluegrass, funk, soul and hip-hop, Suwannee Hulaween’s ability to abolish genre confines is evident year after year. 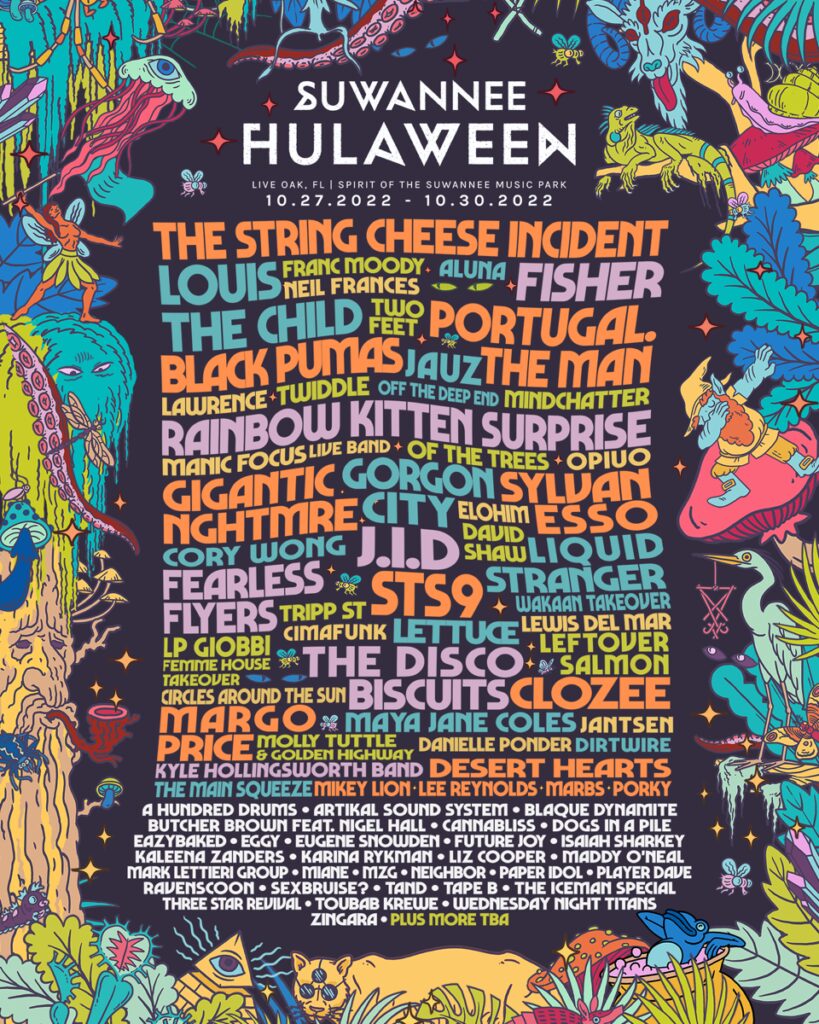 And for those electronic fans, Suwanee Hulaween will feature some of the biggest names such as French trailblazer CloZee, versatile Chicago act Louis the Child, GRAMMY-nominated producer Fisher, as well as debut performances from beloved UK house duo Gorgon City and Bite This label-head Jauz in a special ‘Off The Deep End’ house set. Festival favorites Big Gigantic and NGHTMRE will also perform as their collaborative Gigantic NGHTMRE project for the first time at Hulaween. Sounds like a blast to me!

If you still aren’t sold yet, we’ve got more to give ya!

And we’ve got some excellent acts to round out your weekend such as industry-shaking powerhouse Aluna, electro-pop producer, singer/songwriter Elohim, multi-award-winning London artist Maya Jane Coles, multi-instrumentalist Mindchatter, genre-bending bass music act Of The Trees, bass experimentalist Opiuo, and many more.

Tickets sold out super quickly for the blind presale. They have re-released tickets for you so if you want them, you had better grab them QUICKLY! Suwannee Hulaween tickets are now available to the public via https://suwanneehulaween.com/passes/

Suwannee Hulaween has spent the last ten years hosting artists from all corners of the dance floor at the Spirit of the Suwannee’s idyllic grounds. This is the PERFECT backdrop for your amazing weekend which will allow you to fully immerse yourself in Florida’s lush, enchanting nature.

Hulaween’s Spirit Lake is well known as one of the BEST and biggest leading art experiences across America. The brand has so many amazing sculptors, fire/metal workers, painters, thespians, and lighting designers. Attendees can revel in lakefront projection mapping, hypnotizing light shows, interactive installations, and both visual and performance art, catch performances at Spirit Lake’s two stages, and groove into sunrise at the Silent Disco.