The Peach Music Festival Is A Peach

The Peach Music Festival is back this year from July 1st until Independence Day in Scranton, PA. Housed at the Pavilion at Montage Mountain, this festival brings the best jam bands, funk artists, and fireworks each and every night. This Live Nation festival is also produced by the Allman Brothers Band. The band’s members will each play a set, and for their 50th anniversary, they will come together again as Live at Fillmore East.

The top headliner this year is Oysterhead, a rock supergroup that everyone should have the privilege of seeing live. Heavy hitters like The String Cheese Incident, Joe Russo’s Almost Dead, and Pigeons Playing Ping Pong will play two sets each. Other amazing jam sets will come from the likes of Umphrey’s McGee and Moe. The amazing Turkuaz will be playing an homage to Remain in Light, the stellar Talking Heads album, by playing the masterpiece in its entirety. Dark Star Orchestra, a Grateful Dead cover band, is another one you don’t want to miss. If you like something a little different, synthwave stars Doom Flamingo will be out to play. Some have noted that bluegrass is not as strong in the lineup this year, but there is plenty of talent to keep you partying on the mountainside. 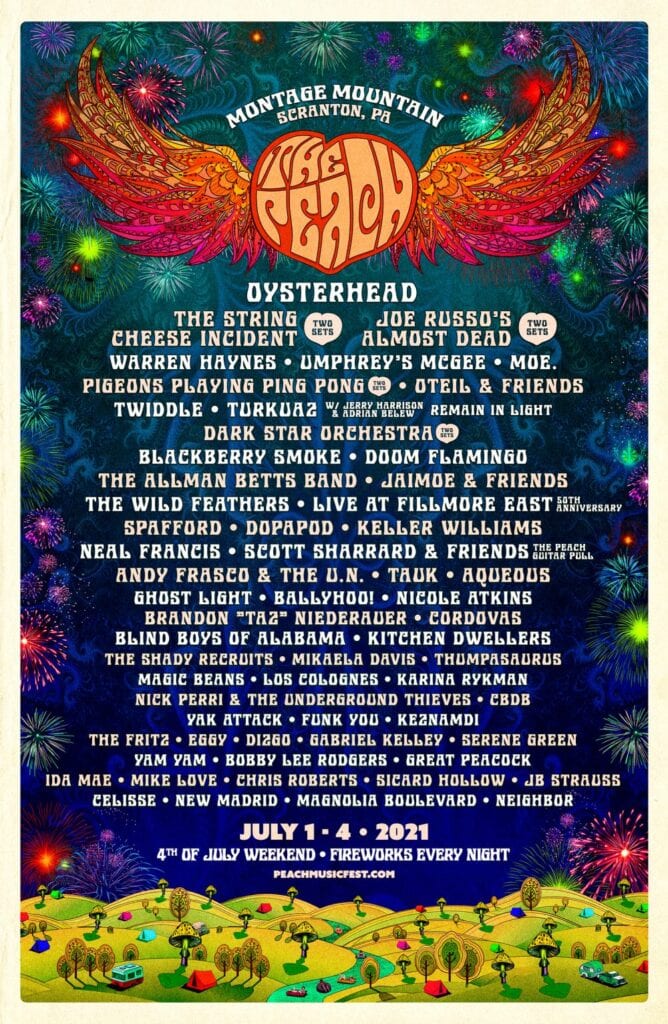 There will be on-site camping and vendors, and the montage Mountain Resort is just a shuttle ride away. If you’re in Pennsylvania this July 4th, you don’t want to miss out on one of the biggest jam fests in the country this year. Get all the details from The Peach Music Festival and see you at Montage Mountain!
Posted in Festivals and tagged Dark Star Orchestra, Joe Russo's Almost Dead, moe, Montage Mountain, Peach, Pigeons Playing Ping Pong, The String Cheese Incident, Turkuaz, umphrey's mcgee
← BSH Island Announces Their Full Lineup!!ARC Music Festival’s Lineup is Complete!! →
Don’t forget to follow The Festival Voice for all of your electronic music and festival news!
Instagram: @TheFestivalVoice
Facebook: @TheFestivalVoice
Twitter: @thefestvoice
Snapchat: @thefestvoice
YouTube: TheFestivalVoice
Home » Blog » The Peach Music Festival Sure Is A Peach!