Chicago!! Are you ready for ARC Music Festival?? Today ARC Music Festival has announced the complete lineup for its Labor Day Weekend 2021 debut. This up-and-coming festival is anticipated to be the new crown jewel of the Chicago festival season. ARC will bring a globally curated electronic lineup and immersive experience to the birthplace of house music’s Union Park. What a fantastic time!

Who Is Added To The ARC Music Festival List?

The festival’s lineup additions boast some of the moments most in-demand dance music talent. You’ll find some of the best on this lineup! Channel Tres (DJ Set) continues his meteoric rise at the debut event! This is following a string of huge collaborations with the likes of Tyler The Creator, Tinashe, VanJess, SG Lewis, Robyn, and more. But the lineup isn’t complete yet! ARC’s lineup also welcomes the leader of Detroit’s next generation and Planet-E mainstay DJ Holographic, Repopulate Mars boss Lee Foss, new school Drumcode star Layton Giordani, Elrow’s Toni Varga, and crossover Ninja Tune upstart TSHA. Winning!

A new stage environment has also been added to the list! The ARC Car Stage powered by The GoodBus is an epic score! The GoodBus is a full-length school bus that has been converted into a fully functional mobile sound stage with a 10,000-watt speaker system. This stage announcement comes with the addition of some of Chicago’s favorite resident DJs including Alissa.Jo, Alex Kislov, Inphinity, and more. 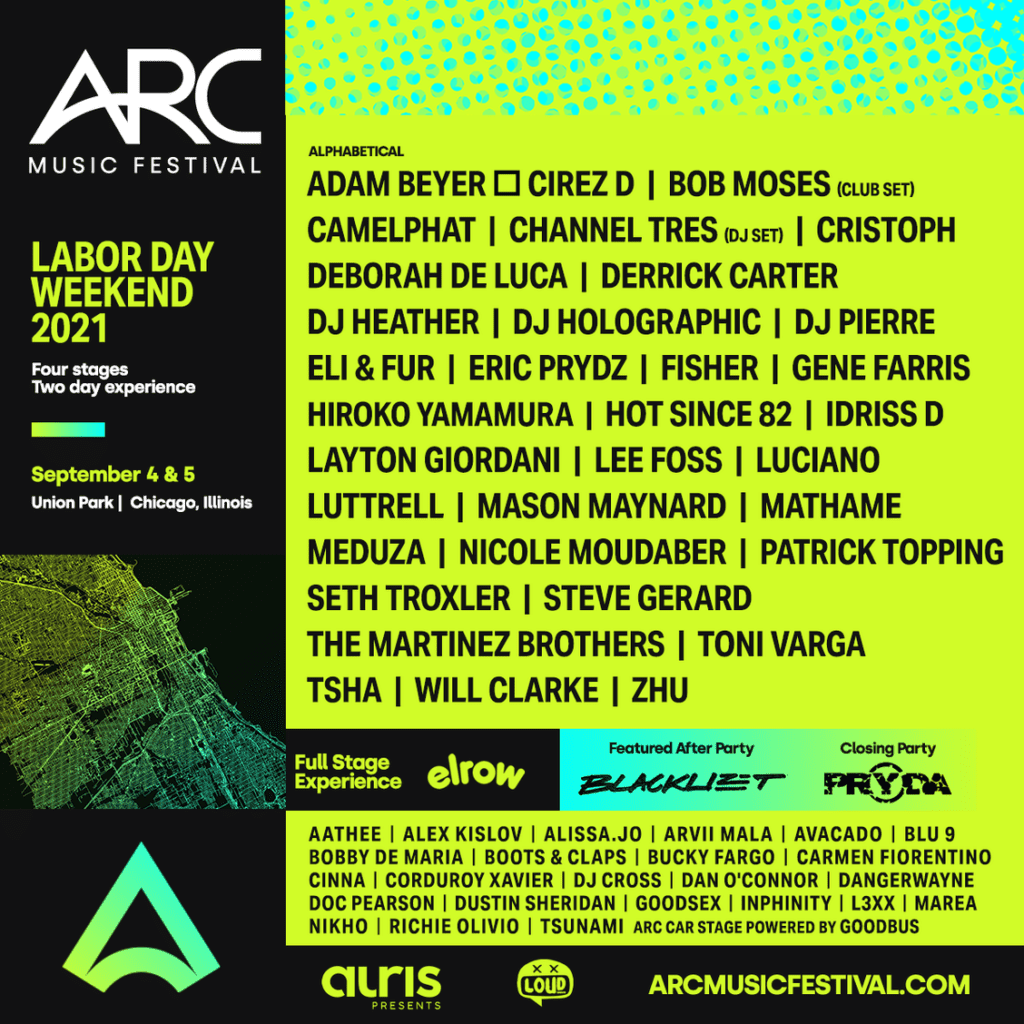 These artist additions join an already stacked lineup representing everywhere from the basement clubs of Europe, the beaches of Ibiza and Tulum, to iconic festival stages around the world. And then you’ve got Eric Prydz. The man himself will take over the city with all three of his renowned projects! This will make ARC the first event to host all three of his alias’ in a single weekend. You’ve got to be there to witness history! Attendees will also be treated to festival sets from Eric’s namesake identity, the US festival debut of Cirez D alongside Drumcode legend Adam Beyer, as well as his progressive house alias Pryda for a sold-out closing party at RADIUS available for purchase by festival-goers only.

The lineup was already stacked before the newcomers but the debut festival also welcomes modern house music icons FISHER, Patrick Topping, Seth Troxler, Hot Since 82, Camelphat, Meduza, Will Clarke, Mason Maynard, and a special club set by Bob Moses. The city itself will be represented with heroes such as Derrick Carter, Gene Farris, DJ Pierre, DJ Heather, and Hiroko Yamamura. The international techno scene will be represented by Deborah de Luca, Luciano, and Nicole Moudaber. In the meantime, ZHU brings his renowned multi-genre live performances to center stage in Chicago. ZHU will also present his BLACKLIZT project to the city for a special after party at Radius on September 4th available only for festival pass holders – tickets.

The extra perks will be out of this world. Renowned Spanish party outfit Elrow will make its North American multi-day festival stage takeover debut at the inaugural edition of ARC with its ‘PSYCHROWDELIC TRIP’ production. Elrow’s signature stage design, performers, and hijinx have made it one of the most celebrated brands in the world, touching down for bespoke events annually in Barcelona, Ibiza, New York, London, Dubai, Miami, Las Vegas, Sydney, and many more key markets.

ARC will extend far beyond the music, creating a cutting-edge experience that mirrors the culture and artistry of its host city. Chicago is truly one of a kind. Attendees can expect curated production elements and art to guide them between each of four immersive stage environments. The event will also act as a showcase of Chicago’s culinary prowess, offering an elevated and distinctly local event. These efforts will be led by the newly formed Auris Presents and Loud Crowd teams who bring collective decades of professionalism from their independent endeavors at Paradigm Presents, and more. ARC fans will also be treated to intimate after-parties across Auris and ARC partner venues RADIUS, PRYSM, Concord Music Hall with others to be announced.

It is with brighter days ahead that ARC charts a path forward for dance music’s diverse creeds, offering a much-needed flagship for Chicago and a new marquee date on the international festival calendar.

General tickets and VIP packages are on sale now at ARCmusicfestival.com