Ah, Chicago. One of my favorite cities! The city was the birthplace of house music and it remains one of the city’s greatest gifts to the world. Throughout the years, the sound has shifted shape and style as it travels, relinquishing boundaries and connecting fans. ARC Music Festival is set to become the city’s next festival! This is a new immersive dance music event set to gather a global audience on Labor Day Weekend 2021 at Chicago’s Union Park. (Don’t forget to take our survey on safety precautions!)

House has traveled from the basement clubs of Europe to the beaches of Ibiza and Tulum, to iconic festival stages around the world. As a result, we see each setting has had its own lasting impact on the sounds born from the warehouses of the midwest. ARC will act as the energizing force by which electronic music’s vast scenes and tribes may converge for an immersive and distinctly Chicago experience, representing the home of house music that has ironically yet to be represented on the global festival circuit.

Who will be at ARC Festival?

First up, we’ve got one of the most celebrated names in the biz, Eric Prydz. He’ll take of Chi-town with all three of his projects. Wait, all three? Yep! ARC will be the first EVER event to host all three of Eric’s alias’ in a single weekend. The festival will also see the US festival debut of Cirez D along with Drumcode legend Adam Beyer. Pryda will close things out for us. Prydz’s live shows are something you have to experience for yourself. They have become some of the most respected and admired shows due to Prydz’s ability to break technical boundaries. 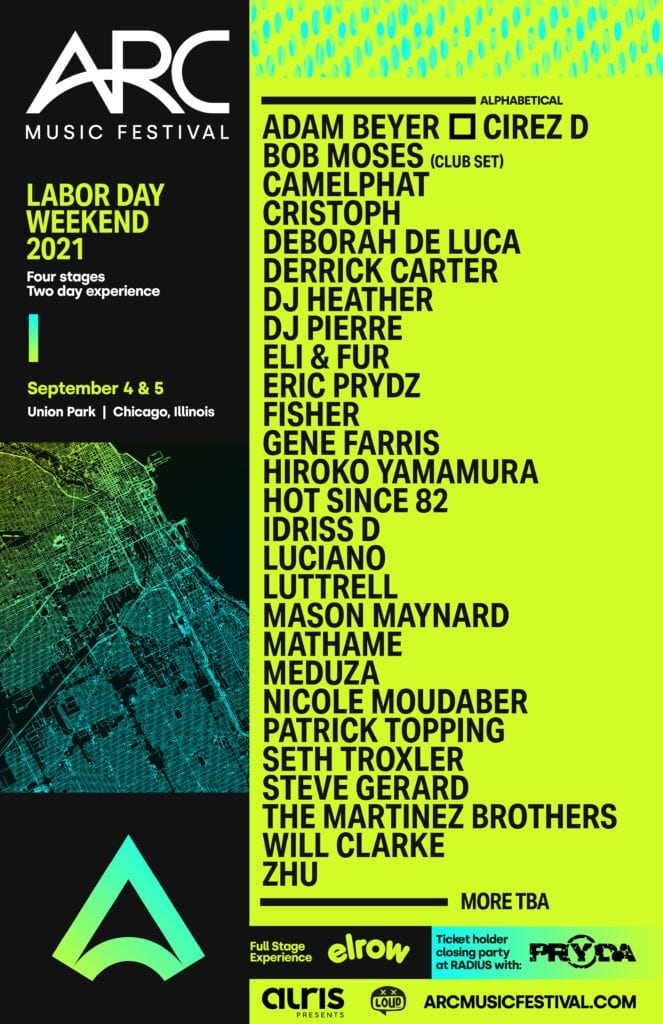 The debut festival also welcomes modern house music icons FISHER, Patrick Topping, Seth Troxler, Hot Since 82, Camelphat, Meduza, Will Clarke, Mason Maynard, and a special club set by Bob Moses, alongside the city’s own heroes Derrick Carter, Gene Farris, DJ Pierre, DJ Heather, and Hiroko Yamamura. The international techno scene will be represented by Deborah de Luca, Luciano, and Nicole Moudaber while ZHU brings his renowned multi-genre live performances to center stage in Chicago. It is this diverse programming that will come to illustrate the ARC curation, bridging genres and acting as the connective tissue between the scene’s contemporary innovators and the city’s founding members of dance.

Next up, we’ll see renowned Spanish party outfit Elrow. The brand will make its North American debut with its psychedelic production and outrageous surprises. We’ll see signature stage design, performers, and hijinx. This brand is one of the most celebrated and will host events annually in Barcelona, Ibiza, New York, London, Dubai, Miami, Las Vegas, Sydney, and many more key markets.

What Else Can We Expect?

That isn’t all though! We can expect so much more than just music at this festival! First off, ARC will extend far beyond the music, creating a cutting-edge experience that mirrors the culture and artistry of its host city. Attendees can truly expect the best! Curated production elements and art will guide the attendees between the three immersive stages. In addition, Chicago has some of the best food and you’ll find only distinctly local vendors. And we have Auris Presents and Loud Crowd to thank for this event. Collectively, the duo brings us decades of professionalism from their independent endeavors at Paradigm Presents, BAM Creates, and more. ARC fans will also be treated to intimate after-parties across Auris and ARC partner venues RADIUS and PRYSM, with others to be announced.

It is with brighter days ahead that ARC charts a path forward for dance music’s diverse creeds, offering a much-needed flagship for Chicago and a new marquee date on the international festival calendar.

General tickets are on sale with payment plans and travel packages coming soon.

(Don’t forget to take our survey on safety precautions!)

And more to be announced