Why was Abduction 2021 Canceled?

Abduction 2021 was planned as a two-stage outdoor event in downtown Orlando, FL, in a parking lot next to the Vanguard, a premier music venue that partners with Insomniac. At about 6 PM on April 10, predictable Florida rain began to fall, and then a strong squall came through. Wind blew away tents, and bar signs fell. Then, decorative light rods atop a shipping container toppled down onto a crowd taking pictures.  Finally, the Bass stage’s electricity cut out. The crowd was left wondering what would happen next. After only one great set on the main stage by Sloth, the city called it: The event was canceled due to weather. Police and security escorted everyone out past a crowded line that had been waiting more than an hour to get in. No one could believe what was happening. A few minutes after everyone was asked to leave, the crowd rushed the gates thinking the event was back on, but no such luck. (Don’t forget to take our survey about safety precautions!) 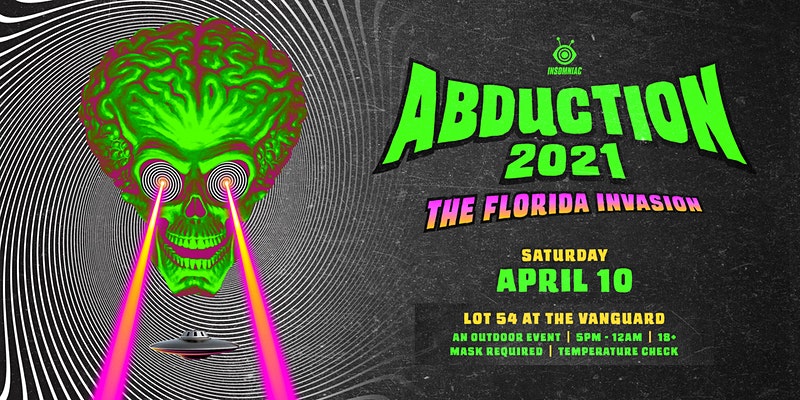 Thankfully, refunds are being issued now. The event wasn’t prepared for bad weather. As a parking lot fest, event insurance certainly would not cover someone getting hurt in a storm. But ravers did what they do best and partied on. By 7 PM downtown Orlando was saturated with the colorful crowd. Some stayed in the nearby courthouse garage until police made them leave. Others found headliners and more at McQueens, Elixir, and Stonewall, a few downtown venues that quickly switched gears to provide space for the thousands of wandering, glittered, and angry fest-goers. By nightfall, the whole city seemed a little bit alien, and the sense of community was strong even as it rained on.
The afterparty was indoors at the Vanguard and headliners were present. The best sets came from Dombresky and Tchami, who seemed to read the crowd and provided upbeat and dancey tracks to get us going. The Vanguard and Insomniac were unhappy, surely, but the party went on. All in all, it was an unexpected evening for everyone who planned on attending one of the ‘first festivals’ of 2021. Some online claimed it was a conspiracy, and that the event was never meant to happen.  A worker on site at Abduction said, “We were preparing for rain, but not the wind. I think the lightning took everyone by surprise. It was a real disappointment but no one’s fault. We were all ready for good music and good vibes.” Lightning did strike a tree in half just a few blocks from the venue, so it’s no exaggeration to say cancellation was the best option.
2021 is sure to provide a year of firsts, and perhaps Orlando’s first Rave Saturday could be the start of something new.
(Don’t forget to take our survey about safety precautions!)
Posted in Festivals and tagged Abduction, Canceled, Festival News, Florida, insomniac
← Dancefestopia in the Emerald CityARC Music Festival- Chi Town’s Next Festival →
Don’t forget to follow The Festival Voice for all of your electronic music and festival news!
Instagram: @TheFestivalVoice
Facebook: @TheFestivalVoice
Twitter: @thefestvoice
Snapchat: @thefestvoice
YouTube: TheFestivalVoice
Home » Blog » Why Was Abduction 2021 Canceled?