Twas The Night Before Hijinx

This morning, I was scrolling through Facebook when I discovered this poem. It was not written by me, it was by Shelly Ocheltree. I thought it was so great, I just had to share!! Note: This is in an Excision group so it does highlight Excision.

Twas the night before Hijinx, when all through the house 5 cats were stirring, but can’t find a mouse. The candy was made and packed with care, ready for new friends we will soon meet there.

Two headbangers were drunk and fell to their beds, while visions of the festival whomped in their heads. The drinks they will have the Tito’s and Barcardi defiantly make for one hell of a party!

When out in the yard there arose such a clatter, we crawled from our beds to see what was the matter. Away to the window we flew like a flash, tripped over a cat, we shouldn’t have dashed.

The lasers were lit on the new-fallen snow gave the luster of rainbows to objects below, when what to our bloodshot eyes should appear, but a Giant T Rex and eight DJs with gear.

There he was so lively and quick, and we didn’t have a camera to take a pic. More rapid than eagles, his coursers they came, and he whistled and shouted and called them by name:

As ravers appeared one by one, We knew we were in for an amazing night of fun, Mosh pit and dancers were all around, hope we don’t have to search for our buddies at the lost and found. Friends to be made, candy to trade, Necks to break, rails to bend we all hope this night will not end.

And then, in a twinkling, we heard on the roof a growl and snarl and sound of a hoof. As I drew in my head and spun around, Excision came with a giant bound! 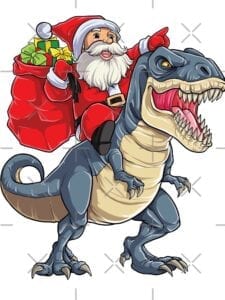 He was dressed in his merch, from his head to his toe, his clothes looked fire and his new logos they glowed. A bag of Water he strapped to his back, and he looked like a peddler just opening his pack. Oh his eyes–how they twinkled, his dimples, how merry! And his cheeks were like roses, his nose like a cherry! His droll little mouth was drawn up like a bow, and the beard on his chin was perfection you know. He gave us a smile with those beautiful teeth, and a cloud of smoke it encircled his head like a wreath. He had a broad face and certainly no tummy, up on that stage he looks so yummy !

There he was Jeff Abel himself, and we were in awe when we saw him, in spite of ourself. A wink of his eye and a twist of his head soon gave me to know I had nothing to dread.

He spoke not a word, but went straight to his set, I looked and my rave bae and said aight, bet !!! He filled the stage with visuals and bass, oh how his music melted our face!

The stage went dark the night got chilly, he thanked Jersey for the fun and said “See you in Philly”.

He sprang to his Rex, to his team gave a whistle, And away they all flew like the down of a thistle. But we heard him exclaim, as he rode out of sight, “Throw your X up and I will see you all Saturday night!