This is history in the making, guys. The renowned British artist Aluna has announced a new experience in partnership with leading technology company Pollen Presents. The event itself will take place May 27-30, 2022 in New Orleans, Aluna’s Noir Fever will bring together a diverse group of artists to celebrate the Black and LGTBQ+ origins of dance music in a city renowned for Black and brown musical excellence. This is awesome news!

This will be a once-in-a-lifetime experience. First off, you’ll get to take part in some insane warehouse parties and raves. There are also tons of keynote talks, workshops, a marketplace for innovative Black-owned brands, and much more to be announced.

Who Is On This Lineup?? 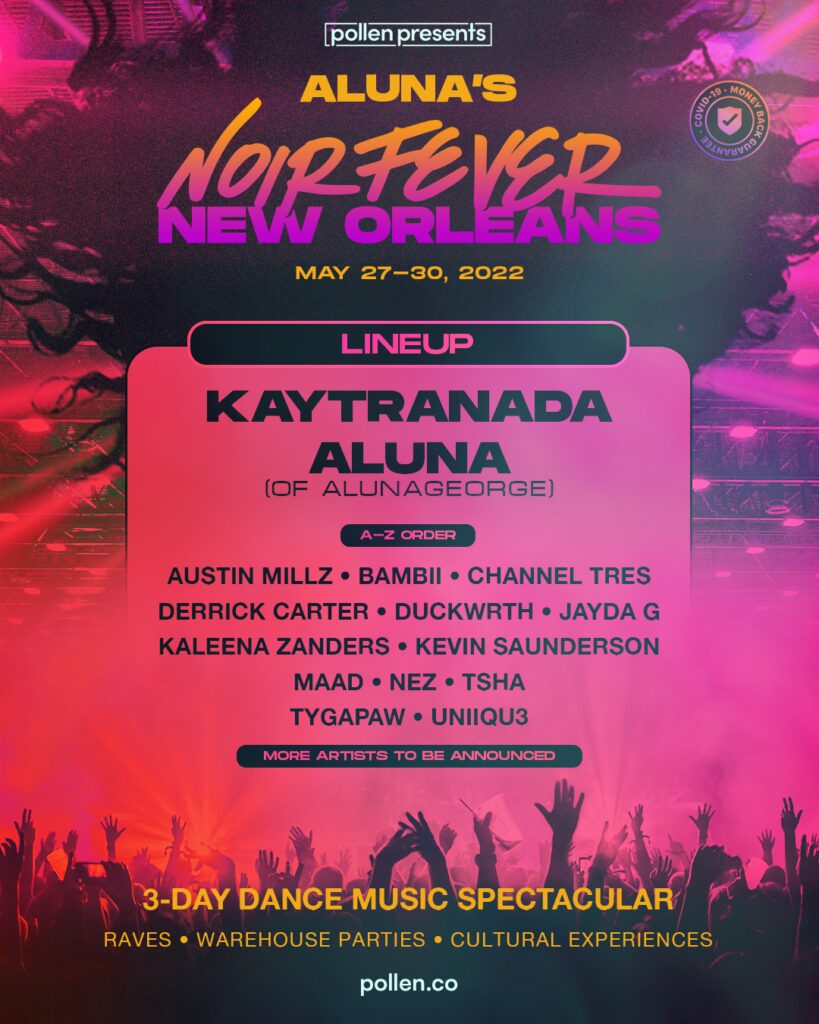 There are tons of other great names on this lineup as well. Additional artists on the lineup include South Los Angeles rapper and songwriter Duckwrth, the acclaimed Harlem beatmaker Austin Millz, Chicago producer and vocalist known for high-profile collaborations in the hip-hop and dance world NEZ, self-proclaimed Jersey club queen UNIIQU3, one of dance music’s favorite vocalists Kaleena Zanders, East Coast singer, songwriter, DJ, and model MAAD, Toronto DJ and producer Bambii, the Jamaican-born New York-based artist Tygapaw, and more to be added ahead of the experience.

For Aluna, this experience is a chance to educate people on the culture and music she loves.

Back in the day, she was one half of the beloved duo AlunaGeorge. Now, she has now gained attention as a solo artist while releasing her debut album Renaissance on Diplo’s Mad Decent and more recently a batch of catchy collaborations with Austin Millz and Tekno. In addition, she is also the host of her own radio show on SiriusXM called Noir Fever, a stronghold for her curatorial excellence and a platform for both rising and established artists.

This announcement follows Aluna making headlines after releasing an open letter to the dance music industry after calling out the lack of Black representation, while also recently highlighting the fact that no Black woman has ever been nominated for best dance/electronic album at the Grammys. “When I started looking at all the challenges I face being a Black woman making dance music, I realized I wanted to do more than just create a space for myself – I want all Black people to know that the genre of Dance is their heritage and they should feel included and encouraged to create under that banner by expanding the genre to be culturally and racially inclusive,” Aluna shared in her letter.

The full statement from Aluna can be found here. This isn’t all for Aluna though. She also continues to work with major event and festival promoters to ensure more diverse lineups are being booked, and the all-Black lineup for Noir Fever New Orleans is based around this goal.

Speaking on Noir Fever New Orleans, Aluna states that “This unique experience of honoring dance music’s heritage and getting a taste of what’s to come will reignite a much-needed connection back to what dance music is about – creating a place where people from all different communities can come together and dance their hearts out while feeling free to be themselves.”

For more information about the experience, including lineup, pricing, payment plans and FAQs, visit pollen.co.