There’s a BRAND NEW festival on the block for those of you ready for a grand time! Roxborough-bred singer/songwriter Dave Hause introduces a new music festival, Sing Us Home, to Manayunk’s Venice Island for two days this spring on Friday, May 5 and Saturday, May 6. The festival will coincide with the release of Hause’s forthcoming album, Drive It Like It’s Stolen, and will feature a unique show from Hause, Kathleen Edwards and Craig Finn (The Hold Steady), along with performances by Hause and his band, The Mermaid, Alt-Country rockers Drive-By Truckers, Tim Hause, Lydia Loveless, Crossed Keys, The Tisburys, Ocean Ave Stompers, and Philadelphia Ska-favorites Catbite. Tickets go on-sale to the general public Friday, January 27 at 10 a.m. 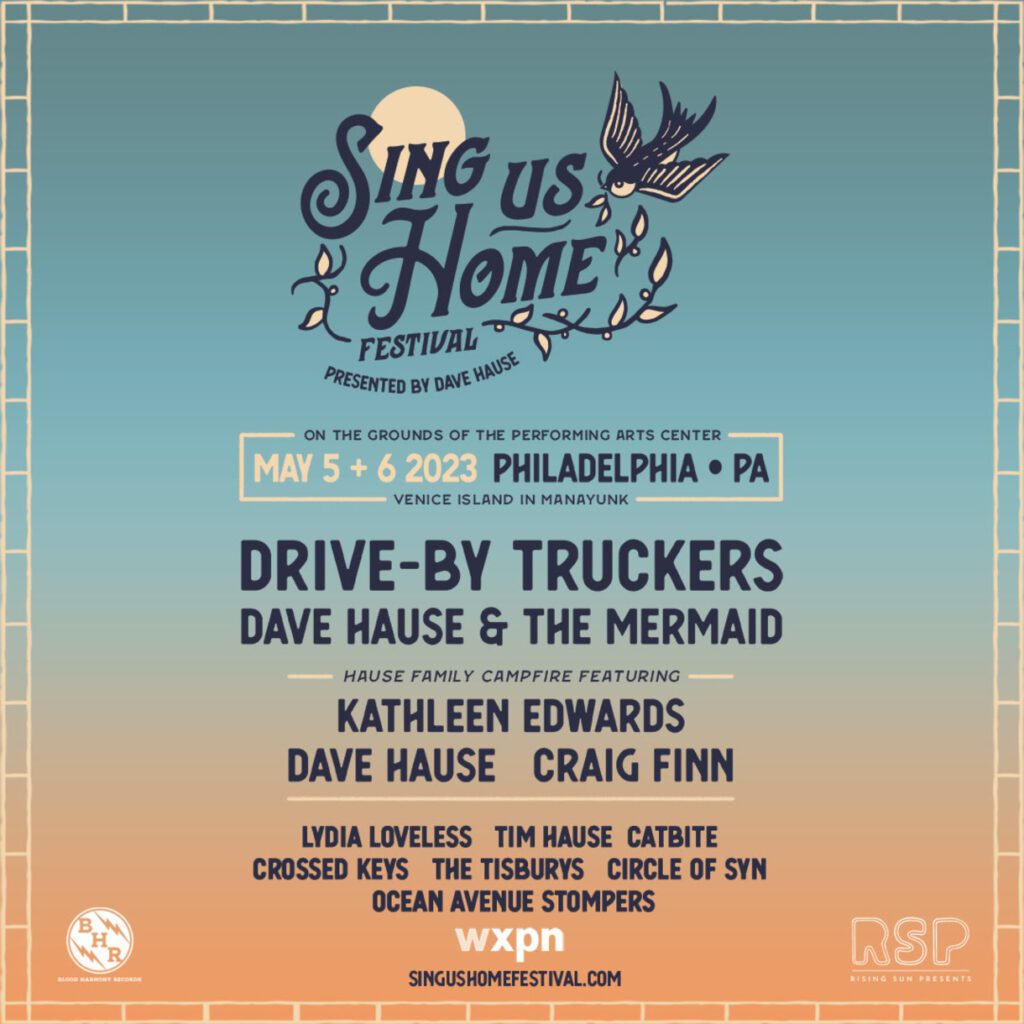 Sing Us Home will be co-produced by Rising Sun Presents, the team behind a number of Philadelphia-area venues. For example, this includes Ardmore Music Hall, and local outdoor festivals and events like the Wayne Music Festival and King of Prussia’s Concerts Under the Stars. It will feature local food trucks, craft beer and bar offerings as well as VIP ticketing and parking options. Rising Sun’s senior talent buyer Jesse Lundy says: “RSP is proud to be working with Dave and his team to bring music and festivities to his hometown!”

If you’re a fan of punk, you’ll be a fan of this festival! In addition to his work with late-‘90s/early-‘00s punk bands, most notably The Loved Ones and supergroup The Falcon (featuring members of The Lawrence Arms and Alkaline Trio), Dave Hause has released six studio albums, both solo and alongside his band, The Mermaid. Reviewing his 2021 album, Blood Harmony, SPIN described it as “[maybe] his best” and “most ambitious album to date … a catchy slice of Americana sound that would make the Gin Blossoms envious with the poetic lyrics and imagery people have come to expect from Hause.” Throughout his years of recording, Hause has collaborated with members of The E Street Band, Jason Isbell’s 400 Unit, My Morning Jacket and most recently singer/songwriter Will Hoge, who produced Blood Harmony and Drive It Like It’s Stolen.

In a letter to his fans about the festival, Hause writes: “For the first time in my career, I get to bring my favorite bands, songwriters, food, and friends to my old neighborhood and share it with all of you. We are going to mix local Philadelphia food, working class wit, California vibes, acoustic music, punk rock, the Mummers, craft beer, tattoos, art, storytelling and good old fashioned fun to present a rock and roll weekend that WE would want to attend.”

Ready for the lineup?? Sing Us Home’s headlining act, Drive-By Truckers, have become a Rock ‘n’ Roll institution over the course of their twenty five-year career. Pitchfork has called them “the most poetic and insightful Southern rockers in existence” and Rolling Stone describes them as one of America’s “most vital bands.” They, along with many of the other participating acts including Hause himself, have performed at festivals and events hosted by Philadelphia’s WXPN, who will welcome the two-day festival. More info, including ticket options, can be found at singushomefestival.com.

Posted in Festivals and tagged Catbite, Circle of Syn, Craig Finn, Crossed Keys, Dave Hause, Drive-By Truckers, Kathleen Edwards, Lydia Loveless, Ocean Avenue Stompers, Sing Us Home, The Mermaid, The Tisburys, Tim Hause
← The Lineup For Beyond Wonderland Is HERE
Don’t forget to follow The Festival Voice for all of your electronic music and festival news!
Instagram: @TheFestivalVoice
Facebook: @TheFestivalVoice
Twitter: @thefestvoice
Snapchat: @thefestvoice
YouTube: TheFestivalVoice
Home » Blog » Announcing Sing Us Home!
We use cookies to ensure that we give you the best experience on our website. If you continue to use this site we will assume that you are happy with us eating these cookies.OkLearn more