Ready for a stacked on stacked on stacked lineup for Beyond Wonderland??? It’s been cooking up for some time, and let me tell you, Beyond Wonderland at The Gorge is cementing its place as one of Insomniac’s premier festivals! This is the third year at the picturesque George, Washington venue. And now, the two-day festival is set to welcome back Headliners on Saturday, June 17th and Sunday, June 18th, with renowned DJ/production pair Kx5 performing for the first time in the region. Two-day GA, GA+, and VIP tickets are on sale this Friday, January 27 at 12 p.m. PT at PNW.BeyondWonderland.com.

Does anyone love Alice in Wonderland? We sure do! The festival is delving into the psychedelic storybook headfirst. It will be a beautiful time that includes a litany of imaginatively curious characters, including The Mad Hatter, The Queen, and other various costumed performers. Add in some premium food and beverage offerings, on-site camping options, stellar talent, and an unforgettable ambiance, the trippy multi-day event truly takes one down the rabbit hole in full force. Plus, the new main stage design will be making its exciting debut this year, dubbed The Queen’s Valley. This will be the largest production that has ever been on display at The Gorge, and is paired alongside stages like the Bassrush-hosted Cheshire Woods and the Insomniac Records-hosted Caterpillar’s Garden. It’s going to be INSANE! 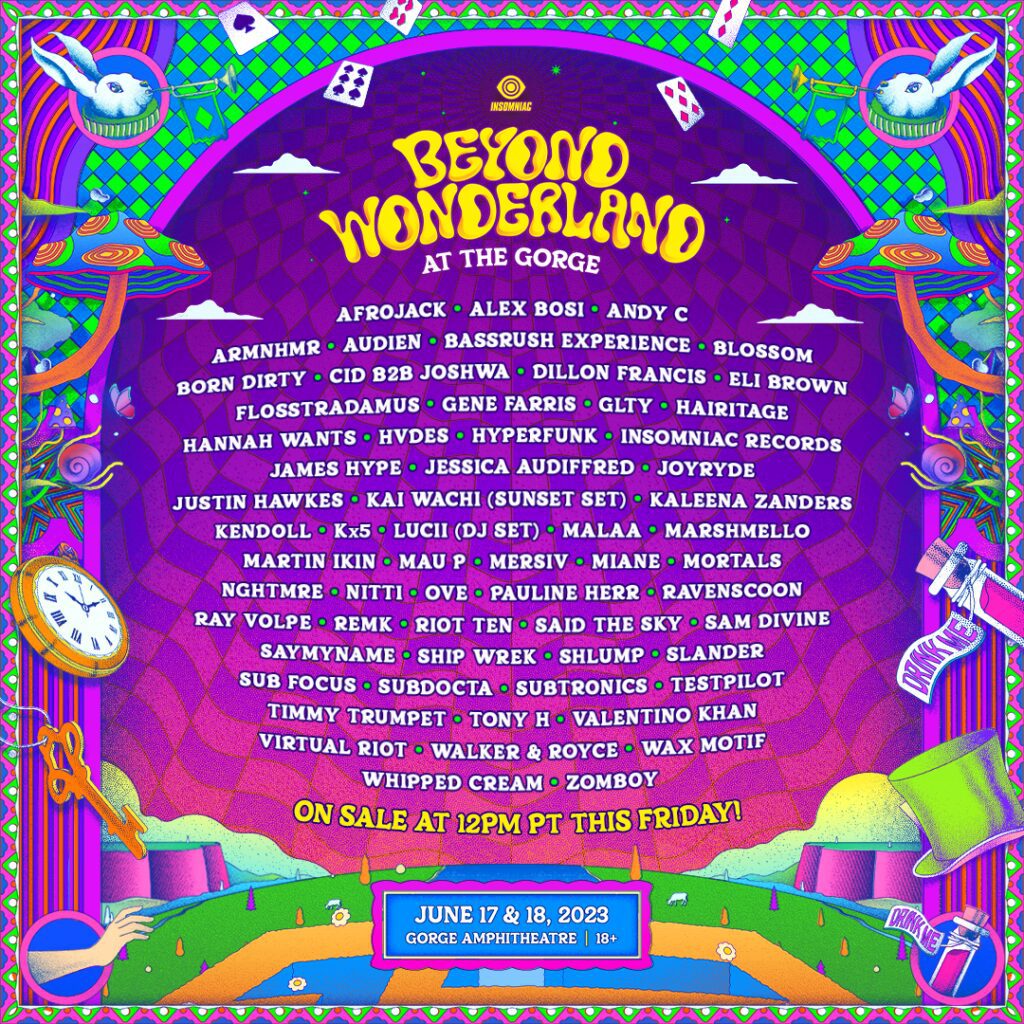 Also just announced, Beyond Wonderland at The Gorge has partnered with Vibee to offer luxury packages at the premium Sagecliffe Resort and Spa, steps from the festival grounds. Take in breathtaking views of The Gorge with a luxury stay for groups up to six, including fine dining, private trails and a heated outdoor pool. Sounds like a plan!!!

The exclusive packages include festival ticket(s), a 3-night stay at Sagecliffe Resort and Spa, private gate access to the festival, golf cart transport on property, plus expedited entry to Friday Camping Pre Party and Silent Discos throughout the weekend.

GA, GA+, and VIP tickets for Beyond Wonderland at The Gorge 2023 are on sale this Friday, January 27 at 12 p.m. PT at PNW.BeyondWonderland.com.