It is almost the weekend Sacramento! The city of trees is getting ready for an epic time at Sol Blume. If you are heading over to Discovery Park this weekend for the one-of-a-kind R&B festival, I have rounded up a list of artists you do not want to miss on this lineup. 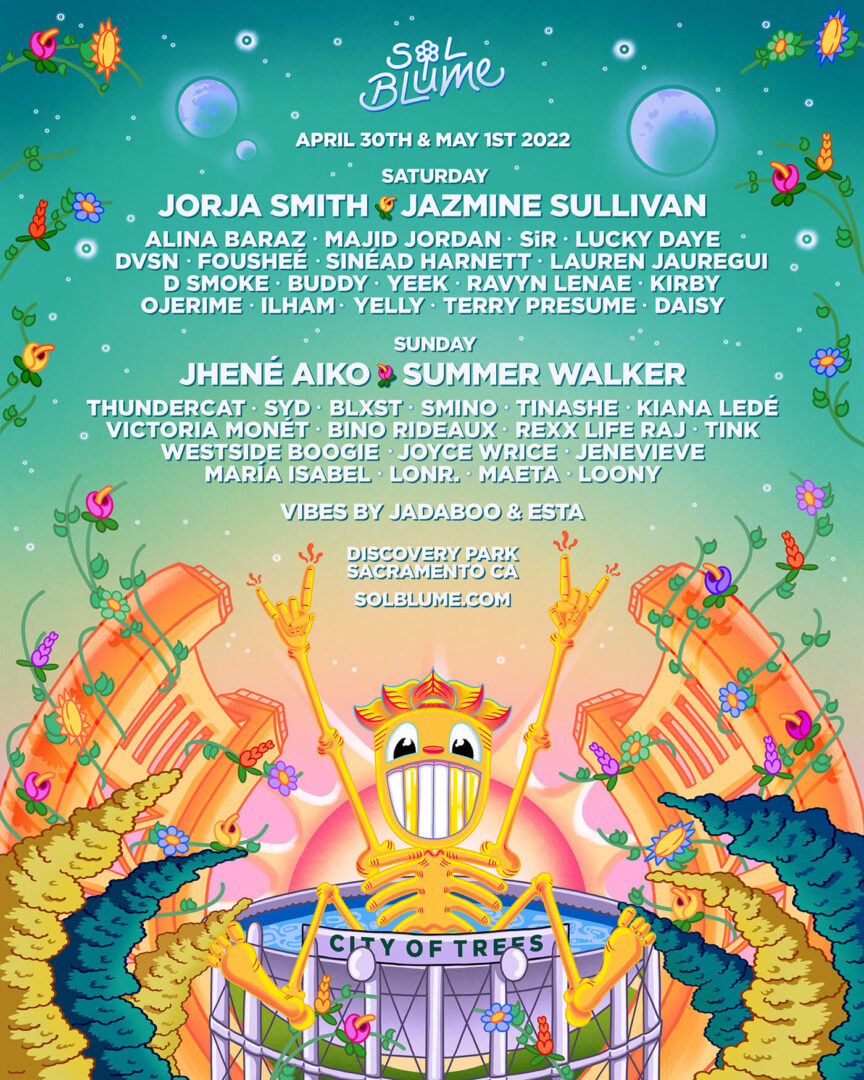 I want to focus on some of the smaller artists but it’s important to note that one of the top billing acts is no longer performing this weekend. Unfortunately, Party Next Door will not be headlining the festival due to unforeseen circumstances, but Sol Blume did not disappoint with a replacement. They have added Jazmine Sullivan into the mix which now makes Sol Blume an all-female headlined festival (#girlpower #welovetoseeit). She will be headlining alongside Jorja Smith, Jhene Aiko, and Summer Walker.
Let’s get into it starting with another badass female on the lineup, Alina Baraz. I have been listening to her music for as long as I can remember and I am just obsessed with her peaceful, melodic voice paired with an earthy produced bedroom sound. ‘Fantasy’ might be one of my favorite songs from this past decade, it is so smooth but bouncy at the same time. I have seen her live a couple of times before and she sounds just as majestic in real life as she does on her tracks. She definitely puts on a show and I can’t wait to see her again.
I’m excited to see Syd because she just released her new album ‘Broken Hearts Club’ earlier this month and I’ve already listened to it front to back. The whole album is so beautiful, relatable, and well done. Syd has some amazing features on the album including the bay area’s queen, Kehlani, as well as Lucky Daye and Smino who are both on the lineup. Maybe we will get a duet from one of the pairs live on stage for the first time from the new album.
D Smoke is one of the few rappers to appear at Sol Blume all the way from Inglewood, California. You might recognize his name from the hit Netflix competition show, Rhythm and Flow. It was a hip-hop talent search hosted by Cardi B, T.I., and Chance the Rapper. D Smoke went all the way winning the competition in 2019 and the respect of many rappers in the industry. I was rooting for him to win the whole time and he has come so far since then so I’m hyped to see what he brings in person.
Speaking of D Smoke, we have family ties on the lineup. Singer SiR (signed to Kendrick Lamar’s Top Dawg Entertainment) is D Smoke’s brother and will also be performing this weekend. Now, this is crazy to me because I recently learned this, I knew they were both from Inglewood but never knew they were related. I fell in love with SiR when I heard ‘November’ back in 2018. That is a talented family of musicians and I know their Mom is so proud (by the way, she used to sing back up for Tina Turner).
My last but not least round-up for the weekend is DVSN. They are a strong and mysterious duo coming out of Toronto, Canada. I might be a little biased on this one because I’m a huge Drake fan and he kind of put them on by introducing their tracks on OVO sound and eventually signing them. But nonetheless, they have an incredible sound and vibe that is so unique and leaves you wanting more. Nobody can quite do what they do as a unit and that’s what makes them special.
Wherever the festival takes you this weekend, you are in for a treat. The entire lineup is stacked with beautiful voices and multifaceted artists. You can’t go wrong whether you’re at the Bless Stage or Blume Stage. For more information, tips on getting to the venue, amenities offered, frequently asked questions, or last minute tickets, head to solblume.com
Posted in Festivals and tagged Alina Baraz, Cardi B, Chance the Rapper, D Smoke, dvsn, Girl Power, Jazmine Sullivan, jhene aiko, Jorja Smith, kehlani, Kendrick Lamar, Lucky Daye, Party Next Door, Singer SiR, smino, Sol Blume, Summer Walker, Syd, t. I, Tina turner
← Bonnaroo Artist of the Day #80 – ROLE MODELLast Call for Hangout Music Festival →
Don’t forget to follow The Festival Voice for all of your electronic music and festival news!
Instagram: @TheFestivalVoice
Facebook: @TheFestivalVoice
Twitter: @thefestvoice
Snapchat: @thefestvoice
YouTube: TheFestivalVoice
Home » Blog » Artists You Don’t Want To Miss At Sol Blume