Bicycle Day Is A World Of Its Own

I was fortunate enough to be the staff writer to cover this event by a miracle after “ABunDance Bicycle Day in LA” sold out “The Mayan” which is a venue I also had not had the pleasure of attending before. After finding street parking in the Downtown LA area(due to my extremely tight budget at the time) rather than parking at the venue, which contains plenty of low-cost and safe options I was able to gain entry and begin my exploration of a world within this foreign venue that truly blew my mind beyond expectations. 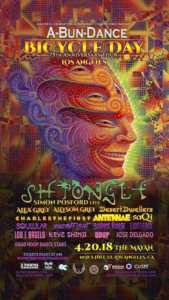 My first experience at “The Mayan” theater was one for the books, immediately upon walking in the main hall had an array of tables set up with information on harm reduction with one having an emphasis on psychedelic substances and the benefits it can provide with proper usage. With a constantly evolving society, we are seeing the shift in societal views on psychedelic culture and the ways it can invoke creativity in the users. Seeing vendors providing unbiased facts on some of these substances from Mushrooms, LSD, and Ayahuasca with informative pamphlets on dangers as well as the potential benefits shows that what was once viewed as “taboo” could have some potential for brain development and spiritual healing. 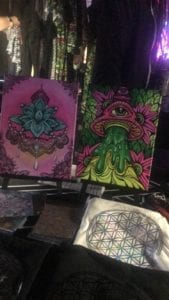 Past works from the live artists

Some of the artists in their works alone you can see some similarities from their take on the psychedelic experience, literally anywhere you looked seemed to have some type of eye stimulation from paintings, to UV reactive writing, to paper crafted decorations and much more. 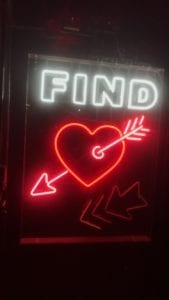 Going into this event I didn’t expect this extreme level of thought into the production and truly was impressed by the “Grateful Generation” and “Euphonic Conceptions” for having more detail in their one-night event in comparison to some of the massive music festivals where tickets cost a small fortune!

Spirituality With The Greys

Although I was excited initially due to Shpongle being the headlining artist for the event, once I heard Alex Grey and his wife Allyson Grey were doing both a presentation as well as a new original piece live the inner fangirl in me screamed ecstatically. For those who are unfamiliar with the Greys, their works of art are truly intellectually and spiritually inspiring. For some lucky attendees there was a meet and greet option which included a poster, a meal, early entry, as well as a one on one encounter with the Greys. 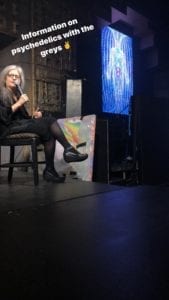 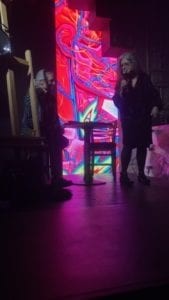 One of the shared visions the Greys have is a temple known as Entheon where they hope to inspire spirituality through the large collection of art that will be stored here. During the presentation they had explained that they wished to inspire a new generation with art and love in a sacred space free of judgement which was an idea they had manifested during an MDMA experience in their earlier years during college before the criminalization of the substance during the “War on Drugs” years in the United States. 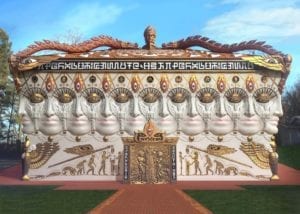 Simon Posford makes up one half of Shpongle alongside Raja Ram, for the stop in Los Angeles we had the pleasure of Simon Posford djing, the Greys working on a brand new art piece, and dancers in exotic outfits to complement the intense visual overload from the many performers and their artworks. 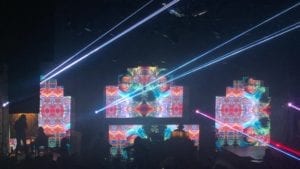 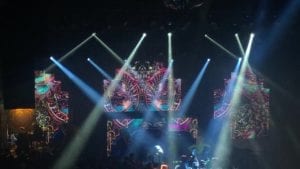 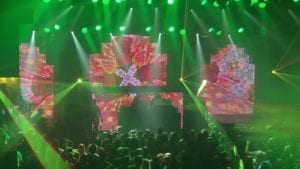 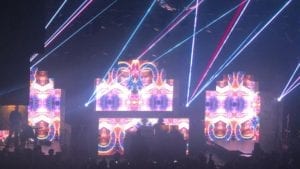 One of the most unique aspects of Shpongle is the incorporation of vocal samples from pro psychedelic influencers like Terence McKenna in some of their songs while also experimenting with audio frequencies which can induce a psychedelic like effect on listeners naturally; in other words their music can to a degree alter your mind as if under the influence of a psychedelic substance. 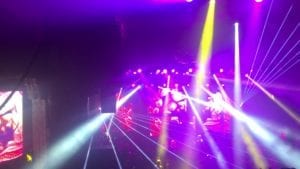 It is difficult to say any specific part of the night was my favorite aspect of the evening since all the performers truly stole the show. I was definitely inspired both creatively, spiritually, and emotionally from the lecture given by the Greys. I was impressed and in awe at the various vendors and their one of a kind items in addition to the other live art performers who were equally impressive skill wise to the famous Greys. Lastly, the set by Shpongle in addition to the visuals presented on screen as well as the lasers.

For those who are interested in experiencing Shpongle live Sonic Bloom is one of the festivals on their tour list. 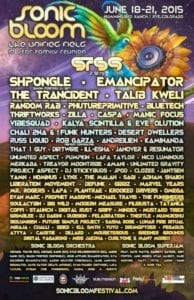 Posted in Festivals and tagged Alex Grey, Allyson Grey, Live Art, Mayan, Shpongle
← Exploring Bonnaroo’s 2018 LineupTampa Beat Weekend Returns June 1st, 2018! →
Don’t forget to follow The Festival Voice for all of your electronic music and festival news!
Instagram: @TheFestivalVoice
Facebook: @TheFestivalVoice
Twitter: @thefestvoice
Snapchat: @thefestvoice
YouTube: TheFestivalVoice
We use cookies to ensure that we give you the best experience on our website. If you continue to use this site we will assume that you are happy with us eating these cookies.OkLearn more