We Are The Movement, There Are Powers In Numbers 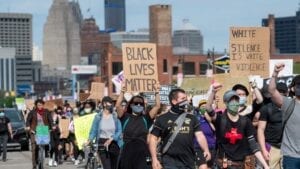 In light of recent events, The Festival Voice will not remain silent. With our platform we hope to spread awareness and provide resources so you can do everything you can to help support Black Lives Matter. The time has come where the people in this country will no longer be silenced, we have a voice and we will speak up.

Being from Detroit and attending the protests, I would like to share my experience. We have had protests everyday starting Friday, May 29th, and they’ve continued since. Starting at 4pm everyday in front of the Detroit Police Department we started with hundreds and on day 4, we’ve reached thousands. We’re holding signs, we’re chanting, and we’re doing it so peacefully. The protests begin with speakers sharing their stories, experiences, and spreading awareness on the current situation. The entire protest has been lead by Detroit native, Tristan Taylor – check him out HERE. 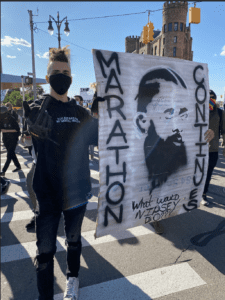 Once the speakers are done, the mass begins to march around the city chanting ‘I Can’t Breathe’, ‘Say His Name; George Floyd’, ‘Black Lives Matter’ and ‘Fuck these racist ass police’. Marching for miles and holding signs, gaining the support of those in their cars or people shouting from their windows. Others will come and stand on the side with waters, masks, snacks, and gloves to support the protestors.

I can’t speak for what happened on Friday night in Detroit but I can say that many were arrested and tear gas was employed by the cops without being driven to do so. On Saturday, tons of arrests were made for people standing on the side of the road holding signs. Cops began tackling innocent protestors, shooting rubber bullets at them, and zip tying them up before shoving them onto a city bus that drove them ‘downtown’. A friend from the incident mentioned that, ‘People in the bus were bleeding, crying, and shitting themselves because they were so scared’.

On Sunday, May 31st, I joined the protests again – not ready for what I was about to endure. A friend and I met up with the march and we marched around the city holding signs and chanting. We made our way back to the police station at around 7pm and more speakers were sharing their stories. At about 7:40 pm the police began lining up with riot shields and gas masks as we began to kneel, chanting, ‘Hands Up; Don’t Shoot’. 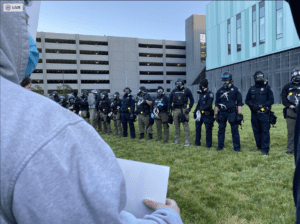 At 8:20pm the Chief Of Police announced a city wide curfew of 8pm, and those still on the streets would be assaulted and arrested. Soon after that, we hear gun shots and see tear gas from the end of the police line. Someone yelled ‘run’ and we went as fast as we could. Police cars begin separating us as grenades are being thrown to scare us. We continue to chant and walk through the streets and some cars are even surrounding groups of people to protect us from the cops. At this point, we see people getting gassed and arrested when they’ve been separated from their friends.

The cops had every entrance and exit of the city surrounded, ready to make arrests and tackle anyone on foot. We tried to go home but cops threatened to detain us if we went any further. Ultimately, we walked over a highway bridge and made it to safety.

From all of this I’ve seen first hand experience of police brutality. Arresting people without being aggravated to do so. For being on a power trip and not understanding the movement. Luckily, it will become bigger. We have a voice and we are not afraid to use it. We will continue to fight, we will continue to make a difference. Progress is coming. 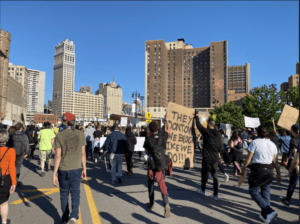 The Festival Voice supports this movement and multiple writers/editors/staff have continued support on their personal platforms. We will use this platform for good and we will not back down. We will not forget the lives we’ve lost. Below I will list some links to support this movement. Thank you.

#JUSTICEFORBRE: https://act.colorofchange.org/sign/justiceforbre-breonna-taylor-officers-fired?source=coc_main_website (includes the option to film a 30 second video)

STREAM TO DONATE: https://youtu.be/bCgLa25fDHM (if you do not have the opportunity to donate! sit through and do not skip the ads)

FOR THE PEOPLE WHO LIVE INTERNATIONALLY!

(courtesy of @gylIlenhaal on twt)

I am contacting you regarding the incident that occurred at 100 High Park Avenue on May 27th, 2020. I am a concerned Canadian citizen who would like to express my anger and concern over the death of 29 year old Regis Korchinski-Paquet. She has died after allegedly falling off her balcony, despite police being present. As a concerned citizen, I am very upset and disturbed at the events that took place and the allegations that this was caused on the part of the police. I want justice for her death and I demand answers. As a citizen, I demand for the “transparency and accountability” as well as the “disclosure of as much information as possible to the public” that have on all accounts been specified on the SIU webpage. Charges need to be brought to all the officers involved, and all information and evidence should be made available to the public.

TO STAY INFORMED AND EDUCATED!!

A great resource to learn about black activism