The World Opening Up

As the world starts to reopen, we as a community have to often think about the health and respect of others. When things such as coronavirus hit and the world turn into absolute chaos, it always boils down to “when can we go back to concerts and other large gatherings? Although America is going through one of the most significant movements with Black Lives Matter and protests, rioters and looters fill the streets. It’s almost as if people are putting aside social distancing to stand for this great cause. Yes, some are adhering to guidelines, but some can’t seem to get away as our brothers and sisters fill the streets. I agree with protests as I was a part of a small peaceful protest in Radford, VA. I socially distanced and wore a mask and still adhered to guidelines, even though it was a tiny gathering, I always felt uneasy about the pandemic we are still facing. Where I come from (a small town outside of Virginia Tech), not as many people were affected as, let’s say, New Orleans. That alone makes it hard to remember you’re amid a pandemic until you go to a grocery store. To Bonnaroo or not to?

Yet here we are, and the questions still lay…can we go back to festival season? I have no real answer for you, and I have no real explanation for myself honestly. So I decided to take it to Facebook. Of course, we had a tremendous genuine response, some sad and some possibly handy. I had some trolls and some even trying to parent me. As if I’ve yet made up my mind to go back. These are just some things that people had to say about the festival season and Bonnaroo returning in September; they are from the group Bonnaroo: A Loophole To Reality.

You’ll Be There In Spirit

Alaina Holst, “I probably won’t go, unfortunately. It’s not worth it to accidentally catch the virus and be asymptomatically spreading it to family and friends once I get back. Things are just way too scary right now. I probably won’t ask for a refund, and instead, hopefully, my ticket for next year is covered.”

Blake Daniels, “No. It doesn’t matter how healthy I am. It matters how a disease like this spreads through healthy people. Putting that many “healthy” people together is already a bad idea, but we’re generally ok with it because of the positives.
In this time, with what’s currently happening, it’s absurd that anyone considers something like this a good idea. When the virus is ERADICATED, there are no new cases in 3 weeks in the country, so maybe I could be convinced that going is safe again. ”

Ryan Spahr, “I can’t possibly justify going. There is no cure, let alone vaccine, and you must look at the bigger picture folks even more importantly.If you get this, especially at a festival, how many lives will you end up impacting? Sure maybe you are young and spry, get cold-like symptoms. But chances are someone you come in contact with gets it WAAAAYYY worse. I’m in Seattle. One person spread it to 52 people in their church choir practice. And that was with 6ft distancing rules intact. Think about that for a minute. People in the church are fully clothed, taking precautions, and set chairs 6ft apart. One person of 60 has the virus. At the end of the 2hr choir practice, 52 of 60 have it. Two died. I love Bonnaroo. I make the trek from Seattle, but there is just too much uncertainty.”

Kayla Marie Brookshire, “I don’t think it’s a good idea to be gathered in that large of a crowd yet. It sucks to miss Roo, but I’d rather not die or kill someone else from carrying the virus.”

Amber Kaylee Piasecki “If it happens, I plan on going. I, my fiancé, best friend, and her date will be there. Me and my fiancé work in healthcare and are seeing it first hand. They aren’t testing people with symptoms and having them quarantine, so, if we had any, we would stay home. And I advise anyone else that does to do the same. However, there would be no way for them to social distance this festival, and not everybody would adhere to that even if they could. I love to think it’s going to happen still, and I’m staying positive.”

Tyler Farrah “I love Roo, and honestly I could use some of that amazingly awesome beautiful loving caring roo energy so if Septemberoo happens I’ll be there with a huge smile and high fives for days

Meredith Ramella “I will be there if it happens. I work on a college campus, and if they intend to have students back in the classroom and college football (I live in a huge football town), then I will already be exposed to many people just for my job. I’ll be damned if I ain’t going to go to the one weekend of the year that I look forward to it. I will be wearing a mask and taking all precautionary measures as well. See you on the farm!”

Cassie Peterinelli “If I could go to Bonnaroo, I would quarantine immediately after for as long as necessary. I’d follow as many rules as needed, and I just want to make it back home this year; my choice to attend Bonnaroo wouldn’t affect ANYONE. I’d be reasonable about it— as anyone else who attends should plan to be!”

Jenny Mc “Now that testing is more readily available, I’d be going and testing myself upon my return home followed by a week self quarantined and another test before I come in contact with anyone… I consider myself low risk, and I live alone, so I don’t feel it would be irresponsible of me personally.”

Great Ideas That May Be Helpful

Valerie Christene Williams, “I would love to go if it still happens. I think I’d feel safer at an outdoor festival than a Walmart or a gym or something. I understand that large crowds can form at stages, but other than that, I feel like it’s pretty safe. There’s a lot of space to walk around and keep a distance from other people. Maybe just no high fives?? I’m willing to give that up. They could even put a COVID testing booth in the fest.”

We had some fantastic feedback and great answers! I can’t tell anyone to go or not to head out to Bonnaroo this year, as I am unsure of myself. If things start looking up for the world, I’ll see you know? Until then, I hope everyone stays safe, follows guidelines, and prays for the best. I don’t know if I’ll see everyone on the farm this year, but if I do choose to go, I can’t wait to be back in your loving arms at my home away from home come September. 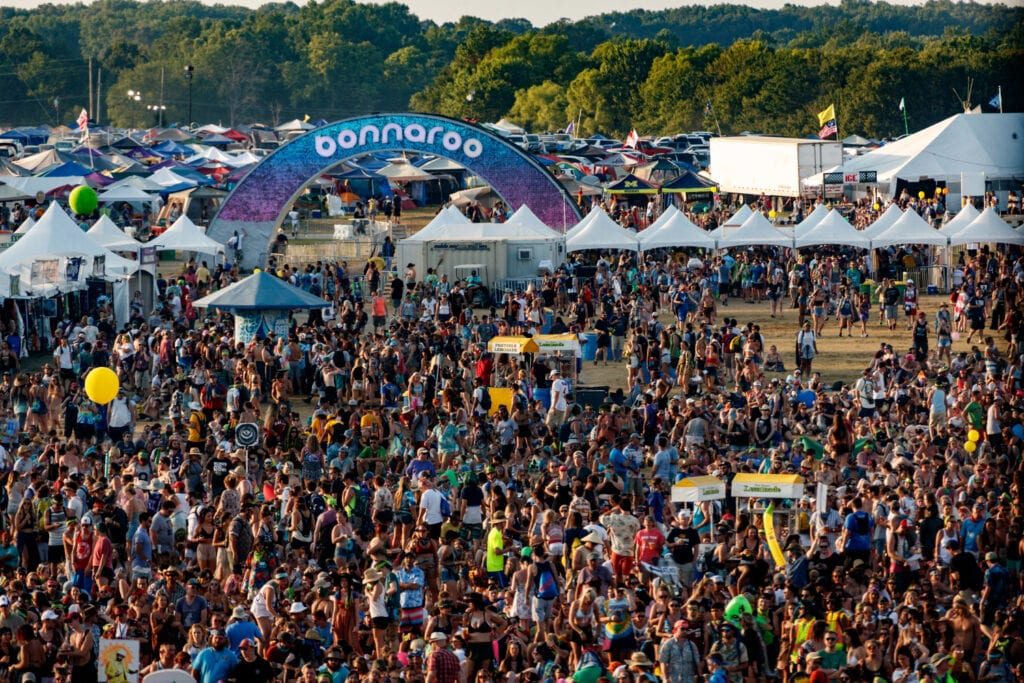 MANCHESTER, TN – JUNE 11: The Bonnaroo Arch, crowd and atmosphere during the Bonnaroo Music and Arts Festival 2017 on June 11, 2017 in Manchester, Tennessee. (Photo by Douglas Mason/Getty Images)

Check Out Bonnaroo: A Loophole To Reality Here.