Personally, I’ve never been to North Coast but I do frequent Chicago a lot. I enjoy going to a ton of shows in this area and I’m excited to be covering North Coast! The festival is coming up really fast- this Labor Day Weekend! The festival takes place at the Seatgeek Stadium, located in Chicago. I don’t know about you but I’m ready for a great weekend, so bring it on North Coast!

North Coast has an amazing lineup that gives me chills when I think about it! I haven’t seen Armin Van Buuren play since… EDC 2016? Maybe even 2015 so I am hyped to see him. My buddy is a huge Porter (and Madeon fan), so I know we’ll be checking that out. And that Seven Lions Ophelia takeover sounds INSANE! Everyone on that takeover is going to kill it! I’m also interested in seeing Svdden Death’s Voyd, because I haven’t had a chance to catch that set yet. Mersiv killed it at Summer Camp, so I know his set will be awesome as well. Looking forward to Dirt Monkey b2b Subdocta because that set is going to be sick! There’s so many great artists to see! 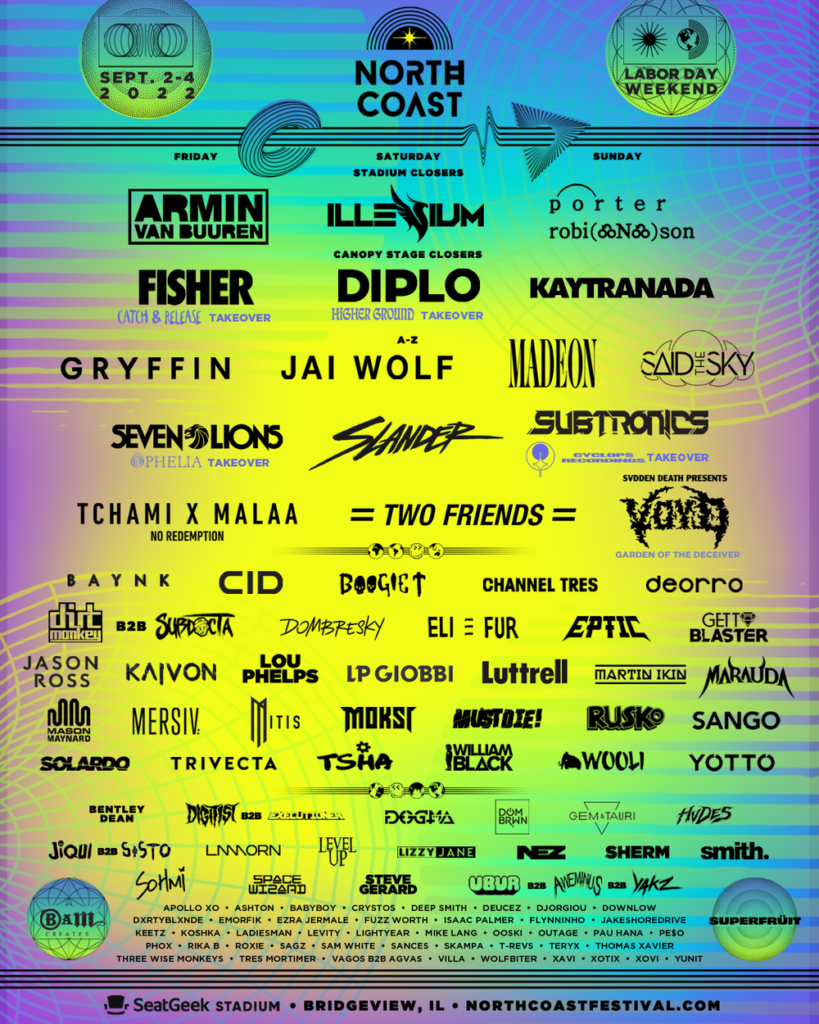 Start thinking about how you’re going to get to North Coast! You can always drive there or you have the option to take the official shuttles as well. You can buy a parking pass or you can shuttle yourself directly there! You can also try riding the official PACE bus in Chicago (but that is honestly a hassle), but you have to walk another 20 minutes or so to get there, so plan accordingly! Once you are in, plan to be there the whole night!

This is going to be a fantastic weekend and I’m looking forward to it. Grab those tickets for North Coast now!

Posted in Festivals and tagged Armin Van Buuren, Chicago, Dirt Monkey, Illenium, Madeon, Mersiv, North Coast, porter robinson, seven lions, SubDocta, Summer Camp, SVDDEN DEATH
← June 12th Weekly Roundup FeatureFvded In The Park Brings An Amazing Lineup To BC →
Don’t forget to follow The Festival Voice for all of your electronic music and festival news!
Instagram: @TheFestivalVoice
Facebook: @TheFestivalVoice
Twitter: @thefestvoice
Snapchat: @thefestvoice
YouTube: TheFestivalVoice
Home » Blog » Bring It On, North Coast!
We use cookies to ensure that we give you the best experience on our website. If you continue to use this site we will assume that you are happy with us eating these cookies.OkLearn more