North Coast Music Festival has unveiled its stacked Second Wave lineup! The festival has added more than 25 genre-bending acts ahead of the festival’s 11th annual edition taking place Friday, September 2 – Sunday, September 4, 2022 at Chicagoland’s SeatGeek Stadium Campus. I am so stoked at all of these additions!

The festival already has an IMPRESSIVE lineup of who is who in the festival scene. For example, this includes some of electronic music’s most celebrated artists, with headliners like Armin Van Buuren, Illenium, Porter Robinson, Fisher (Catch & Release Takeover), Diplo (Higher Ground Takeover), Kaytranada, Seven Lions (Ophelia Takeover), SVDDEN DEATH PRESENTS VOYD (GARDEN OF THE DECEIVER), Gryffin, Jai Wolf, Slander, and Tchami x Malaa. Hell yeah, you already have me hooked! 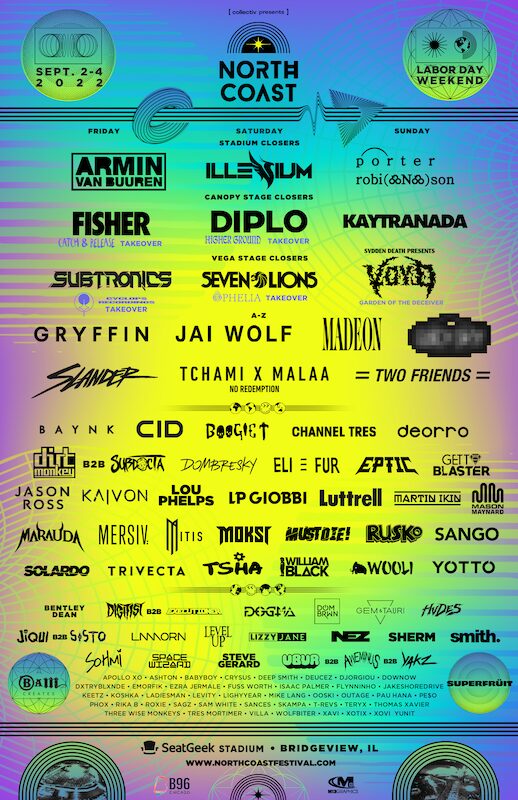 Now, the Second Wave lineup presents three more stadium-smashing headliners! Get ready to headbang with dubstep and sound design virtuoso Subtronics, who will make his festival debut with a stage takeover from his bass-music imprint Cyclops Recordings, Add him with French melodic dance music prodigy Madeon, and seismic dance-pop duo Two Friends. This is one insane party, my friends!

But that isn’t all because following his speaker-rattling North Coast set in 2019, bouncy dubstep purveyor Dirt Monkey will make his return to the festival for a special b2b performance alongside frequent collaborator SubDocta. This is all in addition to other North Coast veterans who will once again take the stage include ethereal future-bass maestro MitiS, Dutch production duo Moksi, and hard-bass technician Wooli. North Coast will also welcome a plethora of additional support acts to the festival.

Last year, North Coast successfully relocated to the recently-renovated SeatGeek Stadium Campus. It was such a neat experience where more than 78,000 Coasties relished in the comfort of the venue’s seven astroturf fields. This beautiful and spacious new venue also propelled North Coast to expand its experiential art installation programming, showcasing massive interactive experiences such as The Void, Into the Fog, Rainbow Hammock Lounge, and The Chill Dome for the first time ever in Chicago. The 2022 edition will invite Coasties to once again explore never-before-seen, large-scale art offerings, in addition to live painting and a plethora of food and beverage vendors.

Both GA and VIP 3-Day festival passes are on sale now, including Payment Plan options. Single-day tickets will go on sale this Friday, March 18 at noon CST.