BUY / STREAM ‘DOWN FOR YOU’ HERE 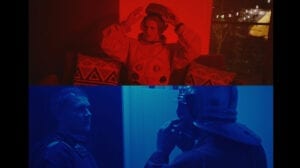 Today, Australia’s Cosmo’s Midnight and Ruel reveal the official video for their latest collaborative track “Down For You”. It is out via Sony Music (Australia), RCA Records (USA) and Black Butter Records (UK). Having drip-fed individual versions of the clip throughout the week, the trio of pop & electronic heroes now come full circle sharing a unified vision to bring their collaboration to life. Check out our previous article about this track!

At the same quintessential house party, Cosmo’s Midnight and Ruel weave their way through the color-glazed maze of costumes. It is directed and filmed by Ruel’s resident creative Grey Ghost from the perspective of each individuals’ adventures. Cosmo’s Midnight are seen stirring trouble and performing switcheroos. This happens while Ruel navigates the dizzying scenes solo in his token space suit. He also dodges the fallout of the twins’ mischief along the way. The visuals give a glimpse into the three personalities that forged the original single amidst squabbles, a live band, a police raid, apparent cameos by each act and a presiding go-with-the-flow mood.

“I wanted to play with the collaboration between Ruel and Cosmo’s Midnight in a unique way that allows fans of both artists to enter into each others’ worlds. Both film clips are seamless one shot videos from start to finish and follow through many rooms and spaces in the one property: my own home. We rehearsed with Ruel and Cosmo’s Midnight a million times before launching into the real takes with 60 extras all dressed in crazy costumes. We shot both videos in 3 hours and we were shitting ourselves before every take as there were SO MANY things that could go wrong even if it was a slight mistake. BUT thank the lawd we got there and it worked!” Grey Ghost

“Down For You” arrived earlier this year as an opus of the forward-thinking abilities that have propelled both Australian acts into the spotlight. With Ruel’s alluring pull amplified by Cosmo’s Midnight’s playful production and signature sonic prowess. The track unifies their diverse talents, moving between genres and delivering moments the world can’t peel their eyes from. Reaching 6 million global streams online in just 2 months after receiving strong playlist support right off the bat. The pop serenade is an example of the impact a collaboration like this can have in uniting two globally-reaching audiences.

2019 saw another huge year for Cosmo’s Midnight, peaking into new directions for the twins. With the effervescent and groove-heavy sounds of singles “C.U.D.I (Can U Dig It)”, “Have It All” feat. Age.Sex.Location and “It’s Love” feat. Matthew Young. The duo kept busy on the stage playing Splendour in the Grass, Australia-wide festival tours St. Jerome’s Laneway Festival. Also, Listen Out, selling out headline shows across the US and Asia. They also performed to major sold out venues on a national tour. In 2018, the brothers cemented their reputation at the pinnacle of Australian electronic-pop. They did so with their debut, triple j Feature Album ‘What Comes Next’. It featured the now gold-certified favorites “History”, “Talk To Me” and “Get To Know”.

Ruel has quickly risen as a pop phenomenon since breakout single “Dazed & Confused”. It earned him a 2018 ARIA title as Best Breakthrough Artist. He also got over 100 million streams on Spotify alongside fellow favorite, “Younger”. Since he has released his 2019 EP Free Time, he has hit over 128 million Spotify streams. He also achieved platinum-status for three singles including most recent hit “Painkiller”. The song was performed across St. Jerome’s Laneway tour, sold-out Sydney Opera House shows and international tours. It has also been announced to play his debut set at Splendour in the Grass 2020.

With another monumental year on the cards for both Cosmo’s Midnight and Ruel, check out the new chapter in their delectable partnership with the new videos for “Down For You” now. 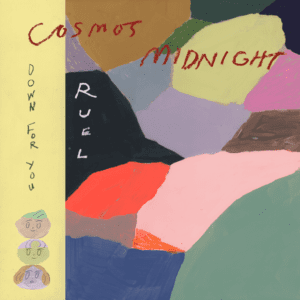