Nightlife may be on pause but having fun sure isn’t! JOY CLUB featuring  BLU HYDRANGEA from RuPauls’s drag race release a new video for ‘In The Night’ – showing us all that we can break the boredom and still be fabulous!

Just a few months ago (pre quarantine), brand new electronic dance act Joy Club, released their debut single, ‘In The Night’. Since release, it has been on an upwards trajectory breaking into Spotify UK Top 40 Viral Charts and clocking over 5 million combined streams, in addition to being heavily supported by Radio 1, KISS Dance and MTV.

From the beginning, the start of the band had a strong philosophy which they professed, one of openness and inclusivity. Now, they’ve released a new video with embodies all of their beliefs, while adding a bit of glamour, dressing up, and fun. 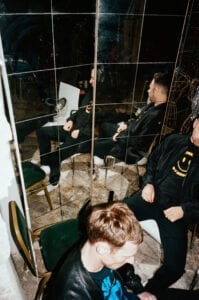 Featuring Blu Hydrangea, a contested from the famed first season of Rupaul’s celebrated Drag Race TV gameshow and many of the dancers and Drag Queens from the infamous Dalston Superstore. Directed by Sam Douek, a young London based emerging director talent, the video showcases LGBTQ+ talent and performers within the city. Featuring a diverse mixture of people dressing up and breaking the boredom of lockdown, while socializing is on hold for the rest of the world. The video shows that you can still dress up, look amazing, and have fun even in lockdown. Keep a look out for the vogue dance the vogue dance thrown in the mix for those who are adventurous enough to imitate.

Formed less than a year ago, Joy Club have already had a great start thanks to their first release which included a rework of French DJ and producer, Martin Solveig’s ‘Juliet and Romeo’. Since the release of ‘In The Night’, they’ve achieved ever growing support including a recent interview with Ana Lunoe on Beats 1 numerous plays on BBC Radio 1, KISS, and even Italy’s M20 Radio.

With plenty more music yet to come and a video that is pure joy, Joy Club are ones to watch for 2020 and beyond.

Nightlife may be on pause but having fun sure isn’t! JOY CLUB along with BLU HYDRANGEA from RuPauls’s drag race release a new video for ‘In The Night’.

Joy Club – In The Night (Dance Video) is out now