After a ten year hiatus since their last album release, Tom Findlay and Andy Cato have finally released the next Groove Armada LP.  The eleven-track ‘Edge Of The Horizon’ is out today via BMG.
Blending a melting pot of styles, ‘Edge of the Horizon’ encapsulates the diverse myriad of sonic influences that have informed the Groove Armada sound past, present, and future. The album shows how Groove Armada’s flair for merging electro elements with the infectious energy of a live band remains as strong as ever. Tom and Andy cut loose, invoking influences which include LCD Soundsystem, Soulwax, Caribou, and Tame Impala.
‘Edge of the Horizon’ hosts a stellar line-up of guest collaborators and vocalists which bring Tom and Andy’s productions to life. Godfather of UK Garage Todd Edwards sings on the shimmering italo-disco anthem ‘Lover 4 Now’. Similarly, the band says was intended to conjure notions of “Ibiza. Poolside at Pikes, that time of the evening when day becomes night and anything seems possible”. Also featuring on the LP are Chicago house music icon Paris Brightledge and Empire Of The Sun and Pnau’s Nick Littlemore who sings on this year’s huge comeback anthem, ‘Get Out on the Dancefloor’.

Their tour bus soundtrack of choice fed into ‘Holding Strong’ and the album’s title track ‘Edge of the Horizon’. The former pulsates with emotion and ‘80s flavored ambiance, as it progresses from a mournful opening guitar to a conclusion that’s as euphoric as it is dramatic. The title track, 10 years in the making, evokes a similar vibe, but with funkier, punchier production.
“When we’re in the studio, we go about it in a super intense way, but it’s a laugh,” summarises Cato. “It’s like the rest of the world shuts down and the two of us make our ideas become reality. It’s fun, and it always has been. The fundamental thing is that we like spending time together and making music.” Findlay believes ‘Edge of the Horizon’ captures the melodrama of ‘Black Light’ fused with the exuberant vibes of 2007’s ‘Soundboy Rock’
With three UK Top 10 hits, three Grammy nominations, and a succession of seminal classics under their belt, Groove Armada is one of the most influential forces in dance music. Their next chapter in history begins today with the release of ‘Edge of the Horizon’ and looks ahead hopefully to when the band can return in full force to do what they do best, performing live for a crowd.
EDGE OF THE HORIZON // OCTOBER 2ND 2020
BUY/STREAM HERE 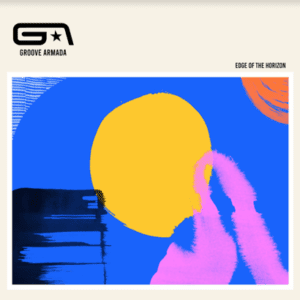