Ready to get wacky, wild, and weird! Well, it’s officially time! Yonderville has grown a reputation for providing top tier talent in the bass music scene of North America. It’s going to get grimy! Now in its 5th year, Yonderville has just unveiled its largest lineup to date!!! It’s full of several of your WAKAAN favorites like the legendary Liquid Stranger. He’s joined by some ultimate heavy hitters such as Lab Group, Yheti, Of The Trees and a DDD-showcase led by New Zealand legends, Truth. Sick. 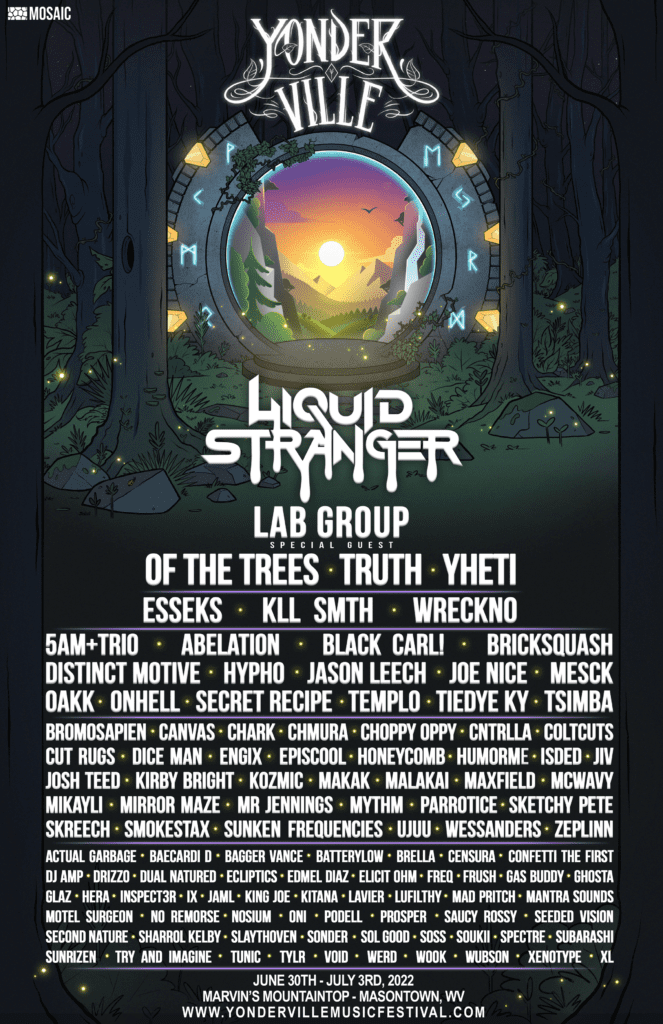 Yonderville wants you to head over Yonder, towards Virginia. In the past few years, the festival has grown exponentially and become the host of several amazing artists such as G Jones, EPROM, and Jade Cicada in recent years. As mentioned previously, this year we’re graced with Liquid Stranger – known widely for founding the now-nationally acclaimed imprint WAKAAN. Liquid Stranger has become one of the biggest and BEST names in the bass scene. At the moment, you’ll see him headlining his own massive BALANCE tour with Mersiv, TVBOO, VEIL, Smoakland, and Canabliss. His forthcoming album is due out in 2022.

The festival was originally formed alongside the late-Charlesthefirst. Now, Potions and Supertask will bring their Lab Group collaboration project to Marvin’s Mountaintop. This is in addition to their other festival dates in 2022 that include Electric Forest and Okeechobee Music Festival. New Zealand’s Truth will host a Deep Dark & Dangerous takeover that’s going to bring on the darkness! This will take place on the final night of the festival before Liquid Stranger, recruiting the talents of Distinct Motive, Hypho, Mesck, and isded to showcase their world of signature deep dub. It’s going to get grimy, that’s for sure.

If you aren’t already sold, we’re happy to announce that there are some other great acts as well. Of The Trees is bringing his insane visuals. This past year he debuted his own label, Memory Palace. This is all in addition to bass music festival veteran Yheti will be performing a main stage set alongside breakout star Wreckno, A/V phenom Esseks, Black Carl! and prodigious young producer, Abelation. Plus, well respected underground acts Kll Smth, Tiedy Ky, Resonant Language, Honeycomb Dice Man, 5AM Trio, Mythm, Ohnell, and Tsmiba will join exciting, fresh names like Malakai, Templo, Josh Teed, Chmura, and Choppy Oppy.

This is going to be a treat for everyone involved! It was previously mentioned that Yonderville is focusing on elevating from a small regional festival to a 5k+ capacity event! This is huge growth! They want to bring the focus to a wide variety of music for years to come. 2022 will offer 3 stages/areas for music, each providing its own unique presentation for attendees. Heck yeah! Vibe your way to the main stage, which will be much larger than in previous years. Be sure to wear earplugs because the festival will offer two stacks of massive Danley BC218’s, 10’x10’ blocks of subwoofers on either side of the stage. This is a Danley Sound Labs proprietary setup. It’s exclusive to this event! Plans are also in place for a beautiful minimalist mainstage shade structure to keep attendees comfortable. Sounds like a WIN!

Marvin’s Mountaintop is a 650 acre property in the mountains of West Virginia, offering natural landscape, VIP viewing areas, and hilltop RV camping that will provide some of the best sunset views in the region. In addition to regular car camping options, attendees will have the option to do group camping, which will give fans a chance to buy 4-car lots with a shared camping space. Perfect for you an your crew to camp together.