It has been a long two years, but this summer, we’re FINALLY back to the full swing of things! The Great South Bay Music Festival presented by Blue Point Brewing Co. is excited to announce that they are back and bigger than ever. Get ready for four awesome days of music and arts as the festival returns to the picturesque waterfront at Shorefront Park in Patchogue Village from Thursday, July 7 through Sunday, July 10, 2022. Tickets are available to purchase now at www.greatsouthbaymusicfestival.com. 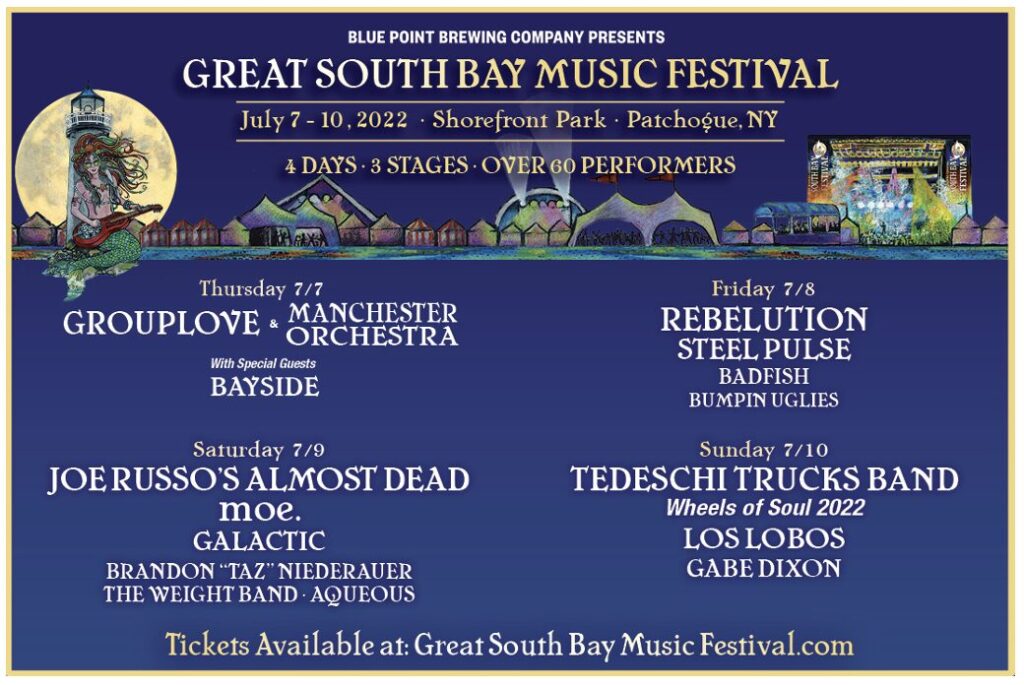 This is the festival’s 14th anniversary, and as a result, the festival wants to celebrate by featuring over 55 performers on three stages. See some of the best from all kinds of different genres such as classic and contemporary rock, blues, indie, jam, pop, Americana, country, reggae, and funk genres. The fest boasts multiple craft beer and wine tents, an artisan and craft market, and food court offering a diverse gourmet menu of funky and healthy fare. This is going to be fun!

Ready to join us for four different days of music? This eclectic lineup includes some killer headlines in addition to some cutting-edge rising stars. It all kicks off on Thursday, July 7th with indie-rockers Grouplove and Manchester Orchestra will Co-Headline, and Long Island’s own Bayside will support (10 performers on two stages).

And we can’t forget about JAM day!!

Saturday at the festival is typically “Jam Day”, but 2022 brings the most eclectic and diverse lineup to date. We still keep it pretty jammy with headlining the main stage is one of the Grateful Dead’s most proud and popular tributes: Joe Russo’s Almost Dead. Also, returning, one of the pre-eminent progressive rock bands on the scene today, moe., plus New Orleans funk, jazz and “impossible to categorize”: Galactic. Lastly, also returning to our main stage is Long Island phenom guitarist Brandon “Taz” Niederauer who has shared the stage with Gregg Allman, Gary Clarke Jr., Warren Haynes, Lady Gaga, and so many more, plus the Weight Band and jam-rockers: Aqueous (19 performers on 3 stages). Sounds fantastic!

Finally, we close it all out on Sunday with what critics have called “The best show on the road today”: The Tedeschi Trucks Band and the “Wheels of Soul” Tour, featuring the full 13pc.  Tedeschi Trucks Band, playing a rocking two-hour set, in their only metro NY Summer appearance.  Also, appearing on the Main Stage will be Americana-Heartland Rockers: Los Lobos, plus, Nashville singer-songwriter and multi-instrumentalist: Gabe Dixon and his Band (14 performers on 3 stages).

SQUONK: Commissioned by The Kennedy Center: Squonk – “Hand To Hand”:

How do we explain two giant moving puppet hands, each the size of a house, with music that blows that roof completely off? Well, that’s about how we explain it! Audience members, children, and adults will be grabbing the rigging and controlling the hands and fingers. SQUONK will only be performing in Metro NY at the Great South Bay Music Fest. If you have children, (or not…) do not miss this show. Two shows daily, Saturday & Sunday.

The festival believes that supporting emerging and local artists is important! This year, the festival will showcase 30 amazing newcomers that are excited to show everyone their talents! Don’t miss these shows because I’ve always found someone new to love at a festival. Some of these names include: The Robinson Treacher Band, Quarter Horse, Whatever We Are, Aubrey Haddard, Oogee Wawa, Zuli Jr., Scared 20, and a very young Samsara.

Great South Bay is a proud part of the LI Community and is committed to doing all we can to support our less fortunate Long Island brothers and sisters.

Great South Bay will continue to donate $1 from every ticket sold, to the GSB-Stony Brook Cancer Center Fund. To date, the fest has raised over a quarter of a million dollars for the cancer center.

Children ten and under are free.