At this year’s Bonnaroo, I (Daniel) got to witness King Gizzard and the Lizard Wizard’s return to the Farm. My friend Stephanie, who was shooting photos at the festival, saw this couple on the rail with a sign that read “Just Married! Newlyweds here on our HoneyRoo.” She talked with them briefly and got their contact info so we could share their story. I wasn’t able to talk to them myself while at the festival but was blown away after reading why the couple was on the rail for King Gizzard at the first Roo in three years. Find their tale below. 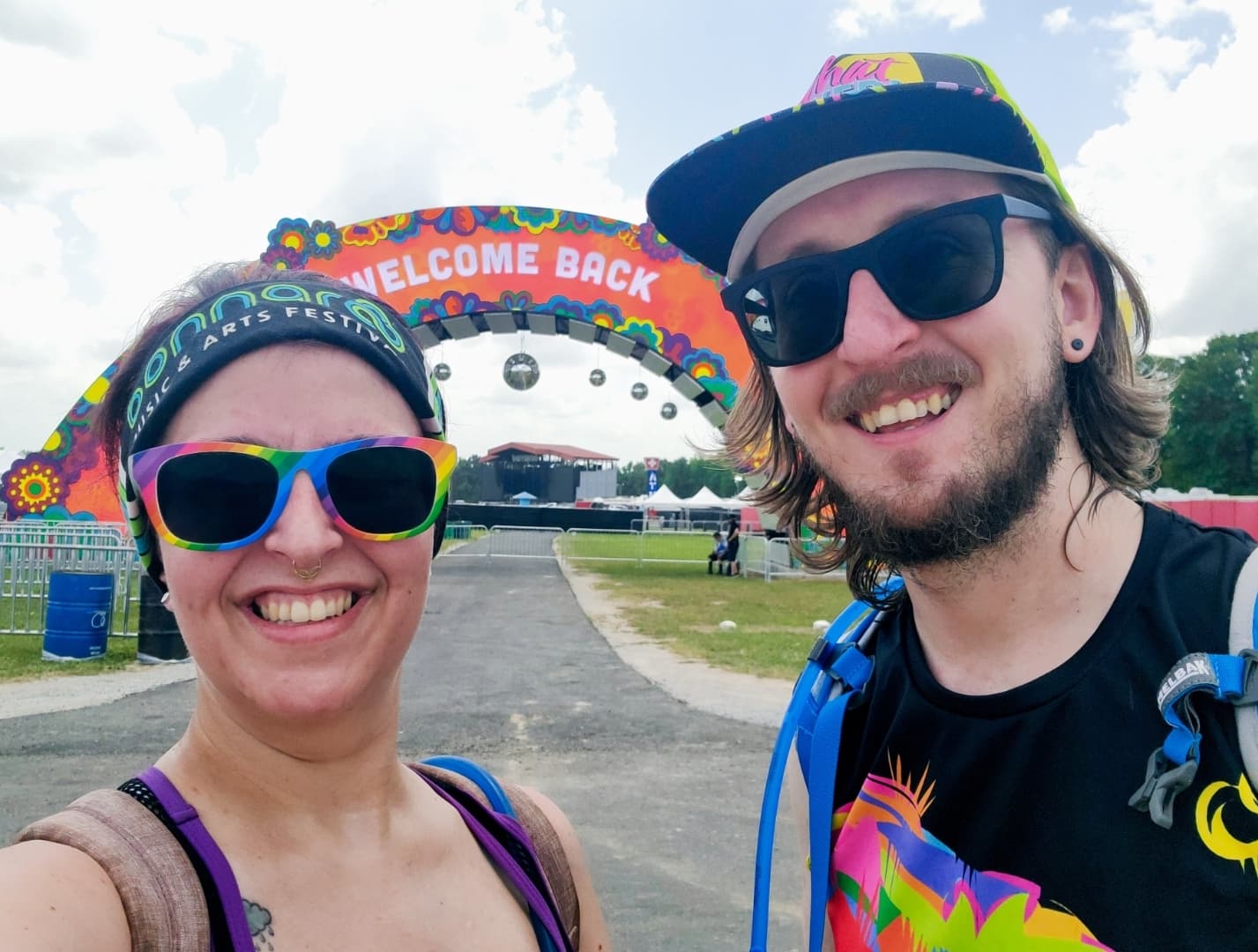 My name is Rachel Naab, and this is the story of what Bonnaroo means to me.

The Bonnaroo Music and Arts Festival has held a special place in my heart from the very first time I stepped foot on the farm at the tender age of seventeen in 2008. I’m from the Springfield, Missouri area, where I’ve lived for most of my life. I had never heard of Bonnaroo until my buddy saw it on a list of Jack Johnson (our favorite artist at the time)’s tour dates. The high school we attended didn’t have any sort of official senior trip, so we decided to make our own senior trip by traveling to wherever Jack Johnson would be touring nearest us, which just happened to be some farm in Manchester, Tennessee. Weird, but okay.

Neither of us had ever attended a music festival before, and in fact, only had attended a small handful of concerts up until that point. Springfield is the third-largest city in Missouri following St. Louis and Kansas City, so while we do get some great musical acts that come through on occasion, more often than not we travel for live music. As broke teens, though, we weren’t doing a lot of traveling, so our families agreed that it would be an appropriate graduation present to allow us to travel to see Jack Johnson.

What a life-changing decision that unexpectedly turned out to be. As any tried-and-true Bonnaroovian knows, it is utterly fruitless to attempt to explain exactly what it’s like there to someone who has never been. I also understand how frustrating that must be to hear if you’ve never been, and I’m acutely aware of how much it makes Bonnaroo sound like a cult. That said, it’s a truism and I don’t know what I could say that anyone else hasn’t already. I can, however, tell you that after that first year I knew that I would return any year I had the means and opportunity. 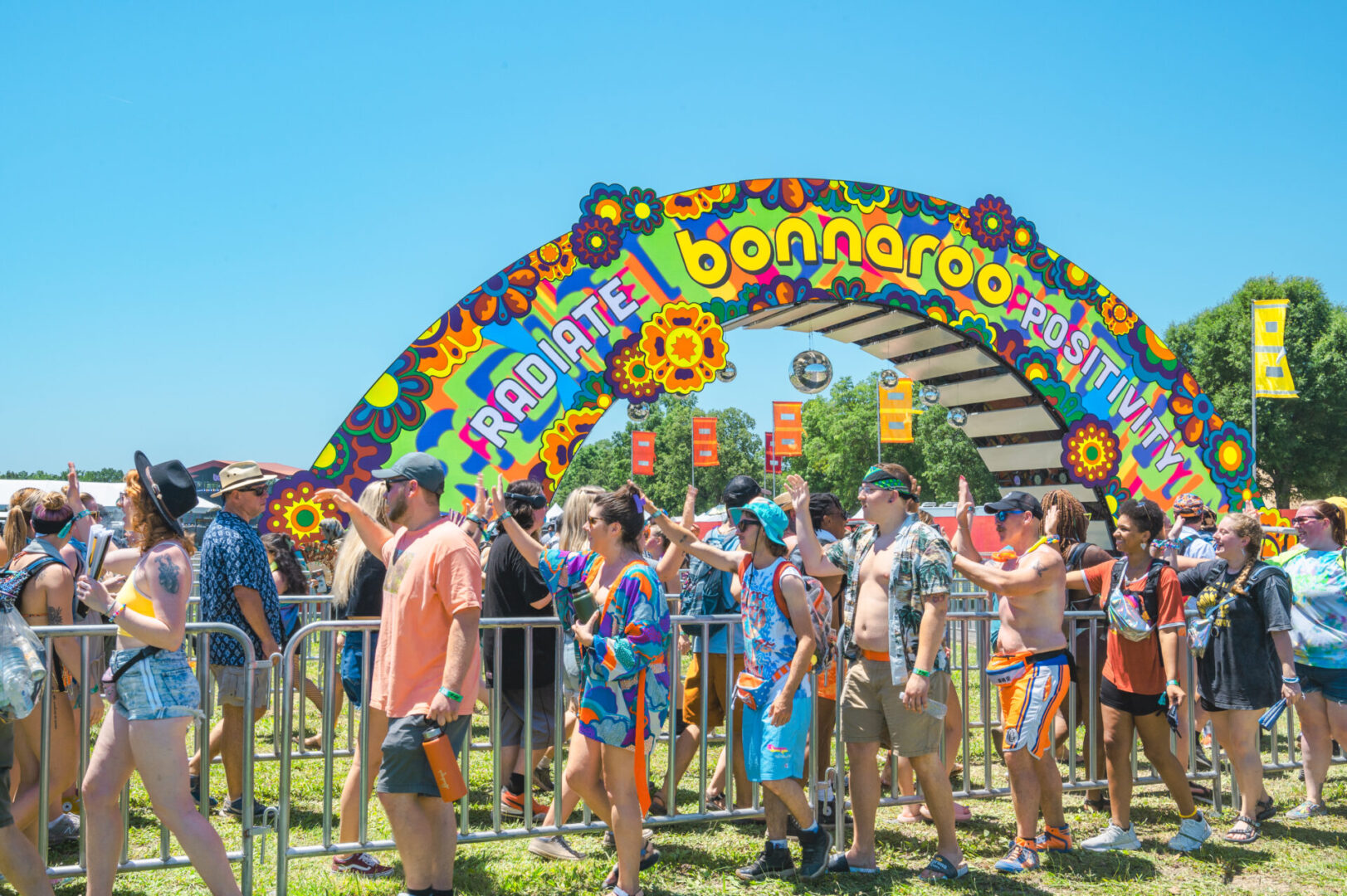 I was lucky enough to return to the farm in both 2014 and 2015 accompanied by my mom, again in 2019 by myself (nothing was going to stop me from seeing Childish Gambino, okay? I solo camped in SheRoo with my tiny Smart car, a ridiculous story for another time), and finally again this year.

Bonnaroo 2022 was an extra special one for me. Not only have we ALL been waiting to return to festivals and live music since 2019, but this year’s Roo also doubled as my honeymoon.

I met my now-husband Cory in February of 2015, just a few short months before the festival that year. We hit it off instantly and felt like we had known each other forever. I knew pretty early on that he was it for me, and later on he shared that he felt the same way. One of the things we bonded over so quickly and easily was our love of music; the weirder and more esoteric, the better. After I came back from Bonnaroo that year, I told him that I knew I must have some pretty strong feelings for him because I couldn’t stop thinking about him while I was on the farm, which was saying something for me.

Knowing what a music-lover he is, I’ve been trying to talk Cory into going to Bonnaroo with me for years, and he always said he was interested, but it’d have to be just the right lineup for him to consider camping in the heat for four days for it. I completely understand that—it IS a huge commitment, and it probably isn’t for absolutely everyone. The heat, the walking, the porta-johns…it can be uncomfortable and overwhelming if you aren’t prepared. You gotta hydrate. You gotta break in your shoes early. But, I told him, as long as we are prepared for the elements– which your Roo-veteran wife totally is– we’ll have a great time. In 2020, with King Gizzard and the Lizard Wizard and Tool on the lineup, he was finally in… and then, well, you know. 2020 happened. 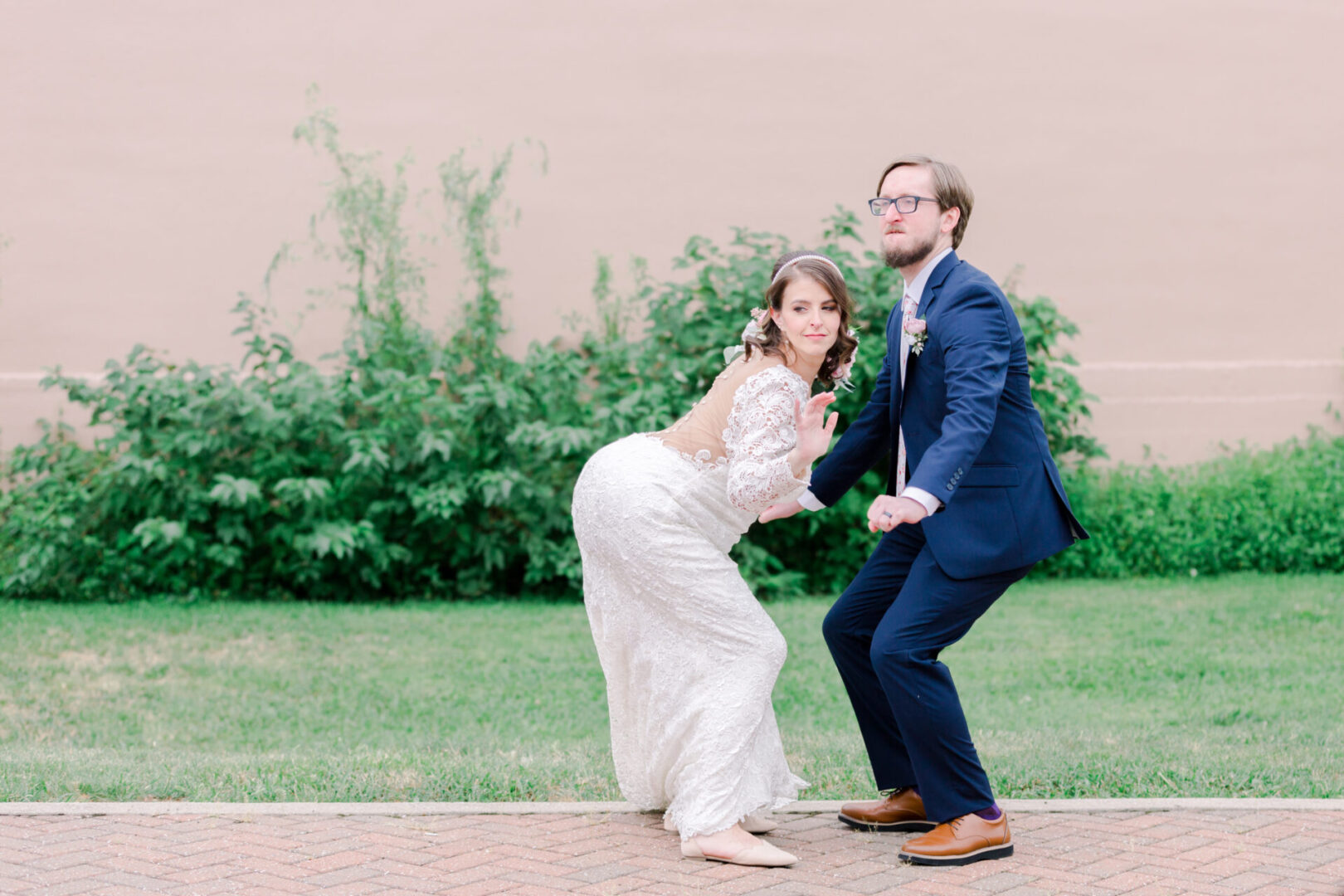 Cory and I not only had tickets to both 2020 and 2021, but when Bonnaroo ‘21 was postponed from its normal June dates to September, we realized it fell about two weeks after our wedding, so we decided to make Bonnaroo 2021 our honeymoon! I designed a sign and had it printed to be used as our totem on the farm: a light-up posterboard sporting the Bonnaroo logo from 2019 (the drippy rainbow one, which I also have tattooed on my right shoulder) and the text “Just Married! Newlyweds here on our HoneyRoo”—a portmanteau of “honeymoon” and “Bonnaroo”.

Of course, we were bummed when Hurricane Ida came through and flooded the farm, making 2021’s event impossible to move forward. We read about the cancellation around half an hour before we had planned to leave our house, but we were grateful that at least we hadn’t already made the drive like many others only to have to turn back around and go home. Since we still had the time off work and a dogsitter arranged, we ended up taking a spontaneous vacation to Denver, Colorado to enjoy some time in the mountains together. We had a lovely trip, but it wasn’t what we had planned. Additionally, all of this was after our wedding had been postponed twice due to covid as well—we were originally planning to be married in 2020. We were finally, happily wed in August of 2021. Needless to say, the past few years have been an excellent lesson in rolling with life’s punches and adjusting our expectations, as well as realizing that we can handle just about anything together.

Fast forward to this year’s Bonnaroo: after two wedding postponements, two Bonnaroo cancellations, and diverted honeymoon plans, nothing was going to stop us! I had already made the sign for our totem and I didn’t want it to go to waste, so we decided that Roo ’22 would be our honeymoon do-over, and BOY WAS IT EVER. We had such a blast, and I can say without hesitation that this year was the best Bonnaroo I’ve been to thus far; getting to introduce my new husband to one of my favorite places on earth was such a special treat. I took a photo of him enjoying his very first Spicy Pie at about 11:00am on Wednesday. Bonnaroo magic.

King Gizzard and the Lizard Wizard is hands-down our favorite band of all time. From the first time I heard Rattlesnake several years ago and subsequently introduced Cory to them, we began voraciously devouring their extensive discography. This is the point at which I’ll share that we’ve also had tickets to see King Gizz for quite a while—we’ve had tickets to both nights of their upcoming Red Rocks shows in early October since they first went on sale, which was originally meant to be a gift for Cory’s birthday in May of 2020. So, this was also our first time getting to see KGLW live after waiting for more than two years, and we knew we needed to get there early to get the spot we wanted. We arrived at “That Tent” around 6:30 in the evening (oh you know, just a casual five hours early), and enjoyed Japanese Breakfast and Bleachers while we waited for our boys to take the stage. After the Bleachers crowd cleared out, we were able to scooch right on up to the rail. Success! It was during that time that we started chatting with other fans around us and made a bunch of new friends who shared our interest in King Gizzard, which Cory would later describe as one of his favorite parts of the whole weekend. 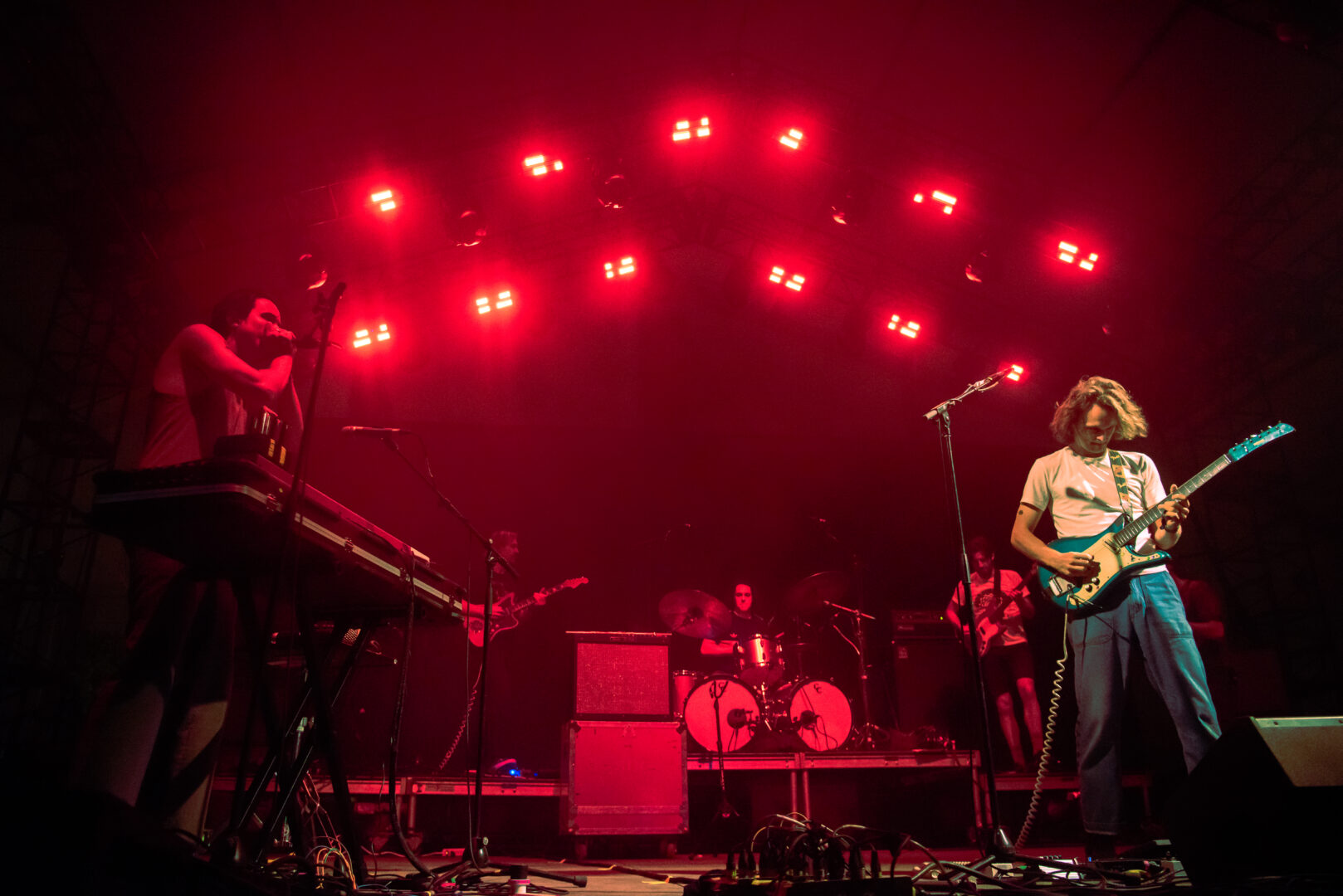 King Gizzard proceeded to melt our absolute faces off. It was everything we had hoped for and more. We’re now looking forward to the Red Rocks shows in a few short months with excited anticipation, and we have tickets to see them on Halloween too! You might say we love them just a bit.

Suffice to say that we had a seriously incredible honeymoon do-over, and King Gizzard and the Lizard Wizard were the peak experience we’d been waiting for. Many kind Bonnaroovians stopped to congratulate us after reading our “HoneyRoo” sign, high-five us, and several kind souls gave us little gifts, stickers, and some fun handmade trinkets. I could wax poetic about the magic of Bonnaroo for hours, but it can also be summed up neatly in the time we spent in That Tent on Friday night: a surreal, once-in-a-lifetime experience, up close and personal with our very favorite band playing the songs that mean so much to us, surrounded by new friends also having the time of their lives. The electricity in the air is not quite like anything else. 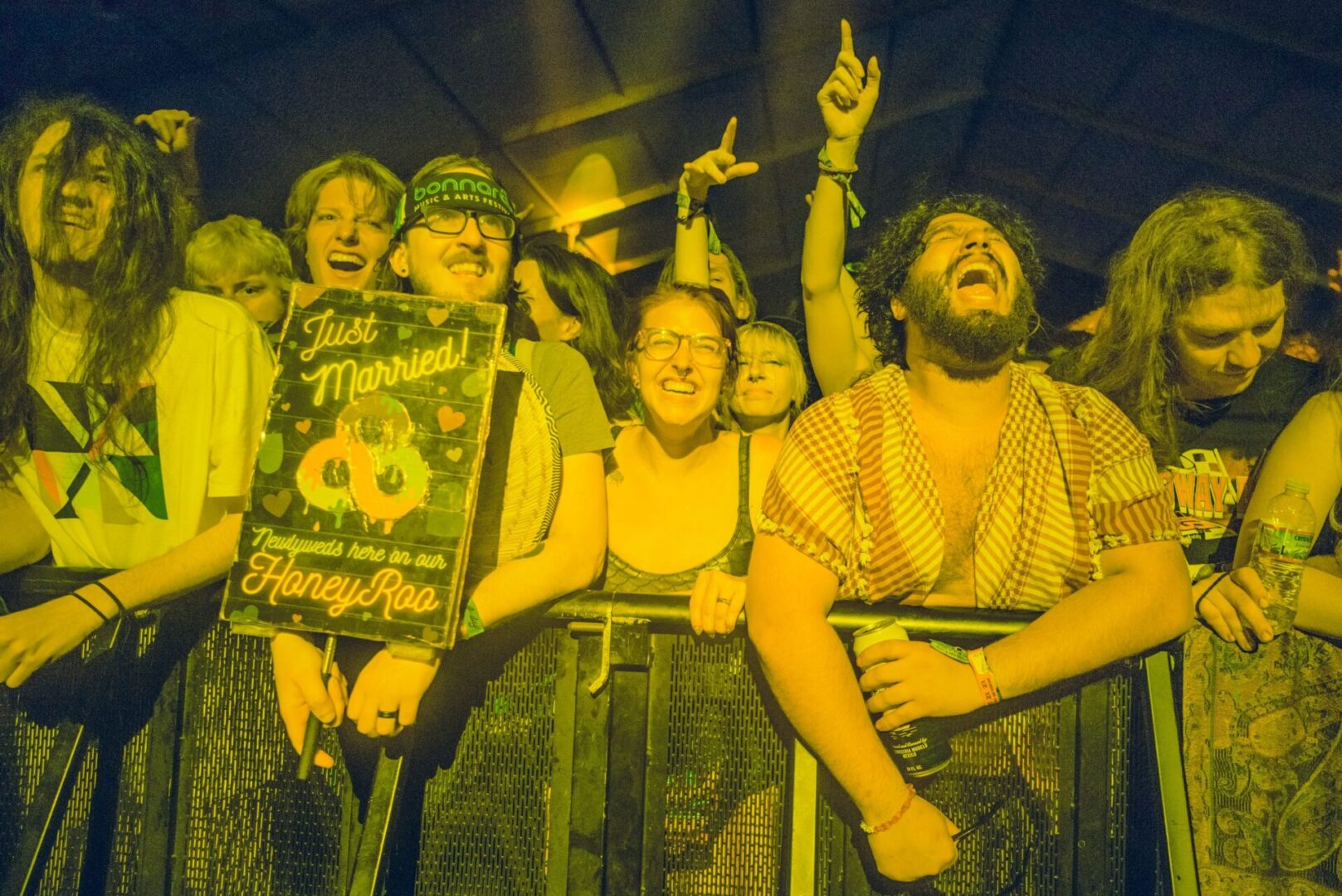 My husband Cory is now a total Bonnaroo convert, too, and says he’d love to come back in the future. He isn’t quite sure whether or not I’ve roped him into a cult, but he can’t seem to stop smiling and high-fiving people. Until next year, Happy Roo!