Fantasy. Fireworks. Family. And lots and LOTS of lazers.

Last weekend I had the privilege of camping at Imagine Music Festival at the Atlanta Motor Speedway in Atlanta, Georgia. I must admit: I didn’t know what to expect when I arrived at Imagine. I had heard from several close friends and sources that Imagine was kind of basic. They said that the music was alright and that the festival was “alright”. I can tell you now that their opinions couldn’t be further from the truth.

Imagine Music Festival is THE BEST EDM Festival in the South East.

It might even be one of the best festivals in North America. Now I know what you’re saying “WHOA that’s a bold claim!”. But hear me out and join me as I break down my experience and why I think Imagine needs to be at the top of your list for next year. But first: here’s a little video to give you a taste of what I’m talking about here.

The first thing that anyone has to consider when looking at Festivals is the total price of their trip. No matter how good a lineup is, it’s not worth it if you can’t pay rent when you come home. So total price includes tickets, travel, materials, merchandise, and food. I bought my ticket at Early bird prices even before the lineup was released. I got a 3-day GA wristband for $150 which is a STEAL. That’s $50 a day for 11 hours of music each day. And early bird with camping was only slightly higher, the only reason I didn’t buy that was because I was originally going to stay with friends in the city. I ended up purchasing a camping add-on for $100 (past early bird prices) but even so, at $250 for 3-days, still a steal. Especially when other EDM camping festivals on the East Coast are starting to reach the $300 to $350 range. 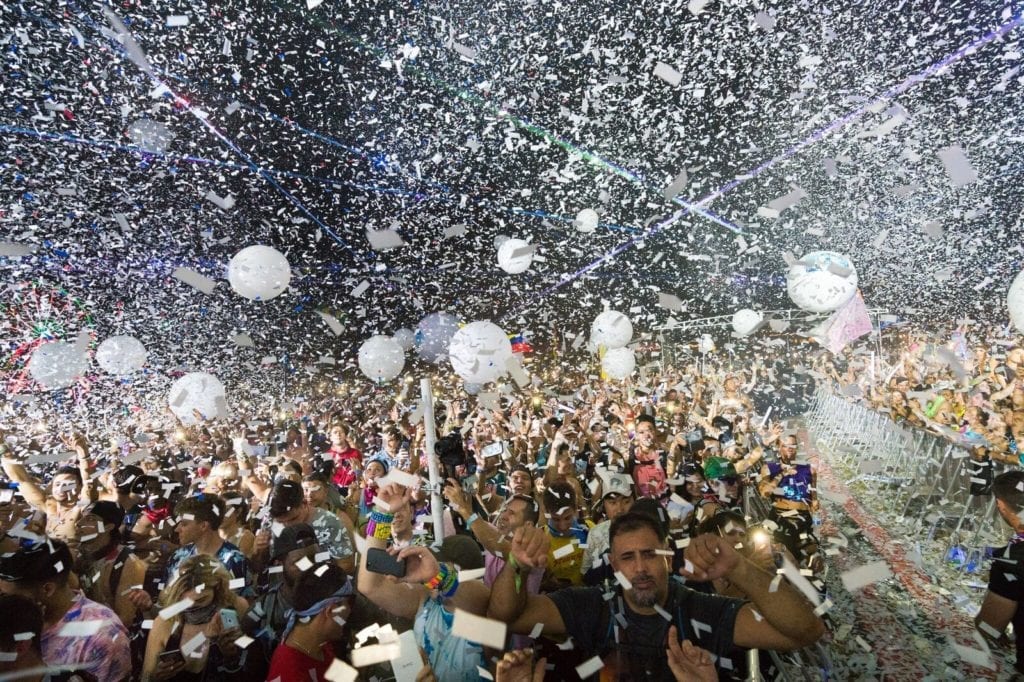 In terms of other prices and costs, I certainly wasn’t breaking the bank. Gas in the south is relatively cheap. If you’re flying, Atlanta International is one of the biggest Airports on the East Coast, so flights are typically affordable, especially in September. There was a WalMart and a Dollar Tree not five minutes from the venue, so it was easy and cheap to find all your weekend food and rave gear. Did I mention the Festival is September 21-23? So the Walmart was stocked with cheap and fun Halloween decorations and costumes.

As far as food and merchandise inside the festival, the food is priced generally lower than most Festival food. I could get amazing smoothies and delicious island noodles in the $6-12 range when at other festivals I often found myself shelling out $15 a plate. The vendors in the marketplaces were all super kind and very chill, and I had vendors offering me buy 1/get 1 deals as well as making discounts on flow hoods and pants that usually would cost an arm and a leg at places like E-Forest.

As a cost-conscious individual who is always looking for a deal, I found nothing but great bargains and great prices for the Imagine Experience. 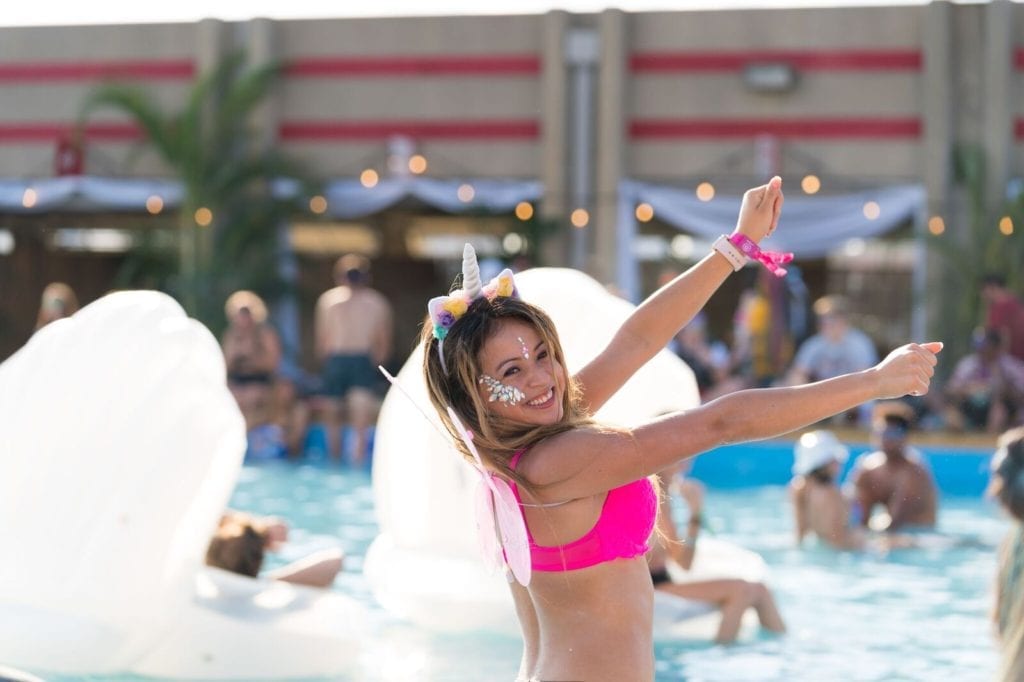 Now the second most important quality of a music festival: the music.

Not many people know this but Imagine is the last major independently owned and operated EDM Festival in America. And I knew that this year, which was their 5th anniversary, they were going to pull out all the stops for their lineup, which is why I gambled and bought my tickets before the lineup was released. And oh boy did they pull out the stops! You can review the lineup HERE.

Armin Van Buuren. Bassnectar. Leah Culver. Kaskade. Alesso. Getter. 12th Planet. Bear Grillz. Zeds Dead. The list goes on and on, but the main point is that there was a major headliner for every attendee and every genre. Trance, Bass, Techno, Dubstep, House, etc, etc, it was all there! In the past year, I’ve been to 7 festivals, and Imagine by far had the best and most diversified lineup I’ve experienced. And the best part? Because of so many different headliners and stages spread across the venue, it didn’t really matter when you showed up, you could find an amazing place to experience the show. I walked right up to the rail for Armin Van Buuren and got into the pit for Bassnectar about twenty minutes to show. 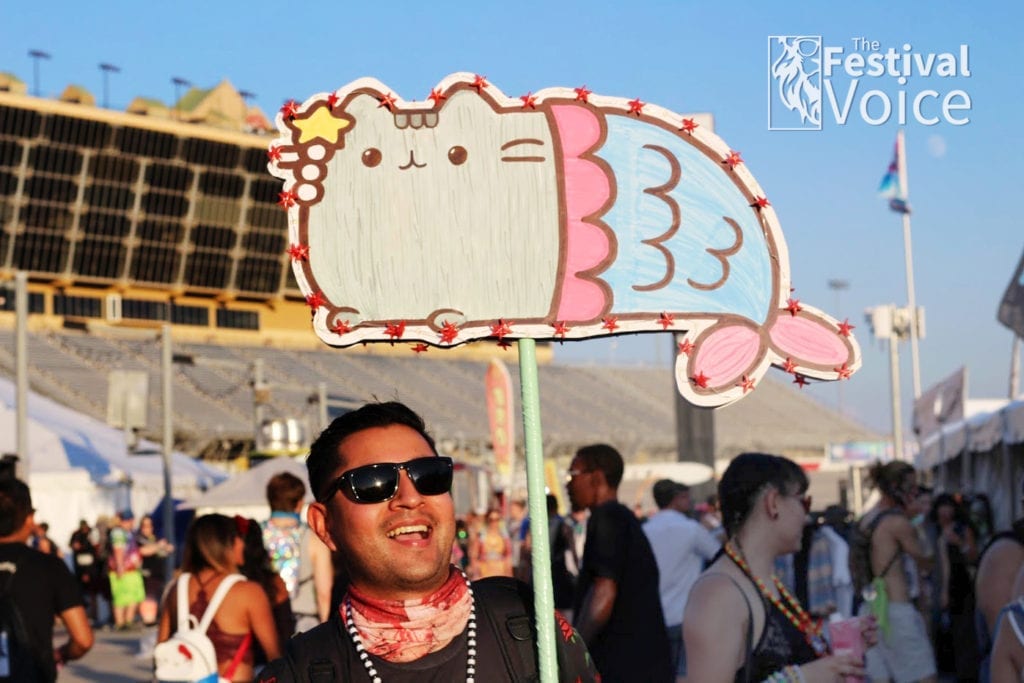 Now the first thing that made Imagine’s music SO GOOD was the quality of the sound design in the space. You can tell they spent every expense to create an environment that was perfect for the distribution and quality of the sound system and it’s frequencies. The sound was clean, cranked to the highest levels of safe human hearing, and it never once overwhelmed me. It was never too loud to damage the ears, and you got a perfect dose of the highs and the lows. No one wants to go to a Festival where the sound is too loud because it’s uncomfortable. And an ill-produced sound stage usually befalls technical difficulties as well. Not at Imagine.

The second thing that made Imagine’s music so good was it’s position in the Motor Speedway. Now stay with me here. Sound travels in waves that bounce and reflect off of many surfaces. So the natural curvature of the motor speedway, combined with it’s never-ending rows of bleachers, perfectly amplified the highs and lows, and continued to bounce the sound from all around the stadium. The acoustics in this space took on their own life. One could walk away from a stage and still get the distinct feeling that they were living inside of the sound. This effect made it feel almost like one was living in an alien world, a space far away from reality. AND I LIKED IT. I had never experienced anything like that. And for many EDM fans, that alien, otherworldly feeling is exactly why we love this music and this culture.

And the DJ sets? Absolutely phenomenal. You could tell that every DJ brought their A-game. There wasn’t a single set that I didn’t enjoy. Artists were debuting new music, sharing new songs that they had collected over the course of the summer festival season from all over the world. I heard new songs and sounds that I’ve never even heard before. And I don’t mean to say that I hadn’t heard this music out of ignorance. I mean to say that Imagine seems to have become THE festival for artists to play new groundbreaking music.

“It was deep. It was underground.”

And so at Imagine I got incredible underground music at big-budget production value. 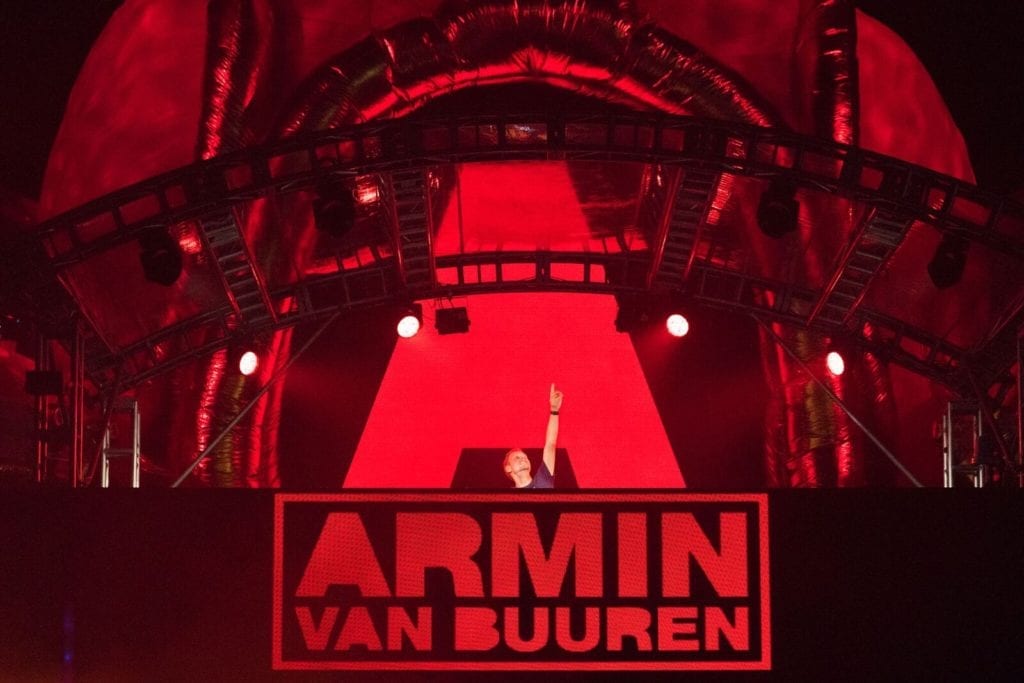 Finally, what was the overall Aquatic Fairytale like? I can tell you I was simply living in a fantasy land of good vibes and good music. At the end of the day that’s what counts most, right? I’ll give you the quick rundown of the good and the bad of the Imagine Experience I had. 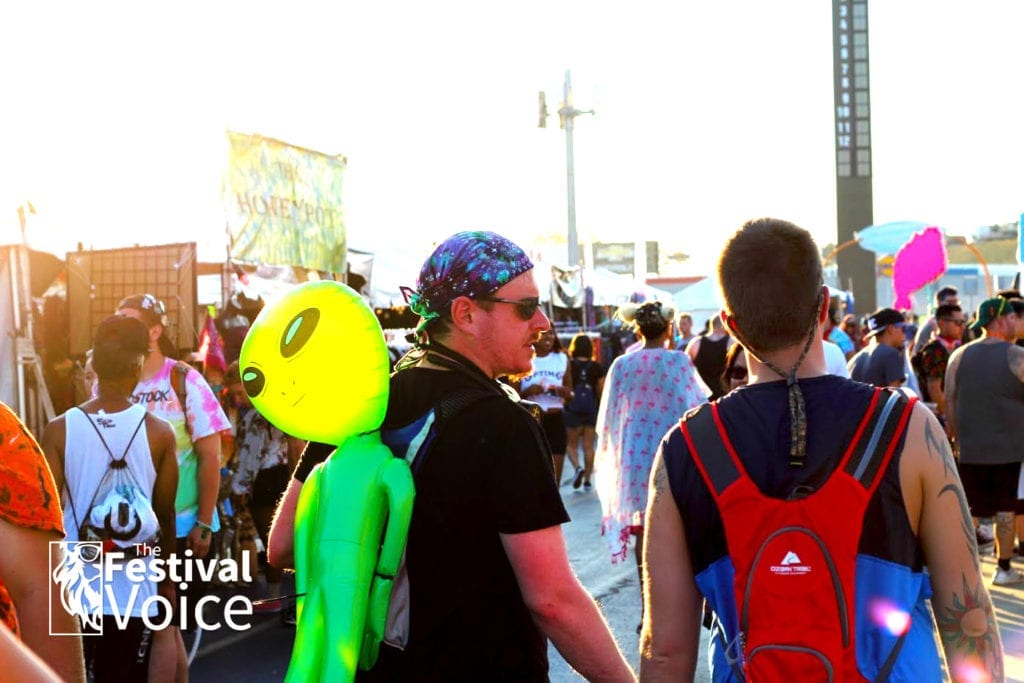 Georgia is hot. And before the sun goes down, you’re going to feel like you’re melting. That’s just the south for you and generally any camping festival south of Canada. But my neighbors were fantastic, good people. The camping spots are a little cozy and the spacial boundaries are loosely set, so you can work this to your advantage. There wasn’t a strong security presence in the camps, so there were reports of thefts. But again, you get that at all festivals. Keep your valuables locked in your car, your tent padlocked, and you should be fine. I personally didn’t run into a single person all weekend who gave me creepy or bad vibes, and thus I felt safe and comfortable all weekend long. Bring shade, bring fans, money for ice, and you should be A-Okay. 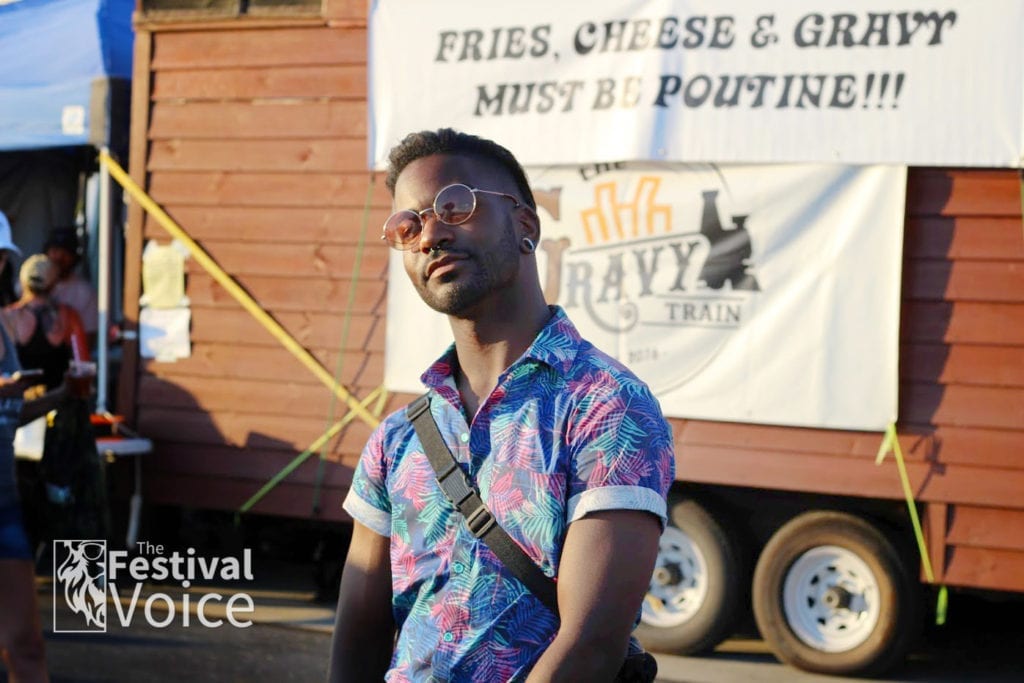 Fantastic! As I mentioned earlier, I didn’t really get creepy or bad vibes from anyone I met at the Festival. People were kind and open to the love and PLURR which makes these festivals and this community thrive. I met friends and festival family from previous festivals, as well as made new deep bonds of love and connection with strangers near and far. People came as far as California and England to be a part of this festival, and I totally understand why. I didn’t see many medical emergencies nor did I witness many arrests. Good vibes all around! 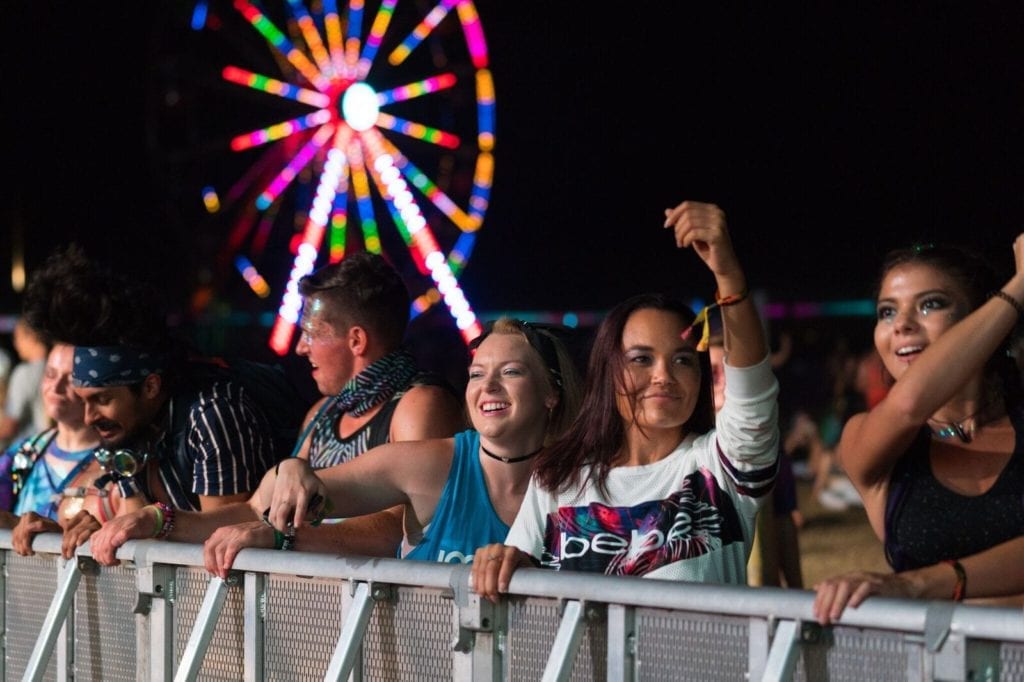 OFF THE HOOK. Stunning and impeccable stage design. I saw more pyrotechnics at this festival than any festival I’ve ever been too. And more lazers too! Check out my video below of the tear-jerking tribute Galantis made for Avicii. There was more than enough room to dance and I never once felt too crowded or overwhelmed by audiences. There were tons of performers and go-go dancers on the stages, lavishly decked out in light blues and purples, dancing on poles, dancing in inflatable balls, and roaming the streets of the festival. Massive beach balls bounced around the audience and the pit during performances. Confetti and fireworks flew through the air as wine poured in ancient Rome. There was a pool in perfect view of the mainstage which was a safe haven to soak your feet or splash around to the music. And there were tons of smaller stages popping up all over the place. The music literally never stopped and it was incredible. And after the main acts finished at 3 am? The silent disco outside of the venue was spinning several different genres of music from downtempo to “lets keep the party going till the sun comes up” music. And the party raged all night and into the am. There was a vending village with delicious food and smoothies, as well as affordable merchandise. There were fun and exciting artistic exhibits scattered all over the festival grounds as well. Not a day went by where there wasn’t something fun, exciting, and new to discover. I’m confident I didn’t even find everything you could find because there was just that much to discover! Oh and Bear Grillz proposed at the end of his set. The Aquatic Fairytale was alive and well.

You need to go. That’s all there is to it. If I haven’t convinced you by this point, then you should go online and see what the rest of the community has to say. In a time where festivals face more and more uncertainty, when production companies are going under or being bought out by big mega corporations, Imagine stands as the Shining City on the Hill. An original and interactive artistic masterpiece true to it’s EDM roots and it’s community of loyal fans who return year after year. I’m moving to California this new year, and even still I’m going to find a way to make it work. Imagine Music Festival is more than an Aquatic Fairytale. It’s Fantasy. Fireworks. Family. And lots and lots of Lazers!

As always, The Festival Voice hopes to catch you at Imagine Music Festival next year! Start planning now and buy your tickets HERE!