It’s going to pop at the next Noise Pop Festival! The festival is San Francisco’s premier independent festival. And they’re ready to expand their already impressive lineup with a second round. It all returns this February 20-26th and we’re super psyched!  Tickets to each of these newly announced concerts are on sale now via www.noisepopfest.com in addition to full festival badges.

The event itself serves as a cultural arbiter and community advocate within the local arts scene for three decades while promoting thousands of concerts and creating unique festival properties across Northern California. As a result, Noise Pop looks forward to celebrating the 30th anniversary of the team’s flagship festival brand – Noise Pop Festival – this coming February. It looks like a lot fo fun! The 2023 lineup will ultimately offer fans a meticulously curated selection of iconic indie-rock darlings, boundary-defying up-and-coming acts, rare reunion shows, anniversary album plays, and Bay Area debuts from international performers, along with more than 100 local performers found here in the Bay Area. 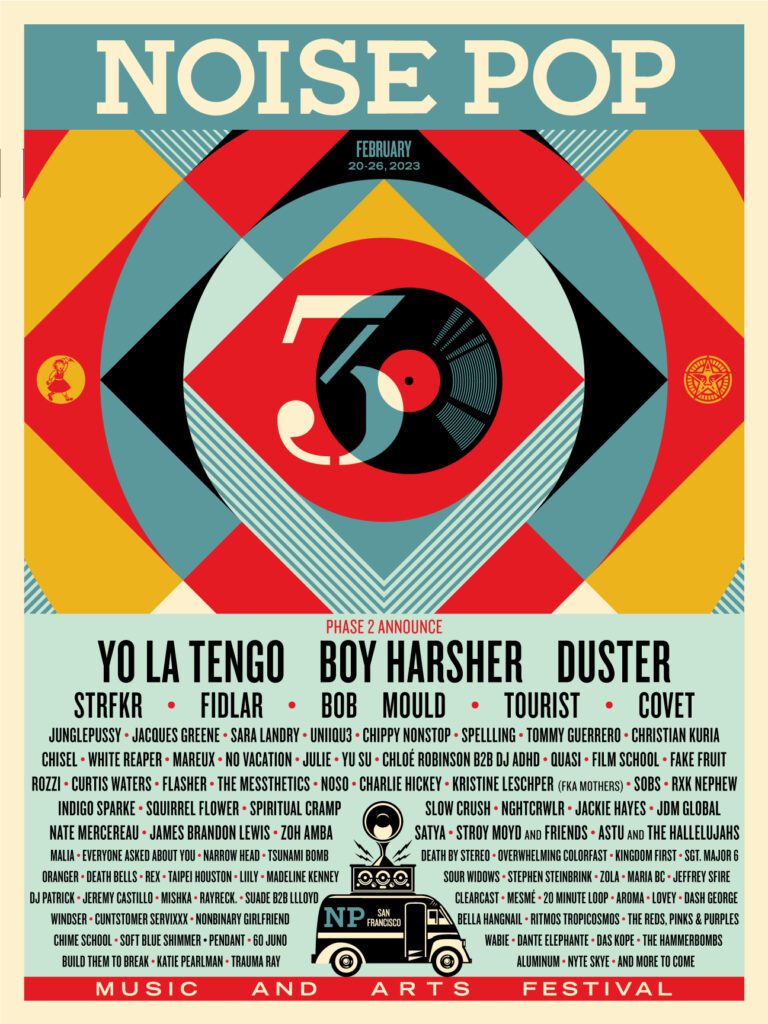 Some of the newly announced performers include Junglepussy as the acclaimed female MC headlines The New Parish on February 26; Canadian DJ/producers Jacques Greene as well as Yu Su who are joining the bill for the Tourist showcase at Public Works on February 24; Sara Landry being tapped for the HE.SHE.THEY lineup at Public Works on February 25; Tommy Guerrero as the accomplished skateboarder-turned-music producer returns for a second consecutive year to perform at the hometown festival; and Spellling who will help close out the week-long concert series on Sunday night at Great American Music Hall.

In addition to the music, you can enjoy some comedy as well! The long-running Bay Area comedy showcase “The #HellaFunny Comedy Night” makes its Noise Pop Festival debut featuring Stroy Moyd, Chris Riggins, Allison Hooker, Emily Van Dyke, and some special to-be-announced guests at The New Parish on February 25, although other non-music and alternative programming including film screenings, art shows, happy hours, and more will be revealed in the coming days.

Each of these new phase 2 acts will join the already stacked lineup that includes Boy Harsher, Duster, Y La Tengo, STRFKR, Bob Mould, Tourist, and San Jose’s own Covet, among many others. Additional festival events range from a four-night residency at SFJAZZ Center’s Joe Henderson Lab to the highly anticipated return of the international event series HE.SHE.THEY. to the very first North American show for the Singaporean rock outfit Sobs, and so much more.

Plus, Noise Pop has organized a very special opening night celebration on February 20 at Great American Music Hall featuring reunion performances from several 90s throwback acts and cult favorites like Chisel, Everyone Asked About You, and 20 Minute Loop; while punk rockers FIDLAR performs an intimate kick-off show at Bottom of the Hill; and dream-pop band No Vacation returns to SF for an unofficial homecoming performance at The Chapel.

Ready to grab some tickets? Well, you’re in luck, because weekend badges are on sale now, along with tickets to each individual concert via www.noisepopfest.com. All badges grant access to all general admission (non-reserved seating) music concerts, happy hours, after-hours, and film screening events throughout the weeklong festival, although fans are encouraged to act fast as badges are limited and pricing will increase with each wave of new performer announcements.  Grab them ASAP!

“With only a few more weeks until Noise Pop Festival gets underway, this is an exciting time for our team as we gear up for the 30th anniversary. Noise Pop 30 will offer attendees an eclectic lineup unlike any other found here in America featuring a number of creative artists who aren’t afraid to push boundaries while they bring together fans from all walks of life. This year’s lineup has a little something for everyone, but stay tuned as we have a ton of local acts still to announce, plus new events like film screenings, art shows, and more on the way,” said James Lopez, Noise Pop’s Senior Talent Buyer.

Over the course of a full week this coming February, Noise Pop Festival will once again transform the entire SF Bay Area each night into sprawling festival grounds with music concerts, art shows, film screenings, happy hours, secret after-hour parties, and more taking place all across the city. Participating venues next February will once again include a number of historic concert halls and landmark venues like Great American Music Hall, Bottom of the Hill, The Chapel, Rickshaw Stop, The Regency Ballroom, August Hall, The New Parish, The Ivy Room, Public Works, and 1015 Folsom, among others.

This year’s festival’s artwork was designed by none other than Shepard Fairey, considered one of today’s most accomplished and sought-after contemporary artists. Learn more about his incredible artwork by visiting his company Obey Giant at www.obeygiant.com.