Happy GRiZMAS in July everyone! Our man, GRiZ has just announced that he is playing in North Carolina again! He’ll be touching back down at one of his favorite places to play out, the Riverfront Park Amphitheater in Wilmington, North Carolina. The doubleheader kicks off Friday, July 30 with a Full Flex Set from GRiZ alongside EAZYBAKED and Kilamanzego. The throwdown continues Saturday, July 31 with a journey through the laidback side of GRiZ’s record box with a Chasing The Golden Hour Set followed by a renowned ‘10-’17 set. Giligan Moss joins the party for opening duties on Saturday. Fans are encouraged to grab tickets in the artist presale here. For real, I’m sure this will sell out! 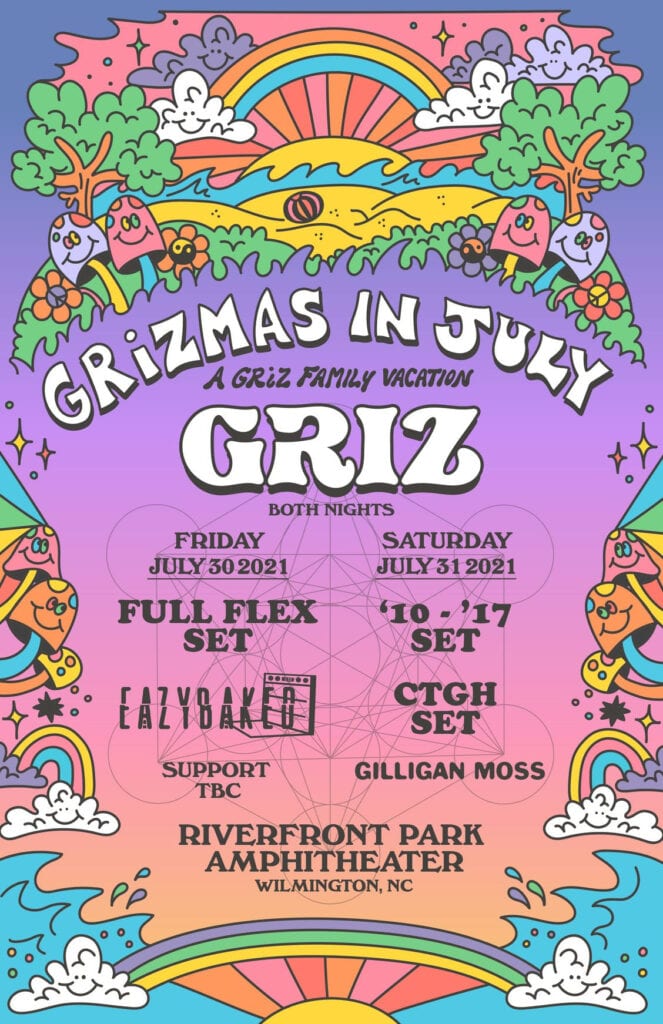 Get Those Tickets Now

Those who have been paying attention to other GRiZ show announcements post-lockdown will know that time is of the essence to secure tickets to ‘GRiZMAS in July’. The legendary ‘Space Camp’ in Hampton, Virginia and ‘Another World’ at Denver’s 1st Bank both sold out within a few hours of public on-sale signaling a pent-up demand for one of electronic’s most celebrated artists. The world is anxious to be back! These massive show reveals have rolled out amidst a series of huge singles from Grant including ‘Vibe Check’, ‘Ease Your Mind’ with Ganja White Night, ‘Bring Me Back’ with Elohim, and ‘Astro Funk’. With all of these tracks spanning styles and genres, it begs questions about what other technicolor anthems the producer has up his sleeve from a year in the studio…

‘GRiZMAS in July’ will be the first electronic show to take over the recently opened Riverfront Park Amphitheater and a fitting return to GRiZ’s eager Southeast fanbase. Wilmington offers idyllic weekend vibes, with fans having the chance to hit the beautiful local beaches by day and get down with their GRIZ fam by night. Act quick to plan your best weekend of the summer! We’ll see you there!

Posted in Festivals and tagged Chasing the Golden Hour, EAZYBAKED, Elohim, Ganja White Night, Giligan Moss, Griz, Kilamanzego
← Dirtybird Wants You To Get On The Road To CampoutFlight Facilities Announce: Never Forever →
Don’t forget to follow The Festival Voice for all of your electronic music and festival news!
Instagram: @TheFestivalVoice
Facebook: @TheFestivalVoice
Twitter: @thefestvoice
Snapchat: @thefestvoice
YouTube: TheFestivalVoice
We use cookies to ensure that we give you the best experience on our website. If you continue to use this site we will assume that you are happy with us eating these cookies.OkLearn more